Heroes of the Faith: Justin Martyr 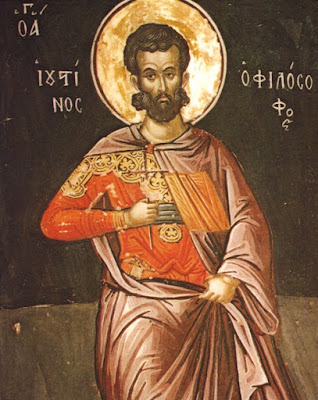 In your hearts revere Christ as Lord. Always be prepared to give an answer to everyone who asks you to give the reason for the hope that you have. But do this with gentleness and respect, keeping a clear conscience, so that those who speak maliciously against your good behavior in Christ may be ashamed of their slander.  - 1 Peter 3:15-16

You will seek me and find me when you seek me with all your heart.  - Jeremiah 29:13 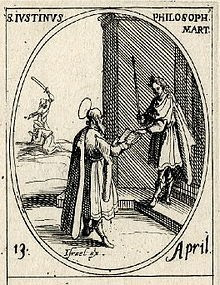 - Justin Martyr (c.100-165 AD) was one of the most prominent theologians and defenders of the faith in the early church.

- Justin was born to a Greek family living in Palestine, but did not encounter Christianity while he was growing up. Instead, he became a student of philosophy and followed a personal search for truth by exploring the dominant Greek philosophies of his day: Stoicism, Aristotelianism, Pythagoreanism, and Platonism. Still finding himself unsatisfied, he was converted to Christianity through the personal witness of a random stranger who convinced him that Christianity was the only true philosophy.

- Justin became a wandering philosophy teacher, setting up schools in Ephesus and in Rome. His teaching influenced several major Christian figures, including Tatian and Irenaeus. He wrote a number of books, including two “Apologies” addressed to the Roman Emperor and the Senate, as well as a philosophical dialogue with an Ephesian Jew.

The Problem with Christianity (from the Roman Perspective)

1.) Christians refused to sacrifice to the gods, and they would even deny their existence. Thus they were known as “atheists” and were seen as a public danger, because the gods’ wrath might fall on their cities because of their impiety. Christians also refused to sacrifice to the cult of the Emperor, which made them seem like traitors and a danger to the very structure of Roman society.

2.) Christians celebrated a secret rite with one another in which they claimed to eat the flesh and drink the blood of their founder. Rumors abounded about what was really going on in Communion, and many people suspected the Christians to be cannibals or morally depraved in other ways.

3.) Christianity was a new religion and a new philosophy, only 100 years old in Justin’s day. By contrast, the religions of Greece and Rome had been in place for a millennium at least, and all the major philosophies had been around for four centuries or more. For a culture that venerated antiquity as a mark of truth, Christianity’s newness made it seem suspicious.

Justin Martyr addressed these and other concerns in his two “Apologies” (a Latin word for a “defense” of the faith). He argued (1) that Christians are not atheists, because they honor the one true God; and instead of sacrificing to the Emperor, they offered prayers on his behalf to God Almighty. (2) Justin gives a lengthy explanation of Communion, in which he shows us that 2nd-century Christians did believe that the elements were indeed “transmuted” into the flesh and blood of Christ. But far from being cannibals or morally depraved, Christians are marked by the pursuit of virtue and the common good, going so far as to even pray for their enemies. He also noted that Christian ethics tended to teach the same things, or even better things, than the most revered Greek philosophies did. (3) And he made a case for Christianity’s antiquity, rooting it in the fulfilled promises made to Abraham, Moses, and all the prophets of the Old Testament. 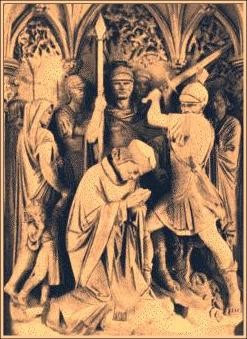 The Theory of the Logos

Justin takes the way that Jesus is described in John 1 as “the Word” (“logos” in Greek) and uses the idea to make a case for the goodness of philosophy. Logos was understood in Greek philosophy to mean the wisdom, the order, the logic of God—the principle of divine Reason that lay behind all things, held all things together, and revealed truth to all people, to whatever extent they were open to it. By making this case, Justin was able to claim for Christianity all the treasured wisdom of the Greek tradition:

“Whatever all men have uttered aright, then, belongs to us Christians.”

“He is the Word of whom every race of men partakes; and those who lived by their reason were Christians, even though they did not know it—such men among the Greeks were Socrates and Heraclitus.”

[Relating the story of his conversion:] “Straightaway a flame was kindled in my soul, and a desire came over me to know the prophets, and the men who were friends of Christ. And as I revolved [the old man’s] words in my mind, I decided that this was the only philosophy safe and serviceable. Thus, and for these reasons, I am a philosopher….If then you have any care for yourself and are seriously searching for salvation and believe in God, you may…learn to know the Christ of God and live a life of happiness.”

“We who once enjoyed the pleasures of lust now embrace chastity. We who once resorted to magical arts, now dedicate ourselves to the good and unbegotten God. We who prized above all else the acquisition of wealth and possessions, now bring what we have into the common stock, and share with everyone in need. We who hated and destroyed one another, and, because their manners were strange, would not live with men of a different race, now since Christ has come, live familiarly with them and pray for our enemies. And our endeavor is to persuade those who hate us unjustly to live themselves by the good precepts of Christ, that they too may become partakers with us of the same joyful hope of reward from God, the ruler of us all.”
Posted by Matthew Burden at 5:00 AM