The Story of Roger Williams: A Founding Father of America's Baptist Churches

Occasionally I'll post materials here relating to major figures or movements in church history. For more, you can take a look at my "Heroes of the Faith" page. 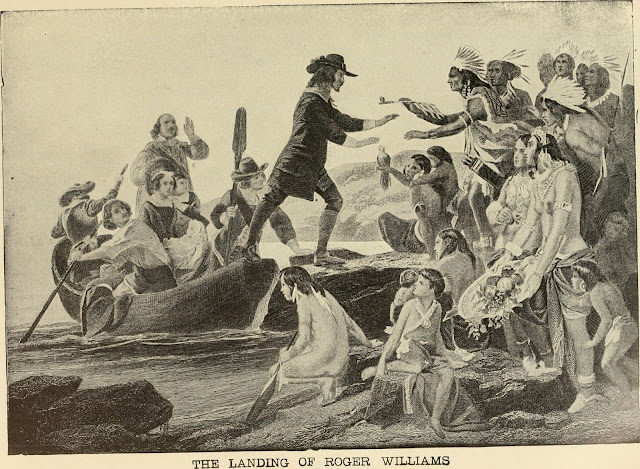 Roger Williams (1603-1683), the leading founder of America's Baptists, was a man constantly on the move--usually because he was being thrown out of one place or another. Early in his life, he became part of the larger exodus of Puritans fleeing the increased religious and political pressure on nonconforming Christians by King Charles I and his archbishop, William Laud. Puritans (and other nonconformists) were given a series of stark choices: either conform to the worship of the Church of England and cease to press for its reform, or undergo persecution by the state. There was one further possibility, though: one could move to New England, where a small community of Puritans had begun to take root. Many chose the last of these options, among them a young Roger Williams, already serving in ministry as a chaplain in the Church of England, along with his wife Mary. In 1631 they disembarked to a new life in Massachusetts Bay Colony.

Williams was initially well-received by the Massachusetts Puritans, and was invited to become the parish minister in the newly-founded city of Boston. But this was the point at which the Massachusetts colonists were first made aware of Williams’ opinionated self-assurance. He turned down the position, objecting to the fact that the Boston congregation was seeking to maintain official ties with the Church of England: “I durst not officiate to an unseparated people,” he wrote. The residents of Boston were offended by his refusal (and his subsequent acceptance of a post in the rival port of Salem), as well as by his accusations that their civil magistrates were inappropriately overseeing religious affairs. Boston’s bad feeling toward Williams ran so deep that they convinced the Salem congregation to withdraw its offer of a pastorate. So Williams decided to move to Plymouth Colony, which was led by a group of Separatist Puritans ("the Pilgrims"), who did not make great efforts to retain ties to the Church of England. This was rather more to his liking, but, after having lived there for a few months, he found that their attitudes toward separation were not as strong as his own, and he managed to speak out often and vociferously enough that he estranged his new neighbors and was forced to move back to Salem. “In less than two years in New England,” Williams' biographer Edwin Gaustad writes, “he had already managed to achieve a reputation for irascibility.” 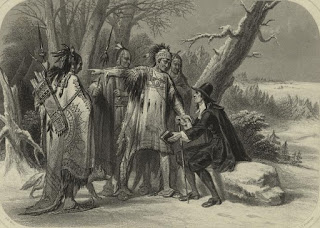 Amid all this early controversy, one of Williams’ most impressive abilities began to flower: he had a knack for understanding Native American cultures and languages, and he often seemed to prefer their company to that of his fellow Englishmen. Williams’ first book was not a work of theology or biblical interpretation; rather, it was a sociological treatise on the Native American cultures of New England, showing profound regard for their languages and customs. Within its pages, he advocated for better treatment for Native Americans and for honest legal recognition of their land rights. The governmental policy of the early United States would one day follow William’s lead on the issues of the separation of church and state; one wonders how its history might have changed for the better had it also followed his lead on Native American relations.

Back in Salem once more, Williams found some support this time, and eventually did take office as the pastor of that town’s congregation. There he continued voicing his opinions in the strongest way possible, running afoul of the Massachusetts Bay Colony on the issues of women’s veils, flags, legal oaths, the colony’s claim to a proper charter over against Native American claims, and, most importantly, the extent of state magistrates’ authority to prosecute ecclesiastical offenses. In 1635, the General Court of the Colony tried several means to get Salem to renounce its troublesome preacher; when that failed, he was simply exiled from the Colony altogether.

This event would prove to be the locus of a controversy that would extend for nearly twenty years, and which would result in voluminous writings on the subject of church and state authority, set down both by Roger Williams and his main antagonist, the Puritan pastor John Cotton of Boston. Their letters and, more importantly, their publicly-published treatises against one another, form one of the major primary sources for the emerging political and religious philosophies of the time. Even though, as historian Alan Simpson points out, Williams and Cotton agreed in “nine-tenths of [their] opinions” on theological matters, the one sticking point, of spiritual liberty vis-à-vis state authority, was so passionately held as to lead to years of long and bitter denunciations.

After a difficult winter of traveling in exile, Williams found his way to Narragansett Bay, where he laid the foundations of a settlement that would soon come to be known as Providence. Within a few short years, Williams had gathered a substantial following in his new colony, including some of his old followers from Salem and other independent-minded castoffs from the Massachusetts Bay Colony. Among them was a small group who had come under the conviction that the practice of infant baptism was unbiblical; Roger Williams, who had earlier expressed sympathy with the views of English Baptists, joined with this company and together they founded the first Baptist church in the colonies. Williams did not stay a Baptist for long, however, a decision that was perhaps as much about temperament—his “restless unsatisfiedness”—as about doctrine. The theological reason for this transition was his conviction that it was impossible to form a true, biblical, apostolic church under the current dispensation of history. He remained a faithful and outspoken Christian, however, and used his position as leader of the Providence colony to further his views.

His season of colony-building, however, did nothing to decrease the stress of his conflicts with his perpetual antagonists. In addition to carrying on his theological disputations with John Cotton, he was often also called upon to manage the power plays being made by the other rather thorny personalities that had gravitated to Narragansett Bay, to mediate in conflicts between colonists and Native Americans, and to establish a clear, legal charter for the new colony. The latter job was perhaps the most difficult, as it necessitated his return to England.

Coming to England for the complicated process of applying for a royal charter in the absence of a king (Charles I had recently been ousted, Parliament was in limbo, and Oliver Cromwell was soon to establish a de facto dictatorship), Williams found himself in the middle of a religious conflict that pitted Anglican, Presbyterian, and Nonconformists of all sorts against one another in the marketplace of ideas. Together with other influential voices, like the poet John Milton, Williams took the opportunity to speak out on issues of nonconformity and "soul freedom." As far as the charter went, Williams did what he could, and gained a legal charter from the highest governmental body available at the time, but the unstable political situation, coupled with a legal challenge from one of the other settlers of Narragensett Bay, necessitated one of Williams’ colleagues staying on in London for another fifteen years in order to make certain the charter was ultimately legitimized.

Williams returned to Providence and took up an official position as its governor, a job that quickly proved thankless. Nonetheless, after decades of hard work as a leader of the colony, Williams could boast a secure governmental system unlike any ever seen in the Christian world: freedom of religion was allowed to all (including non-Christians), and the state bore no authority whatsoever to adjudicate in ecclesiastical matters.

For the first hundred years after Williams' death, rival positions regarding him continued to fall along “party lines”—Congregational thinkers lined up against him, Baptists for him. But after the acceptance of the Bill of Rights as part of the foundational document of the American experiment, Williams’ role began to emerge in an ever more positive light. He had anticipated the social and philosophical necessity of the First Amendment more than a century before it came into being, and his views on church and state, which were unspeakably radical for his time, have now largely become the accepted mainstream view of all Western society.
Email ThisBlogThis!Share to TwitterShare to FacebookShare to Pinterest
Labels: History
Newer Post Older Post Home