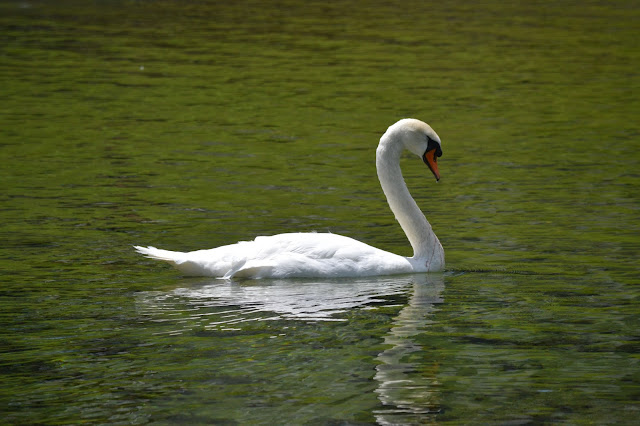 Swans are widely acclaimed as among the most beautiful birds in the world. And they are. Other birds may be more colorful, have fancier plumage, or a more striking aspect. But there is an elegant grace about swans, a purity that, in and of itself, amounts to beauty. They have been appreciated for their elegance throughout the centuries, and have long been held as a powerful symbol of Christian truth. But before we dive into that, here's a few interesting facts about swans that you might not have known:

- There are six species of swans in the world, four of which represent the pure-white, northerly birds that most people think of. The Mute Swan of Europe (which has an orange knob on its bill) is the most familiar of these, as it has been widely domesticated and is often found in city parks throughout the world. Three other white swans migrate back and forth toward the arctic regions of the northern hemisphere: Whooper Swans (Eurasia), Trumpeter Swans (North America), and Tundra Swans (the latter of which has sometimes been referred to by two other names: Whistling Swans for those that occur in North America, and Bewick's Swans for those that occur in Eurasia). In the southern hemisphere, there are two more swans, both of different coloration: the Black Swan of Australia (which can also be found elsewhere now, since it was exported as an ornamental bird), and the Black-Necked Swan of South America. 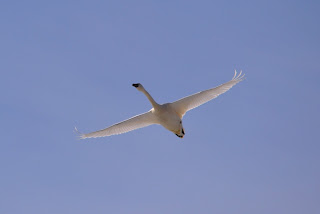 - They are among the heaviest flying birds in the world, with some specimens registering slightly more than thirty pounds (by contrast, most of the large eagles in the world are in the ten-to-fifteen-pound range). The wingspan of a Trumpeter Swan can approach ten feet in the largest specimens. There was once a captive Mute Swan that would have easily held the record for the heaviest flying bird, at 51 pounds, but it was unclear if that particular bird could actually manage to get airborne anymore.

- Swans are one of the bird species that tend to form monogamous, lifelong relationships, and so they have been used as a symbol of faithfulness or of love (and in that guise often appear in classical art with Aphrodite/Venus).

- In medieval England, Mute Swans were considered the property of the Crown. It required a special license to raise and sell swans. There was even a royal officer, the Swan Master, commissioned for the enforcement of these laws.

- Swans have long been central symbols in many works of art. Mythological stories about swans abound, including Zeus' transformation into a swan in his seduction of Leda (of which many classical paintings were made); the legend used by Hans Christian Andersen for his story "The Wild Swans"; and the widespread north-European myth of the swan maidens, a version of which forms the basis of Tchaikovsky's famous Swan Lake. One of the most popular authors of children's books, E. B. White, wrote a major novel about these birds: The Trumpet of the Swan (it was this blogger's favorite book for several years during his childhood). Swans have also featured large in poetry, as in Yeats' "The Wild Swans at Coole," where the poet cries out, "I have looked upon those brilliant creatures / And now my heart is sore." 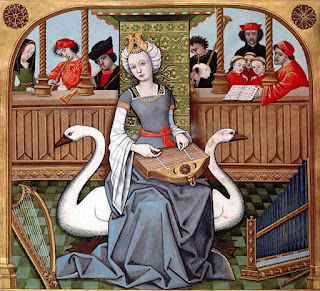 - One particularly entrenched legend about swans is that of the "swan song" - the belief that a swan is mostly silent throughout its life, but, at the moment of death's approach, will give voice to a beautifully musical song. "The wild swan's death-hymn took the soul / Of that waste place with joy / Hidden in sorrow" (Tennyson, from "The Dying Swan"). This belief in swan's habitual silence, at least until death, is one of the reasons why the widespread European swan is named the "Mute Swan" (despite the fact that it can make a variety of noises, including hissing and grunting). Anyone who has been around other varieties of swan can attest to the fact that they are certainly not silent (as evidenced by their names: "Trumpeter" and "Whooper"). Though Mute Swans do not "sing" when dying, there is a slight possibility that the other European swan, the Whooper, may form the basis of the myth, which goes all the way back to ancient Greece. In any case, the legend has gone into popular culture, and a "swan song" may now refer to any final performance or accomplishment. 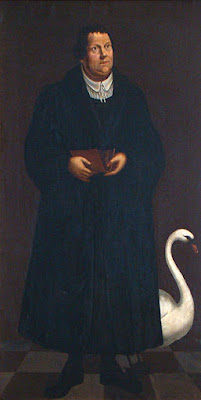 The swan's connection to Christian symbolism focuses largely on the bird as an icon of purity, though there are sometimes allusions made to the "swan song" legend and its parallel to Christ's passion. In the same way that swans were thought to remain silent, and then to cry out at the moment of death, so too Christ was silent during his trials and tortures, until finally crying out to God from the cross just before he died. The swan can also appear as the symbol of a particular saint, such as Martin Luther or Hugh of Lincoln, who are often accompanied by swans in paintings.

Usually, though, when the swan appears in Christian art, it is acting as a symbol of purity. In the same way that a swan's plumage is uniformly white, so too Christians are washed white through the cleansing of the blood of Christ, which takes away the stain of our sins.

Below are renditions of two famous musical pieces inspired by swans (the theme from Tchaikovsky's Swan Lake, and Camille Saint-Saens' "The Swan"). As you listen to them, or whenever you might happen to see a swan, give thanks for the great truth of our salvation: that we have been rendered pure and holy, free of any stain of sin, because of the redemption wrought by Christ.