(Note: This article was originally posted in 2015)

Here's a painting I find very interesting: "Dante in Exile," by the Victorian artist Frederic Leighton (1864). 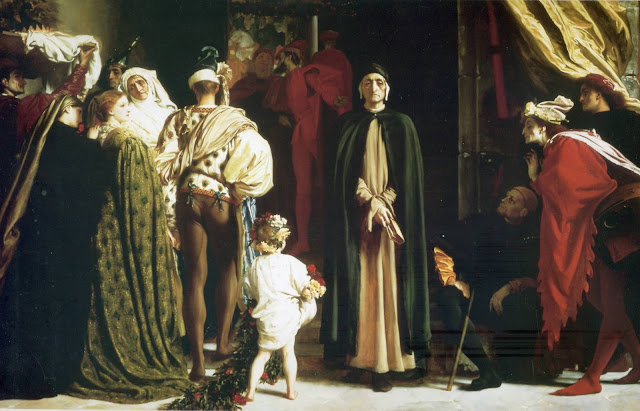 One immediately senses the tension in the painting: Dante (the black-cloaked figure in the center) faces directly toward us; while the other characters are moving elsewhere, mostly toward the room behind him. At first glance, one would think that this shows Dante's exclusion, his loneliness in his place of exile. But a second glance shows that this isn't entirely the case: many of the participants, though moving past Dante or turned in a different direction than him, are in fact looking at him: the child in the foreground, the young woman in the passing group, and the seated man to Dante's left. Even the red-cloaked man up in the room behind seems to be talking about Dante, gesturing toward him with his hand. Dante, though alone and opposite the flow of everything around him, is nevertheless (or perhaps, because of this) the object of everyone's attention.

So what is this all about? A quick history lesson: Dante, of course, is the Italian poet famed for writing "The Divine Comedy," (Inferno, Purgatorio, and Paradiso), one of the greatest literary works of all time. But he was also a political figure, having been a leader and supporter of the White Guelph faction in his hometown of Florence, and it just so happened that in 1302 the White Guelphs were exiled from Florence. Dante spent the rest of his life in exile in Italy, starting in Rome and ending in Ravenna. It was during his long exile that he wrote his masterpiece.

This painting by Leighton shows Dante's exile in beautiful detail--in particular, it encapsulates Dante's resolution that drove him to write. A quick glance at Dante's figure may show him as sort of a passive character, with the world passing him by. But this is merely an illusion. It is precisely his posture against the flow of the world around him, against the worldly revelry, that makes up the theme of the first canto of The Divine Comedy. His face is mournful, brokenhearted at his exile, but it is also resolute--it will not attend to the bustling cares of this world. His folded hands seem at first to be submissive, resigned. But this too is an illusion, for in his right hand he holds a book, his finger already marking a place within it; and it is with a book that he will make his stand against the ways of the world.

Perhaps the subtlest detail of all, though, is his feet. Everything about Dante is static except his feet. One would have guessed from his posture that his feet would have been together, but no, he seems to be stepping forward with his left foot. This is, in fact, an allusion to a line in his first canto, as he describes his decision to find the straight path that he had lost: "I dragged my stronger foot and limped along" (Inferno I:30). The dragging of the foot is taken to be a symbol of the way Dante feels rooted to the old life, to the ways of the world, and that impulse is stronger than his affinity for pursuing the way of faith; nevertheless, he resolves to step forward, even if it means dragging along that old, worldly part of himself.

Exile is never an easy place to be, and the painting shows us that. But by putting into imagery the very mood of Dante's first canto, it also reminds us that we are all in exile. Every one of us has lost the straight path, and we find ourselves "in a darkened wood." It is our choice whether to go along the easy path of following the world into its spiritual exile of vice, or of dragging our unwilling selves up the hard mountain toward virtue.
Email ThisBlogThis!Share to TwitterShare to FacebookShare to Pinterest
Labels: Devotional Reflections, Paintings
Newer Post Older Post Home