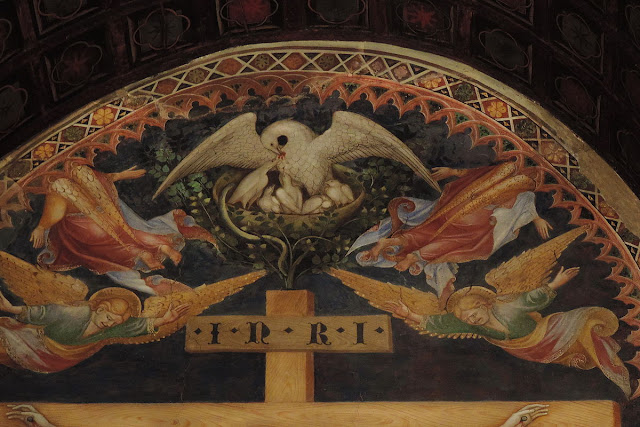 (A crucifixion scene with a stylized pelican nest above the cross; image credits appear at the bottom of the post)

Even people who don't know much about birds can pick out a pelican. Its odd, ungainly shape stands out in peculiar relief from its fellow members of the bird family. We learn from childhood how pelicans are able to scoop up huge mouthfuls of fish straight out of the water, thanks to the titanic pouches under their bills. But what you may not know is that the pelican is one of the oldest artistic symbols of the sacrifice of Christ. This association was so popular that Dante, when writing a scene at the climax of his Divine Comedy, in which the pilgrim is viewing the highest stages of heaven, referred to Jesus himself as Nostro Pelicano ("our pelican," Canto XXV of Paradiso). We'll get to the reasons behind that symbolism in a bit; but first, here's some interesting facts about pelicans you may not know:

-  Two species of pelicans, the Dalmatian and the Great White, are among the largest birds in the world, with wingspans that can reach up to eleven and a half feet.

- The throat pouch (which has its own name, a gular) not only serves to scoop up food; it is also filled with blood vessels in order to act as a built-in cooling system for the bird on hot days. It's also so sensitive that some species of pelicans can use it to fish even in complete darkness. 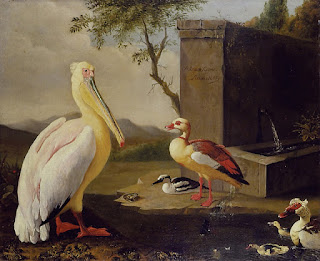 - Pelicans are ingenious and varied in their hunting methods. Some hunt socially, swimming along bodies of water in synchronized groups and using their bills and wings against the water until large schools of fish are corralled into a single area. Others will hunt by plunge-diving, lancing downward from a significant height in the air to splash down and scoop up a fish from below the water's surface. After filling up its pouch, a pelican will wait for the water to drain out slowly, and then will swallow the fish trapped inside.

- Pelicans can hold an enormous amount in their pouches. The Brown Pelican, for instance, can hold up to ten liters of water. If that doesn't sound like an extraordinary amount, consider that that amount of water weighs about 17.5 pounds, while the biggest brown pelicans themselves only get up to about 12 pounds.

- In rare instances, pelicans will prey on other birds. Unfortunately, this sometimes includes chicks of other nesting seabirds. More happily, though, they've also been observed performing the noble public service of swallowing feral pigeons in St. James' Park, London. 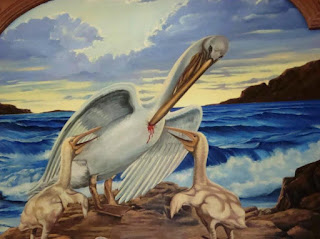 - Pelican chicks are fed in the same way as most large seabird chicks; that is, by regurgitation. However, pelicans have some peculiar quirks in this regard, which led to the growth of medieval legends about them. In some species, a parent bird may grab the chick by the neck and drag it about roughly before feeding; occasionally, pelican chicks will also swoon or have a seizure around feeding time, knocking them unconscious. Though these two quirks are unrelated (scientists don't actually know what makes pelican chicks swoon), ancient observers combined them into a legend in which pelican chicks, at the point of death due to the abuse of their father, are revived by a sacrificial act by their mother. Pelicans will feed their chicks by disgorging partially-digested food, and often this requires the chicks to stick their heads into the parent's throat. Add to this the fact that the Great White Pelican can have a reddish tip on the end of its bill, and the legend grew that the mother pelican saves her chicks by cutting her own neck with her bill and letting her chicks revive by drinking her blood. This belief is even alluded to in a line of Shakespeare: "I'll ope my arms and, like the kind, life-rendering pelican, repast them with my blood" (from Hamlet, Act 4). In artwork, a mother pelican feeding her chicks in this manner is said to be "in her piety." (However, since Western Europeans knew of this legend only from texts, and were unfamiliar with the bird itself, their paintings of "a pelican in her piety" sometimes look rather more like a mixture of an eagle and a swan than like a pelican.)

This leads us to the Christian symbolism of the pelican. Because of the ancient and medieval legends about how pelicans feed their chicks (based on real, observed behavior, though misinterpreting it), the pelican became a symbol of sacrificial death and life-giving blood. Pelican feeding behavior became a natural allegory of the Gospel--just as a father pelican was thought to abuse its chicks to the point of death, so our natural father (Adam) left us in such a plight of sinfulness that we were spiritually dead. Then came Christ (the mother pelican), who willingly shed his own blood and suffered death to make us spiritually alive again. As such, the mother pelican became a symbol of Christ, and specifically, of the Crucifixion and of Communion (Eucharist). It can also be used, more generally, as a symbol of charity (self-giving love).

Though the allegory is based on a faulty interpretation of pelican feeding behavior, it's certainly true that the behavior of parent pelicans tending to their offspring is caring to the point of self-sacrifice. Birds of all kinds expend tremendous energy on gathering food for their chicks. Let this be a reminder to us of the constancy of God's loving attention toward us, shown most fully on the cross of Calvary, where Christ shed his own blood to make us alive.