God and Country: The Dangers of American Patriotism in the Church 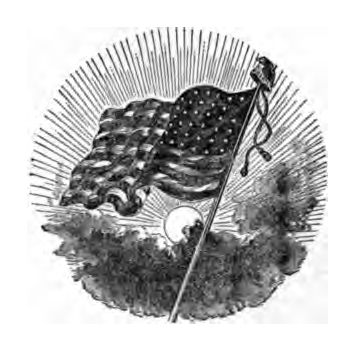 (Note: This is a reblog, lightly edited and updated, of a post originally written in 2010)

The church that I pastor has traditionally been a very patriotic church. There are a large number of veterans among our members' families, and the congregation often makes its national pride felt through such means as our special Memorial Day service and a wall in the fellowship hall honoring our veterans. For many years, the kids in our Sunday School were asked to recite the Pledge of Allegiance to the American flag in church. Such things aren't necessarily out of place, but they need to be considered carefully. Today, I want to focus on some basic pastoral concerns I have about holding American patriotism and Christian faith a little too tightly bound together.

First, a few clarifications at the outset. This isn’t a critique of our church as such—it’s entirely understandable, even laudable in some sense, to honor veterans and to love our country. If there’s a fault here, it’s not a major fault. It’s rather the simple difficulty that arises from conflating two loves which probably ought to be held separately. The second clarification is simply to note that much of my reflection on this subject has been shaped (but not fully determined) by Anabaptist influences, the branch of the Christian tradition in which my wife grew up.

To put the matter in theological terms, we Christians are the citizens of two very different kingdoms—the Kingdom of God, and our earthly societies. And I believe our allegiance to the Kingdom of God should be held quite free and separate of our political allegiances. Christ instructed us to give both kingdoms their due (“Render to Caesar the things that are Caesar’s, and to God the things that are God’s”), but I don’t think he had in mind festooning church sanctuaries with Roman banners and emblems. Now, when I say that our allegiances should be held separately, I mostly mean that our political allegiances should not be allowed to invade our Christian faith. Our faith, however, should inform and influence and shape our political allegiances. Why? Because our citizenship in the Kingdom of God is the higher of the two loyalties. My identity as a Christian is eternal; my identity as an American is a passing affair. Some day my Americanism will simply be part of the beautiful diversity of the “melting pot” of heaven. I don’t expect that the USA will exist in the new heavens and the new earth for us to treasure and extol. But the church will persist. Christ’s kingdom will persist. So that’s where my highest loyalty lies. Thus my faith—my deepest identity—invades and determines my political allegiances, not the other way around. Our Christian identity is fundamental; our American identity is secondary.

And because the Kingdom of God is our highest loyalty, I consider it to be inappropriate to pledge allegiance to anything other than God himself in our churches. While the Pledge of Allegiance is fine and proper in other contexts, the church is an assembly of the Kingdom of God, and it is inappropriate for us to pledge allegiance to the US here in our churches. It is just as inappropriate as it would be for the whole US Senate to swear oaths to a Masonic order or their local Rotary clubs from the floor of the Senate chamber. The two things simply ought not to be put together, regardless of how appropriate or meritorious they may be elsewhere.

Thus I take my position against the saying of the Pledge of Allegiance in church, regardless of the circumstances, and against having an American flag flying outside on church property. (There is an American flag inside the sanctuary, but that’s such an old tradition that I’m not sure it’s worth the bother of dislodging it, and it’s happily tucked away into a corner sufficiently far away from the pulpit and altar.) The honoring of veterans in church is not quite as troubling. From my theological perspective, we must guard against such a practice being an extension of the cult of Americanism into the church, but as a celebration of community members who have made heroic sacrifices for the common good, I find it perfectly acceptable.

It’s worth remembering that Christ himself absolutely eschewed any taint of politicism or patriotism in his ministry. And his ministry, his example, is the foundation of the church. We should note that Christ could have easily encouraged patriotism in his church—his home country, after all, was Judea, populated by the chosen people of God. And everyone expected the Messiah to be a highly political, patriotic figure. Even one of his disciples was a Zealot, a Judean patriot. But although Jesus certainly focused his ministry on the Jews, there was no trace of patriotic nationalism whatsoever in what he did. In fact, he told Pilate quite plainly, “My kingdom is not of this world.” If Jesus himself, the Messiah, declined the patriotism that everyone thought would be proper and laudable for the Messiah, shouldn’t we be wary of conflating patriotism with faith in our own lives?

To make my case clearer, allow me to point out a few of the potential dangers of allying our American loyalties too closely with the practice of our faith:

First, and perhaps most troubling to me, it leads to a loss of the deep connection we should have with our brothers and sisters in Christ all around the world. We are more intimately connected (in a spiritual sense) with Christians in Swaziland than with our American neighbors, and our family loyalties should lie more strongly with the global church than with the USA. But in practice, this is seldom seen in American churches. During the Iraq war, all one heard about was the Americanist/political news. How many Christians were aware of the effects of the war on the native Iraqi Christian population? (In brief, the war was devastating for them, and several native church groups which stretched back more than a millennium and a half and constituted a decent minority of the Iraqi population a few years ago are now all but gone, forced to emigrate out because the war has raised Muslim/Christian tensions and made their ancient homeland unlivable.)

Second, it forces us to lose some of our prophetic voice against the abuses of the American system. Part of the mission of the church is to stand against injustice, but that can be hard to do if we conflate American patriotism and the faith. We too often shy away from denunciations of the ill effects of our materialism on other countries or from apologies for past American atrocities (against the Native Americans, for example), because such things make us sound “unpatriotic.” And so we mute the voice of the church.

Third, we tend to associate the enemies of America with the enemies of the church, and we lose the ability to love and pray for our enemies. Christ himself commanded us to love our enemies. But how many American Christians do you know who pray for the salvation of ISIS terrorists? According to Jesus, that’s what we should be doing, but our Americanism has too often blinded us to that calling. Far too many American Christians seem to believe that Muslims are our enemies, rather than the objects of our missional love and compassion.

Fourth, it leads to a tendency to associate American causes (especially wars) with righteous motives, whether or not that is the actual case. Fifth, it perpetuates the conflation of Americanism and Christianity in the eyes of other countries (much to the detriment of Christianity). When I was serving in missions in North Africa, I found it a fairly common assumption that Christianity was characterized by Hollywood, pornography, materialistic greed, and so on, mostly because Muslim countries associate the USA with Christianity, and we Americans (unfortunately) have only reinforced that assumption with our “God and country” syncretism. Sixth, it creates an unwelcoming environment in our churches for non-American Christians in our midst, especially those who might harbor justified resentment against America.

Seventh, it leads us to believe that certain American customs and morals are actually Christian, when in fact they are merely “optional” cultural add-ons to the Gospel or actually run against it (individualism, nuclear family systems, capitalism, “the American dream,” ways of dressing and eating, etc.), thus setting extra barriers in the way of experiencing the full force of the Gospel in our own lives and leading to an attitude of judgmentalism against those who practice the faith in a different cultural context. We are fostering the darkest kind of ethnocentrism—that which is fueled by ignorant religious opinion. And eighth, we run the risk of raising a generation who will be too subservient to American patriotism (the lesser of the two loyalties) when American interests run against the interests of the Kingdom of God.

These are just a few potential dangers, and I think they’re real enough to give us pause when we consider adding outward shows of American patriotism to our churches.
Email ThisBlogThis!Share to TwitterShare to FacebookShare to Pinterest
Labels: Church Life, Culture, Theology
Newer Post Older Post Home