"My Grace Is with You" - Christ's Call to India Bears Fruit

(Image credits appear at the bottom of the post)

This is the second in an ongoing series on the startling growth of Christianity around the world; the first piece, concerning Christian expansion among Muslims, can be found here.

As schoolchildren, many of us were taught that India was one of the primary "cradles of civilization" in the ancient world--an area so massive it's called a subcontinent, with a population so large it will soon become the biggest in the world, it is also host to one of the Earth's most ancient and impressive cultural traditions. But it's not just a cradle of civilizations, it's a cradle of religions, too. It was in India that Hinduism was born, and Buddhism, and Jainism, and Sikhism; and it was also in India that Islam flourished into one of its most remarkable forms (the Mughal Empire, best known to westerners for its renowned architectural jewel, the Taj Mahal). But for all that diverse religious flowering, it has often seemed to many onlookers that there is one glaring absence: Christianity. In the land that gave birth to the Protestant missions movement, the scene of William Carey's and Henry Martyn's labors (as well as many others), Christianity often appeared to be a miniscule, almost irrelevant piece of the religious puzzle that is India. 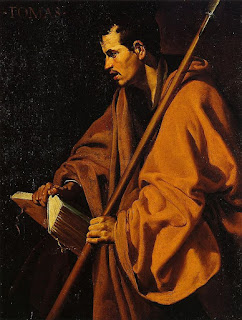 But that impression actually isn't true. It's certainly not true now, and one could argue that it has never been true. As we take a look at the surprising story of Christianity in India, let's begin at the beginning. One of the wildest, most wonderful stories of first-century Christianity (and one that doesn't get told often enough) is the account of the Apostle Thomas taking the Gospel to India. That's right: at the same time that Paul was planting churches and writing letters around the Mediterranean, good old "doubting Thomas" was doing pioneer missionary work in India. This story is attributed in multiple places in ancient Christian texts, and seems to be fairly reliable (the historian Samuel Moffatt rates it as being equally reliable as the tradition that Peter ended up in Rome, which is seldom disputed). The background to this, incidentally, is a very old tradition that the twelve apostles took literally Jesus' Great Commission, and that, at some point during the first few years of the Jerusalem church, divided the known nations of the world among themselves, and then went out on their various missionary labors. This tradition explains, by the way, the odd fact that all of Jesus' original twelve disciples disappear from the narrative of the book of Acts after the first few chapters (with the exception of Peter, but even in his case, he does not retain leadership of the mother church, but rather goes out on an itinerant ministry). 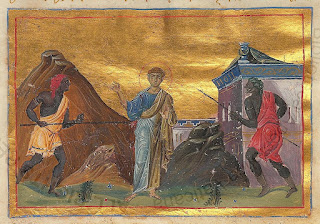 While the story of Thomas going to India is well established, the exact narrative of that journey may have gathered some legendary elements around it over the years. Nonetheless, it's a marvelous read: Thomas initially protests, not wanting to take up his assignment to India, even after Jesus directly appears to him with that commission ("Go to India and preach the word there, for my grace is with you!"). So Jesus forces Thomas' hand by appearing in the marketplace and selling Thomas as a servant to an Indian merchant, after which, of course, Thomas submits to the Lord's will. Thomas preaches the Gospel in the courts of King Gundaphar, then plants churches down the coast of Malabar and Kerala, and finally even treks over to the eastern side of the subcontinent, preaching as he goes, until finally dying at Mylapore. (He was speared to death there, which is why Saint Thomas often appears with a spear in paintings).

One of the neatest things about this story is that it isn't just something that happened in the mists of time 2000 years ago. The ministry of Thomas in India still bears fruit today. When European missionaries arrived on the coasts of India in the 15th and 16th centuries, they were expecting to find a wholly pagan society, having not had direct contact with Indian Christianity for centuries. Instead, they found an established network of churches in the region of Kerala, all claiming to have been founded by the Apostle Thomas, and having kept the flame of Christian faith alive in their land for fifteen hundred years. This community of Christians (the Mar Thoma Churches) remains a vibrant piece of Indian Christianity to this day. One of the greatest evangelical Christian leaders of the world today, K. P. Yohanan (founder of Gospel for Asia), came to faith as a child in the Thomas churches of Kerala. So, with roots that go back to the twelve disciples themselves, India has a far longer tradition of Christian civilization than does most of Europe. 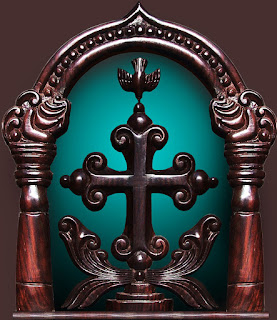 Christianity coexisted in India alongside Hinduism, Buddhism, and Islam for many centuries. In the first millennium AD, the (Nestorian/Assyrian) Church of the East spread and consolidated the faith through much of southern, central, and eastern Asia (going as far as China, in fact), often keeping in close relationship with the Mar Thoma churches. These Church of the East missionaries were so influential that some historians have begun suggesting that they even shaped the development of other religions as well--David Bentley Hart, in his recent history of Christianity, suggests that the peculiar theological and practical attributes of Tibetan Buddhism (in contrast to Theravada Buddhism) might be due to influence from Christian missionaries in the first millennium AD. When European missions to India began arriving in the second half of the second millennium AD, other branches of Christianity laid down deep roots as well. The Roman Catholic church has a strong presence there (India, as is well known, was the scene of Mother Teresa's labors), and Protestant churches began to grow too, introduced under British colonial rule (though often in the fact of opposition from the British East India Company). By the end of the nineteenth century, there were many indigenous Christian leaders, like Sadhu Sundar Singh, who shaped not only Indian Christianity but inspired and instructed Western Christians as well.

Once we reach the twentieth century, the story picks up pace. Christianity swept through the tribal populations of northeast India. Nagaland, a state of nearly two million people, is now 90% Christian. Conversions to Christianity began there less than 150 years ago, with the labors of American Baptist missionaries, and then a major revival swept through the region in the 1950s and '60s. Another of these northeastern Indian groups is the Hmar, who once had the reputation of being the most fearsome headhunters in the British Empire. But in 1910, they were visited for just five days by an Anglican missionary, and the Gospel took root. Growing from that one brief visit, the Hmar people are now 98.5% Christian, and have given our faith one of its greatest 20th-century evangelists and missionaries, Rochunga Pudaite, the founder of Bibles for the World. 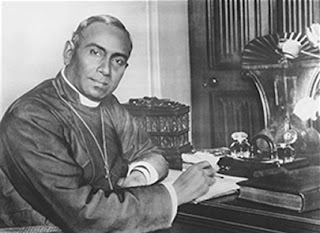 And it's not just conversions among the tribal peoples that are driving the growth of Christianity in India. During the 20th century, there was a massive movement of converts from Hinduism, particularly among the Dalits. The Dalits are the lowest class in the Hindu caste system, the so-called "untouchables" relegated to the lowest and most humiliating of social roles. In the 1920s and '30s, they started coming to Christ en masse, sparked by the evangelistic preaching of a native Anglican bishop, V. S. Azariah. In his area, Andhra Pradesh, over twelve thousand new converts joined the church every month for an entire decade! For this period, the growth rate of Indian Protestant Christianity was a staggering 41%. (To provide a contrast, consider that the current global growth rate for evangelicalism, 2.6%, is considered remarkably high.) This wave of conversions was so vast that it alarmed Mahatma Gandhi, who was trying to present a united Hindu front in the nationalistic struggle against Britain--indeed, it worried the venerable Gandhi so much that he reportedly began viewing Bishop Azariah as a personal enemy and threatened the possibility of state controls against conversion. This revival, and its continuing growth to the present, is so widespread that a full 70% (or more) of current Christians in India come from a Dalit background.

But it's not just the Dalits. There have been concerns among missiologists that perhaps Dalits were converting to Christianity as a way out of the repressive caste system, and that members of other Hindu castes would come to associate Christian faith with something only for the lowest members of society. Thankfully, we're seeing that those impressions are not intractable obstacles. The first signs of a trend of conversions from middle- and high-caste Hindus are emerging. Christian growth in India is starting to touch all levels of society. In the two decades between 1990 and 2010, the growth of evangelical population in India was greater than 100%! Major ministries like Operation Mobilization have reported a tenfold growth rate in their church-planting work. Christianity Today recently ran a feature article proclaiming the church in India as "the world's most vibrant Christward movement."

Our Lord has been reaching out to India since the beginning of the Christian era, and we live now in the most exciting phase of the church's life in that great land. Pray for the continued growth of the church in India, because there's much work yet to be done, and pray for the safety of your brothers and sisters in Christ against the rising threat of persecution.