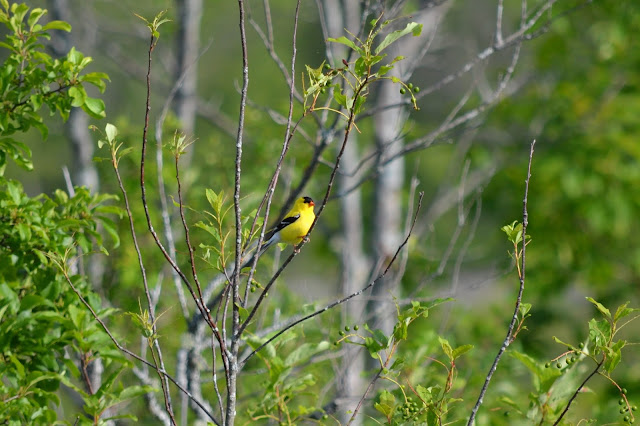 The goldfinch is a bird that's common at feeders, well-known and beloved by many. But what you may not know is that this favorite backyard bird has a long history of symbolism in Christian art. This bright, sprightly little bird, especially in its European variety, came to be a reminder of Christ's passion. Before I explain why, here's a little bit of background and a few interesting facts about the goldfinch.

- Goldfinches are widely known in two species, the European Goldfinch in the Old World, and the American Goldfinch in the New. But there are additional species called "goldfinches" beside these two widespread and well-known instances, including Lawrence's Goldfinch and Lesser Goldfinch, both in the Americas. In actuality, however, the name is rather arbitrary: the European goldfinch is more closely related to some other Old World finches, and the American goldfinches are closer to the siskins, than either is to the other. 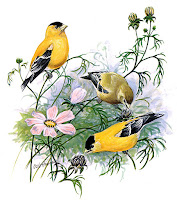 - Goldfinches, like many other members of their wider family of finches, can have some of the most beautiful, complex, and varied song repertoires of the bird world. Finches are also noticeable for the wide adaptation of their bill size and shape, which come customized to many different food sources (and even include some true oddities, like the crossbills, whose bills really do curve and cross at the ends, an adaptation perfect for prying seeds from the depths of pine cones). It is to finches that we owe the scientific legacy of Charles Darwin, who, whether you love him or hate him, has had enormous influence throughout the biological sciences. He was first sparked to consider evolutionary adaptation because of the variation in bills that he saw in Galapagos finches.

- Goldfinches have been prominent inspirations in the history of art even outside of their Christian symbolism. They appear in classic paintings, in folk art (such as the "distelfink" of the Pennsylvania Dutch artistic tradition), and in music. At the bottom of the post, click on the video to listen to Antonio Vivaldi's marvelous concerto for flute and strings, "The Goldfinch" (Opus 10, No. 3).

- One of the group names for goldfinches (in addition to general bird group names like "flock") is a "charm." 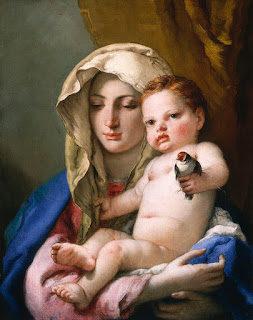 In Christian symbolism, goldfinches came to symbolize Christ's Passion--and specifically, the tortures of his crucifixion. Why? Well, most homeowners with backyard bird feeders might be able to connect the dots. The favorite food of goldfinches, far and away, is thistle seed (often called nyjer seed when sold for bird feeders). Thistles, being prickly, are a reminder of the crown of thorns. The scientific names for goldfinches allude to this tradition: the European goldfinch, carduelis, has a name meaning "thistle," and the American goldfinch, tristis, has a name meaning "sorrowful." Additionally, the European goldfinch has a bright red face, calling to mind the blood of Christ.  In Renaissance paintings, a goldfinch often appears in scenes of Christ as an infant or toddler (usually being held in Jesus' hand)--a reminder that the Incarnation is inextricably tied to the Crucifixion. Other symbolic associations also occur, such as goldfinches representing endurance or fruitfulness, but the connection with Christ's crown of thorns is the most prominent symbolic meaning with which this bird is endowed.

So when you see those brilliant bursts of gold fluttering around your thistle feeder, let it remind you of the way that Jesus' death has brought forth beauty, grace, and all the golden glories of eternal life.