What is "Faith"? A Response to Neil deGrasse Tyson 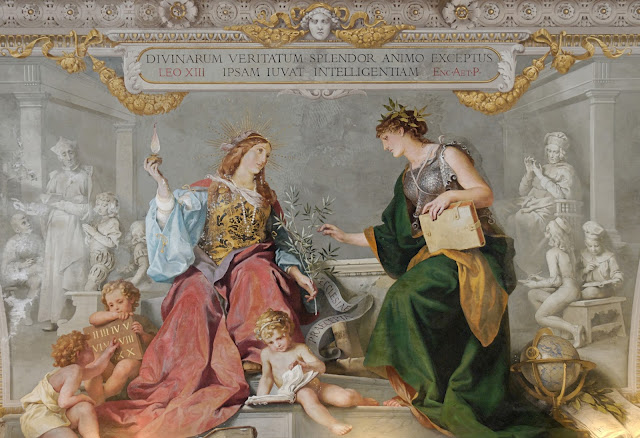 A couple days ago, I stumbled across this recent clip from eminent cosmologist/astrophysicist/pop-culture science guru Neil deGrasse Tyson, where he briefly outlines his thoughts on God. I should say at the outset that I have great respect for Dr. Tyson, and have learned much of the little I know about cosmology from his tutelage. He is brilliant, thoughtful, and winsome--an unfortunately rare combination these days. However, his reflections in this clip betray a couple popular misconceptions about Christian belief, misconceptions often repeated by Christians themselves, and they're worth clearing up.

Early in the clip, Dr. Tyson states, "If you were certain there's a God, you wouldn't have to call it 'faith.'" Now, he's not necessarily wrong to infer that "faith" is a word that stands in contrast to "certainty"--it's often used that way in modern English parlance. But we Christians don't actually base our religion on the way words are loosely used in modern American English; we base it on the words of Scripture. And it's important to understand that in the New Testament, "faith" is not a word that connotes a lack of certainty, a leap undertaken where logic or evidence are unable to be found. Unfortunately, American evangelicalism has long talked about "faith" and "belief" in the way Dr. Tyson assumes: "Just believe"..."Take a leap of faith," and so on. We even misinterpret the famous verse from Hebrews, "Faith is...the evidence of things not seen" (11:1), and imply that it means that faith is simply believing in something where there is no visible proof that it exists (rather than what the verse plainly says, declaring that "faith" is itself something substantive, something of clear evidentiary value to prove the existence of the things we believe in).

So...what is "faith," then? If it's not mere "belief," but something solid, substantial, and evidentiary, then what is it? The Greek word for faith is pistis, which has a range of meanings that include the ideas we normally incorporate into our modern words of "faith" and "belief." But it also encompasses a broader network of ideas, and it's those ideas that the New Testament tends to lean on. This biblical usage of the word has more in common with the old English way of speaking about faith--of its being something substantial, a community to which one belonged.  You could be "in the faith" or a "defender of the faith." Faith wasn't just some airy act which the nonphysical elements of our being performed; it was a thing--a community of belief to which one belonged, a network of allegiance to the Kingdom of God. We still retain this old English sense of the word when we speak about "faithfulness." When I vow to be "faithful" to my wife, I'm not declaring that I will continue to believe in her existence even in circumstances where rational evidence may fail me. No, I'm saying that I will continue on in this relationship of loyal trust. That's much closer to the New Testament idea of faith--it was the covenant loyalty of human beings, responding to the covenant loyalty of the God they knew, deeply and intimately. In fact, modern Bible scholars have been making a strong case over the past couple decades that in many (if not most) of the places where our New Testament translations talk about "believing in Christ" (implying that faith is an act of spiritual will on our part), it should actually be translated as referring to "the faith[fulness] of Christ" (i.e., something Jesus did, not just something we do).

Thus "faith" becomes far more than a simple act of unreasoning belief--it is a communal relationship of loyal trust to Christ, who was revealed to us as the Son of God by the evidences of history, and it is based on his great act of covenant loyalty towards God the Father and towards us. If anything, "faith" implies that we do know that God exists, because we have seen him revealed in Jesus Christ and have entered into a relationship of loyal trust with him. Even in my period of walking through some intellectual doubts about Christianity (see my Wednesday poesy post), I never stopped loving "the faith," and it was the evidences of that dynamic, living community of covenantal trust (along with significant help from science, philosophy, and history) that brought me back to a place of security and peace with the rational trustworthiness of the Christian message. So while it is possible to have faith without a sense of certainty (see my post on Christian agnosticism), as Dr. Tyson suggests, it's not because faith is diametrically opposed to certainty.

Dr. Tyson's main argument for holding an agnostic position, though, is a version of "the problem of evil" (he refers to a a lack of benevolence in the universe's natural order), which is the most stubbornly powerful of the classic arguments against the existence of God. I won't respond to that bit here, because I've done so elsewhere (see Theses 7-9, 10-11, and 48-49): I'll simply say that my own journey of doubt led me to a long exploration of this question, which left me with a deep appreciation for what God does in and through the groaning of creation.
Email ThisBlogThis!Share to TwitterShare to FacebookShare to Pinterest
Labels: Apologetics, Culture, Devotional Reflections, Theology
Newer Post Older Post Home