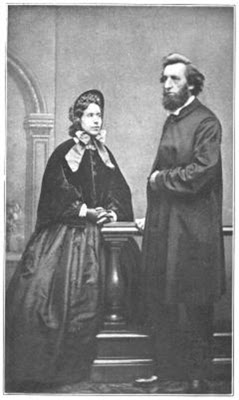 (Click here for an introduction and other installments of this series)
Lecture audio: William & Catherine Booth
(click here to listen or right-click to download)
I am not ashamed of the Gospel, because it is the power of God for the salvation of everyone who believes.
– Romans 1:16
The Son of Man came eating and drinking, and they say, “Here is a glutton and a drunkard, a friend of tax collectors and sinners.” But wisdom is proved right by her actions. – Matthew 11:19
William & Catherine Booth: Basic Facts
- William Booth (1829-1912) was the founder of The Salvation Army, together with his wife Catherine. As a child, he watched his family descend into poverty and his father into alcoholism. As a teenager, he converted to Methodism and later entered the ministry. After they were married, Catherine, who was the better theologian and the better speaker of the two, pressed him in a daring new direction. They left conventional forms of ministry in order to reach the unsaved of the lower classes of society. This led to the formation of “The Salvation Army,” of which William became the first General. They were known for street-preaching, marching bands, loud public gatherings, and humanitarian aid. 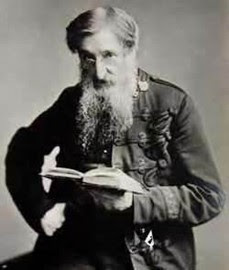 - The Booths campaigned against alcohol and against the widespread use of young teenage girls in prostitution, changing the mood of society in both areas. They also became a prominent voice for the participation of women in Christian ministries that had traditionally been the prerogative of men (preaching in particular). Of their eight children, seven became world-famous preachers. The Salvation Army, now established around the world, aids 2.5 million families each year.
- “It was raw-boned, disheveled religion, boisterous and forceful. It was designed for wife-beaters, cheats and bullies, prostitutes, boys who had stolen the family food money, unfaithful husbands, burglars, and teamsters who had been cruel to their horses.” – historian E. H. McKinley

- Booth struck on the name “Salvation Army” through an incidental conversation, borrowing the idea from the British Volunteer Movement. It gave the “recruits” a sense of pride in their new identity and solidarity with one another. It also engendered a certain courageous flair for evangelism and spiritual warfare.

- The Salvation Army, though largely now seen as a source of humanitarian aid (of which it is, in fact, one of the largest providers in the world), still functions to some degree as a church denomination. It holds worship services at its halls, but it does not spell out a detailed theology, nor does it administer the Lord’s Supper or baptism.

Josiah Strong, a contemporary observer of the Booths: “Probably during no one hundred years in the history of the world have there been saved so many thieves, gamblers, drunkards, and prostitutes as during the past quarter of a century through the heroic faith and labors of The Salvation Army.”
William Booth Quotes:
“While women weep, as they do now, I’ll fight; while little children go hungry, I’ll fight; while men go to prison, in and out, in and out, as they do now, I’ll fight—while there is a drunkard left, while there is a poor lost girl upon the streets, where there remains one dark soul without the light of God—I’ll fight! I’ll fight to the very end! “

“'Not called!' did you say? 'Not heard the call,' I think you should say. Put your ear down to the Bible, and hear him bid you go and pull sinners out of the fire of sin. Put your ear down to the burdened, agonized heart of humanity, and listen to its pitiful wail for help. Go stand by the gates of hell, and hear the damned entreat you to go to their father's house and bid their brothers and sisters, and servants and masters not to come there. And then look Christ in the face, whose mercy you have professed to obey, and tell him whether you will join heart and soul and body and circumstances in the march to publish his mercy to the world.”

“Go for souls and go for the worst!”

“Secular music, do you say, belongs to the devil? Does it? Well, if it did I would plunder him for it, for he has no right to a single note of the whole seven.… Every note, and every strain, and every harmony is divine and belongs to us.… So consecrate your voice and your instruments.… Offer them to God, and use them to make all the hearts about you merry before the Lord.” 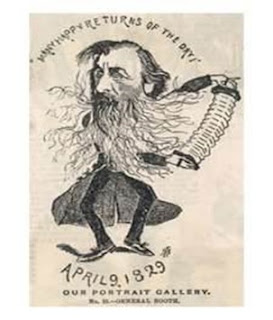 “The more I see of fashionable religion, the more I despise it.”

“I would lead Hallelujah Bands and be a darn fool in the eyes of the world to save souls.”

Responding to a man who argued, “Paul said to the Corinthians it is a shame for women to speak in the church”: “Oh yes, so he did; but in the first place this is not a church, and in the second place, I am not a Corinthian.”

“There comes a crisis, a moment when every human soul which enters the kingdom of God has to make its choice of that kingdom in preference to everything else that it holds and owns.”
Email ThisBlogThis!Share to TwitterShare to FacebookShare to Pinterest
Labels: History
Newer Post Older Post Home