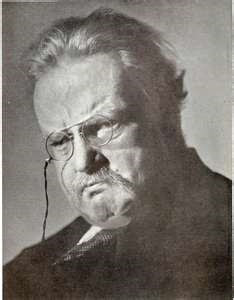 (Click here for an introduction and other installments of this series)
Lecture audio: G. K. Chesterton
(click here to listen or right-click to download)
For since the creation of the world God’s invisible qualities—his eternal power and divine nature—have been clearly seen, being understood from what has been made, so that men are without excuse. – Romans 1:20
[Jesus] called a little child and had him stand among them. And he said: “I tell you the truth, unless you change and become like little children, you will never enter the kingdom of heaven.” – Matthew 18:2-3
G. K. Chesterton: Basic Facts 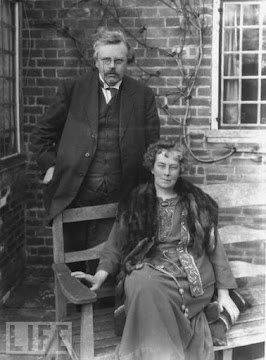 - Gilbert Keith Chesterton (1874-1936) was an English journalist and author whose work touched on the fields of theology, fiction, apologetics, philosophy, biography, poetry, politics, culture, current affairs, art, and literature. He is remembered today for his aphoristic quotes and his way of melding humor with profound Christian reflection.

- Chesterton grew up in a nominally Christian family. After being driven to near-suicidal depression by nihilistic philosophy while at art school, he slowly returned to the faith. Over the course of several decades, he moved from a vague Christian faith to high-church Anglicanism and then, finally, to Roman Catholicism.

- His best-known works today are Orthodoxy (apologetics), The Man Who Was Thursday (fiction), the Father Brown stories (detective fiction), St. Francis of Assisi (biography), and The Everlasting Man (theology/history).
Themes of Chesterton's Work:

- The Insufficiency of Modern Philosophies: Atheistic and agnostic ideas which leave no room for the spiritual dimension of life are manifestly unable to match our common-sense understanding of the way things are. They also often suffer from an overblown sense of certainty and a tragic arrogance against earlier periods of history.

- Christianity simply makes sense: In contrast to modern philosophies, faith makes sense of our basic perceptions of the world, it respects human value and encourages virtue, and it honors the worth of our traditions.

- Wonder & Joy: The fundamental attitude of the human towards God, the universe, and life in general, ought to be a childlike sense of wonder and of awestruck gratitude.
Quotes Critiquing Modern Philosophies:
“As an explanation of the world, materialism has a sort of insane simplicity….We have at once the sense of it covering everything and the sense of it leaving everything out.”

“Now it is the charge against the main deductions of the materialist that, right or wrong, they gradually destroy his humanity; I do not mean only kindness, I mean hope, courage, poetry, initiative, all that is human.”
Quotes on the Christian Faith: 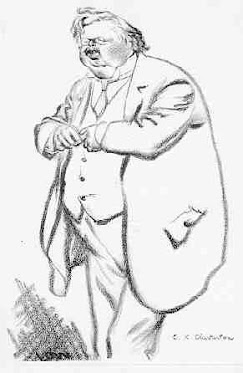 “Because children have abounding vitality, because they are in spirit fierce and free, therefore they want things repeated and unchanged. They always say, ‘Do it again,’ and the grown-up person does it again until he is nearly dead. For grown-up people are not strong enough to exult in monotony. But perhaps God is strong enough to exult in monotony. It is possible that God says every morning, ‘Do it again’ to the sun; and every evening, ‘Do it again’ to the moon. It may not be automatic necessity that makes all daisies alike; it may be that God makes every daisy separately, but has never got tired of making them. It may be that He has the eternal appetite of infancy; for we have sinned and grown old, and our Father is younger than we.”
“Man is more himself, man is more manlike, when joy is the fundamental thing in him, and grief is superficial. Melancholy should be an innocent interlude, a tender and fugitive frame of mind; praise should be the permanent pulsation of the soul. Pessimism is at best an emotional half-holiday; joy is the uproarious laughter by which all things live….Christianity satisfies suddenly and perfectly man’s ancestral instinct for being the right way up; satisfies it supremely in this; that by its creed joy becomes something gigantic and sadness something special and small.”

“The one created thing which we cannot look at is the one thing in the light of which we look at everything—Like the sun at noonday, mysticism [that is, Christian spirituality] explains everything else by the blaze of its own victorious invincibility.”

“The more I considered Christianity, the more I found that while it had established a rule and order, the chief aim of that order was to give room for good things to run wild.”
“I had always felt life first as a story: and if there is a story there is a story-teller.”

“The Christian ideal has not been tried and found wanting. It has been found difficult; and left untried.”
Additional Quotes:
“[Christ] restrained something. I say it with reverence; there was in that shattering personality a thread that must be called shyness. There was something that he hid from all men when He went up a mountain to pray. There was something that He covered constantly by abrupt silence or impetuous isolation. There was some one thing that was too great for God to show us when He walked upon our earth; and I have sometimes fancied that it was His mirth.”

“Before any modern man talks with authority about loving men, I insist (I insist with violence) that he shall always be very much pleased when his barber tries to talk to him. His barber is humanity: let him love that. If he is not pleased at this, I will not accept any substitute in the way of interest in the Congo or the future of Japan. If a man cannot love his barber whom he has seen, how shall he love the Japanese whom he has not seen?”

“The Bible tells us to love our neighbors, and also to love our enemies; probably because they are generally the same people.”

“The church is the one thing that saves a man from the degrading servitude of being a child of his own time.”

“It is only the very good who can live riotous lives.”

“Tradition means giving votes to the most obscure of all classes, our ancestors. It is the democracy of the dead. Tradition refuses to submit to the small and arrogant oligarchy of those who merely happen to be walking about.”

“To have a right to do a thing is not at all the same as to be right in doing it.”

“Fallacies do not cease to be fallacies because they become fashions.”

“Without education, we are in a horrible and deadly danger of taking educated people seriously.”

“I believe what really happens in history is this: the old man is always wrong; and the young people are always wrong about what is wrong with him. The practical form it takes is this: that, while the old man may stand by some stupid custom, the young man always attacks it with some theory that turns out to be equally stupid.”

“The great poets have been strangely silent on the subject of cheese.”

“Once I planned to write a book of poems entirely about the things in my pockets. But I found it was too long, and the age of the great epics is past.”
Posted by Matthew Burden at 5:21 AM