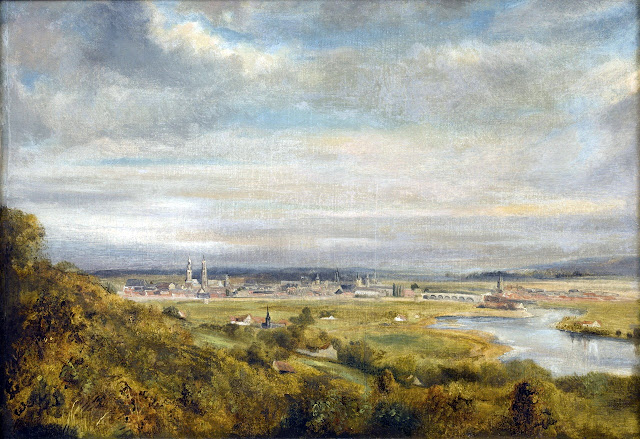 For much of the spring and early summer, we had exceptionally dry weather (at least by Maine standards). There were regular notices of fire hazards, and warnings of moderate drought conditions that might even dry up wells. It’s not often that we have a lack of water here in Maine, between our melting snowbanks, our annual “mud season,” and the profusion of lakes and rivers around us. But this year has proved a reminder of just how precious and important our water is to us. It nourishes, brings life, purifies and cleanses, and without it the world becomes parched, withered, and life is tremendously difficult. Another place I lived and worked for awhile was in the deserts of North Africa. The life-giving power of water was dramatically evident there: it was only in the narrow strips of land beside rivers that you could find any greenery at all; everything else was lifeless sand, rock, and wind-whipped dust storms.

For Christians, we are promised access to “the water of life,” “living water,” such that we will never thirst again (John 4:10-14; 7:37; Rev. 21:6)—the gift of God’s love through Christ Jesus and the presence of the Holy Spirit, in which the deepest longings of our soul are forever satisfied. But the Bible doesn’t just stop there, with a picture of us receiving this magnificent gift; it also teaches that we will become vessels by which God pours his blessings into the lives of others. In John 7:38, Jesus says, “Whoever believes in me, as Scripture has said, rivers of living water will flow from within them.” It’s clear from just a glance at that verse that it shows a beautiful image of Christians being fashioned into fountainheads of God’s life-giving grace. In the immediately following verse, John tells us that this is a reference to the work of the Holy Spirit, pouring out through Christians’ hearts. But the metaphor Jesus is using in this verse also has a deep and meaningful biblical tradition behind it: the image of “rivers of living water” would have called to mind the intertwined Old Testament stories of the Garden of Eden and the Temple.

In Genesis 2, the Garden of Eden is described as being the source for the major rivers of the known world, and its waters went out to bring life to all the surrounding territory. This image of life-giving rivers at the center of creation is picked up again at the very end of the Bible, with the vision of God’s New Creation (the union of the new heavens and new earth) in Rev. 21-22, where we see the river of life at the center, with the trees of Eden growing on its banks. When Jesus said that rivers of living water would flow from his followers, one of the meanings wrapped up in those words is that God’s New Creation is beginning in his people’s hearts, and that its blessing will flow out from them until the day when he restores all things: our hearts as the new Eden, where God dwells with us.

It’s also a Temple image—you may not immediately associate Temple imagery with rivers, but it’s a prominent aspect of the prophet Ezekiel’s vision: a river flowing out from the Temple and watering the nations (Ezek. 47). The way Jesus phrases his remark also points toward a Temple-oriented meaning: “living water” was the technical description used in Israel for the kind of water needed for ritual purifications. “Living water” could refer to rivers, streams, or any facility in which the water moves through without stagnating (we would probably say “running water”). This kind of water was required so that you could become ritually pure before you worshiped God in the Temple. And that is precisely the kind of water that Jesus says will flow from his followers’ hearts: water that purifies, that draws others toward holiness and closeness with God. As Christians, one of our callings is to be the channel through which God pours his life-giving love and grace, his invitation to the adventure of pursuing him in holiness and truth. Let’s let him use us, like a nourishing river, to bless our world with beauty, love, and the fullness of life in Christ.