Heroes of the Faith: The Waldensians 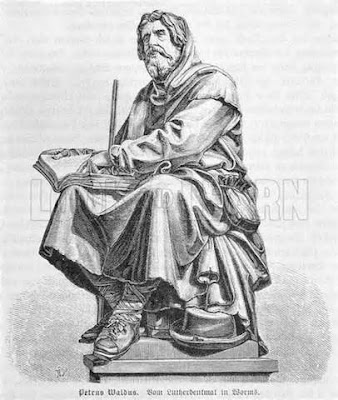 After this the Lord appointed seventy-two others and sent them two by two ahead of him to every town and place where he was about to go. He told them, “The harvest is plentiful, but the workers are few. Ask the Lord of the harvest, therefore, to send out workers into his harvest field. Go! I am sending you out like lambs among wolves. Do not take a purse or bag or sandals.”  – Luke 10:1-4a

Do not be afraid, little flock, for your Father has been pleased to give you the kingdom. Sell your possessions and give to the poor.”  – Luke 12:32-33

- Waldo of Lyons (1140-1218), later to be known as “Peter Waldo,” was a wealthy merchant living in southern France during the High Middle Ages. He was a faithful Catholic, but at some point his life was changed radically by a personal faith-encounter with Christ. He sold all his possessions and began living a life of poverty, started preaching publicly about his transformative spiritual experience, and promoted the idea of translating the Bible into the local dialect.

- Waldo’s followers, the Waldensians, created a vibrant network of small-group fellowships, supported by their own ministers. Despite being persecuted and discriminated against for centuries, the Waldensians persisted in their faith, eventually breaking with the Roman Catholic church during the 16th-century Reformation.

Timeline of the Waldensians:

1160s – Waldo undergoes his conversion and devotes himself to living the Christian life according to the New Testament alone, and especially the Sermon on the Mount (Matt. 5-7)

1170s - Although some of Waldo’s ideas originally gain support from the Pope, the local bishop eventually opposes Waldo because of his preaching (in Catholicism, only priests had authority to preach). He is expelled from Lyons.

1200s – The followers of Waldo, known in this era as “The Poor,” expand their evangelistic activity. Their leaders, ministers known as barba (“uncles”) travel out in twos to preach and encourage laypeople to read the Bible for themselves. Even so, they still faithfully attend their Catholic churches in addition to these activities. The Waldensians soon have groups of believers across northern Italy, but they are declared heretics and come under fierce persecution. In 1211, more than 80 Waldensians are burned to death in Strasbourg. The new churches only survive by retreating into remote valleys in the Alps.

1300s & 1400s – Despite persecution (including an extermination order signed by the Pope in 1487), the Waldensians continue their missionary activities, expanding into the Danube River valley. There many of them join with the followers of Jan Hus, another early reformer.

1526-1532 – With the Protestant Reformation now in full force, the Waldensians make contacts with some of the Swiss reformers. Both groups share a deep focus on studying the Bible and living out its principles, and both reject certain Catholic doctrines like purgatory and transubstantiation. In this period, the Waldensians are even able to go where the Protestants cannot, carrying the Bible-centered Gospel message deep into heavily-Catholic Italy itself.

1555 – In a momentous step, the Waldensians choose to follow the example of the Protestants and separate completely from the Roman Catholic church. They build their first church building and begin holding independent services.

1560-1561 – In northwest Italy (the heartland of the Waldensians), the Waldensian communities decide to stay put rather than emigrate to Protestant areas. The Duke of Savoy decides to crush them militarily, and they resist in heroic fashion, winning against incredible odds. So the Duke is forced to grant them the right to practice their own faith as a minority (the first such decision of its kind in European history). Unfortunately, at the very same time, a religious purge was being carried out against the Waldensians in southern Italy—more than 6000 were killed or sold as slaves.

1655 – After a century of living in their Alpine villages under the constant burden of discrimination, tragedy breaks out again. When the Waldensians refuse an unfair court order to give up all their possessions gained in the past century, the armies of Turin and France march in and carry out the infamous “Piedmont Easter Massacre,” killing 1700 Waldensians, and torturing, raping, and looting many others. The news of this event sends shockwaves rippling through Europe. But once again, the Waldensians regroup and come back, organizing a guerilla military resistance that ultimately wins back their homeland.

1685-1686 – With the rise of Louis XIV’s Catholic empire in France, the Waldensians face their greatest challenge yet. They are targeted in the “Wars of Religion,” and are faced with the choice between execution, emigration, or conversion to Catholicism. Many decided to emigrate to Protestant countries (and some were forced to march out through the bitter Alpine winter), but a few choose to resist, and despite their heroic measures, another great massacre ensues.

1689 – Aided by their Protestant allies in northern Europe, a group of 900 Waldensians covertly make the journey through the mountain passes, 130 miles through enemy territory, back to their own homeland. Despite heavy losses, they make it through, and reclaim their homes in the midst of the enemy. This is known as the “Glorious Return,” and although they still felt persecution, they have never again been forced away.

1700s-present day – The Waldensians are still a vibrant church community, serving as one of the most active Protestant voices in Italy. 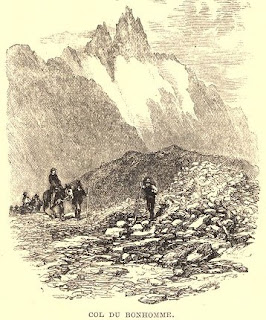 Avenge O Lord thy slaughtered Saints, whose bones
Lie scatter’d on the Alpine mountains cold,
Ev’n them who kept thy truth so pure of old
When all our Fathers worship’t Stocks and Stones
Forget not: in thy book record their groans
Who were thy sheep and in their ancient fold
Slayn by the bloody Piedmontese that roll’d
Mother with infant down the rocks. Their moans
The vales redoubl’d to the hills, and they
To heav’n. Their martyred blood and ashes sow
O’er all th’ Italian fields where still doth sway
The triple tyrant: that from these may grow
A hundred-fold, who having learnt thy way
Early may fly the Babylonian woe.