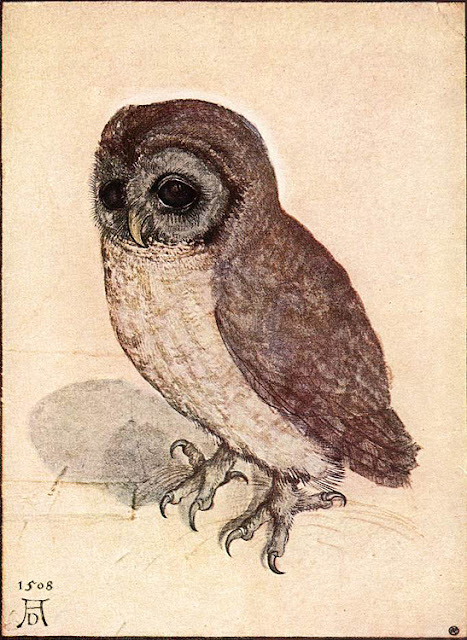 Owls have fascinated people for millennia. Their nocturnal habits, their bright eyes and round faces, and the air of awareness they bear in their demeanor: all these things have entranced, frightened, and compelled people throughout the ages. The enigmatic owl's unique habits and aspect make it notable among birds, and it has long been held as a Christian symbol (as well as a common symbol for many other cultures and religious traditions). But before we get to that, here's a few facts about owls you might not know:

- Owls' heads can rotate 180 degrees (and in some species, nearly 270), meaning that they can stare straight behind them (and further if necessary) without turning their bodies at all. Their eyes are also uniquely powerful, especially for seeing in the dark--their vision exceeds that of humans by several orders of magnitude. 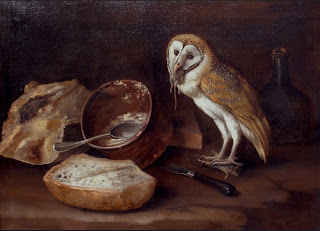 - Further, many owls have extraordinary senses of hearing, This is one of the reasons why owls' faces are shaped the way they are: the contour feathers on their faces are arranged in a disc in order to funnel sound toward their ears. Further, their ear canals are arranged asymmetrically, allowing them to hear in 3D--rather than simply hearing noises the way that you or I do, owls can hear an entire soundscape, pinpointed to specific locations around them. This is a great advantage in hunting. Northerly species can accurately attack prey that is burrowing down, completely out of sight, under a layer of snow. And Barn Owls can capture their prey in complete darkness if necessary, using their hearing alone to pinpoint the location of their prey.

- Owls are just about the quietest fliers in the world. Whereas any other species of bird, especially in the act of taking off, often makes a terrible racket of wing-flaps, owls' feathers are designed in such a way that they can take off, with vigorous flapping of their wings, all without making a sound.

- Although owls are usually thought to give a stereotypical vocalization of "hoo, hoo, hoo" (or, in England, "to-whit to-whoo"), they actually make a broad range of calls, most of which sound alarmingly strange. Among North American owls, we have one or two that sound like conventional owls (such as the Great Horned Owl), but the others speak in whinnies, screeches, and screams (Barn Owls, Screech Owls), or like cats under duress (Short-Eared Owl, Long-Eared Owl), or like saw-blades being sharpened (Saw-whet Owl), or like construction equipment backing up (Saw-whet Owl again, Northern Pygmy Owl). 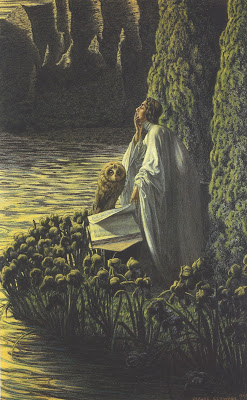 - A group of owls is called a "parliament."

Owls are mentioned frequently in the Bible, particularly in the Old Testament books of wisdom and prophecy. In almost every occurrence in those books, they appear as a symbol of desolation and mourning. They are pictured as haunting the ruined and abandoned places deep in the desert. In this, they symbolize the condition of the people of Israel as they suffer the consequences of their sin.

In much of the art of later Christian civilization, however, the owl's symbolism borrows more from the Greek association with wisdom than from the biblical allusions to mourning and desolation. This wisdom-connection was more often a symbol of popular culture and folklore than it was of theological art, but it persisted nonetheless, and owls would later appear as symbols of wisdom and careful deliberation in explicitly Christian works, like C. S. Lewis' Chronicles of Narnia. 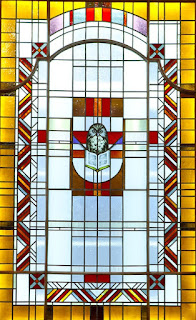 Noted Bible teacher John Stott also uses owls to make a comparison to the Christian life. Just as owls are able to rotate their heads so they can easily see forward or backward, so too Christians are called to be people who face both ways: "All the time we should be looking back to the past with gratitude and on to the future with expectation." Our perspective is rooted to what Christ has done for us in the past (the cross and empty tomb, and the miracle of our salvation), but at the same time stretches out toward the future (the certain hope of Christ's full and final victory, and the completion of our journey of faith in eternal union with God).

The mysterious, enigmatic owl: in its mystery, it is a fitting symbol for the paradoxes of Christian belief--of mourning and desolation, which in some mysterious way connects us to the salvific, conquering desolations of Christ's passion; of the holy wisdom of God, the divine, eternal counsel of the Maker of all, in which we frail mortals are enabled to walk; and of the already-but-not-yet character of our journey of faith, anchored in both the past and the future. Let the wise old owl be your teacher, pointing you toward thanksgiving for the manifold wisdom of God.
Email ThisBlogThis!Share to TwitterShare to FacebookShare to Pinterest
Labels: "Ornitheology"
Newer Post Older Post Home