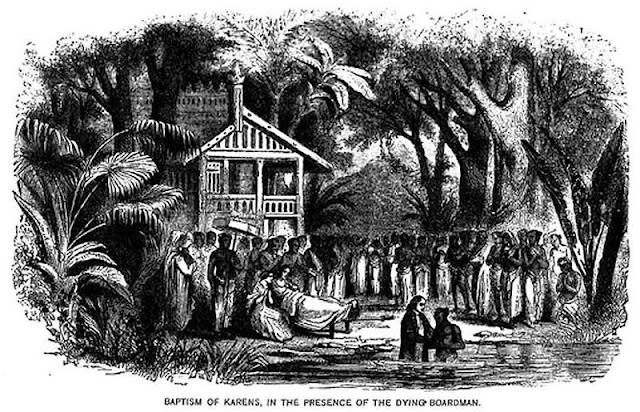 A New Season for Adoniram


They re-established their mission base at Amherst, the new center of British operations in the portions of southern Burma which they had retained in the recent treaty. Adoniram agreed to split his time of missionary labors to offer service to the British embassy there, largely because they offered to work for freedom of religion in Burma. However, while he was away on his ambassadorial duties, he received word in the fall of 1826 that Ann, who had struggled with bouts of fever throughout the year, had died, and that little Maria was also ill. Around the same time, Dr. Price and his wife also passed away, from cholera and the lingering effects of those long months in the Burmese death-prisons.


Back at Amherst, Adoniram mourned the loss of his wife and set about returning to his mission work. He held his first Burmese Christian service in more than two years, but of course there were only a very few in attendance—survivors of the war, who had followed them from Rangoon to their new mission at Amherst. Shortly after his return, in April of 1827, little Maria died, and every last member of the family he had built with Ann was gone. Adoniram, prone to bouts of depression by temperament, which were worsened by the string of tragedies he had suffered, threw himself back into translation work of the Old Testament. Though he pressed on mechanically with his duties, he was driven by his tormented self-doubts to worry that his motives for embarking on the Burma mission had not been altogether good, and had redounded with far too much of his own earthly pride. Sunk deep into a desire for complete self-effacement, he embraced a self-denying, contemplative asceticism, built himself a hermitage in the jungle, and retreated almost completely from missionary life.


However, around the same time as Maria’s death, a new missionary couple, who would figure large in the story of the Judson legacy, arrived in Amherst: George and Sarah Boardman. After a few months in Moulmein (the growing Burmese city near Amherst), the Boardmans took off for Tavoy, looking to spread the Gospel in the mountainous jungles of lower Burma. They took with them one of Adoniram’s most promising converts from Amherst: Ko Tha Byu—not a native Bamar (Burman), but rather a member of the ethnic Karen tribe. The Karen mission, begun by Adoniram’s discipling of Ko Tha Byu in the moment of his darkest doubts, and later pressed forward by the Boardmans’ labors, would become the greatest success story of the Burmese mission: the Karen people, unlike the ethnic Bamar who constituted Adoniram’s main labors, would respond in an overwhelming, en masse movement to Christianity.


By the beginning of 1830, Adoniram was moving on from his isolated retreat in the jungle, and re-entered the work of the mission with a new vigor, at a time when missionary recruits were steadily pouring in. There was also a new feeling of openness among the Burmans, and everywhere Adoniram went, including a trip up the Irrawaddy, he was asked for tracts about Christianity. This held true nearly all the way up to Ava, but there he found the old state still very much in force: suspicion and hostility toward all foreigners. On the return trip, stopping in Rangoon, he found that his co-missionary Wade had given up the re-established mission there once again, and the work in their old home city was now almost completely vanished. So Adoniram took up translation work again, and pressed on. With all the new additions to the mission team, overall progress was picking up pace: he and Ann had succeeded in baptizing only eighteen converts in nine years; but in the years since the war, that number had gone up to three hundred seventy-three (most of them from minority groups in the British-controlled areas).  The Bamar people, living in the Irrawaddy River valley between Ava and Rangoon, were still extremely hesitant to convert, despite their interest in Adoniram’s tracts.


It was now 1831, and George Boardman, after four years of riotous missionary success among the Karens, had passed away from tuberculosis. Adoniram split his time between his own missionary journeys into the hill country of the Karens and a push to complete his translation of the Old Testament. By the early months of 1834, after a long season of intense and careful translation work, going directly from ancient Greek and Hebrew into Burmese, Adoniram Judson completed his translation of the Burmese Bible—a task that he was the only person on earth equipped to perform, and which was of such a high quality that it continues to be used (with only minor revisions) in the churches of Burma to this day.


With that work completed, Adoniram suddenly felt free to move on into the next stage of his life. He proposed to Sarah Boardman, the widow of George Boardman, who had stayed on in Burma to carry on the work they had begun with the Karens. On April 10, 1834, Adoniram and Sarah were married in Tavoy.


Adoniram and Sarah’s early years together were taken up with linguistic work. By this point, Adoniram had largely moved on from his direct missionary labors of trying to build a self-sustaining Christian movement among the Bamar people who (although a congregation had developed around him at Moulmein) continued to be resistant to the Gospel. Rangoon, the center of his early ministry life, remained closed to missionary activity, and even his congregation at Moulmein began to decline. He came to believe that his work on the Burmese Bible was worth an entire life’s labor, and he set about perfecting it, while Sarah focused on learning several of the other local tribal languages. At the end of 1835, with his revision of the Old Testament complete and having just baptized the one hundredth native member of the Burmese church (one of the rare bright spots in the Bamar ministry), he was able to match this season of rejoicing with the welcome of a new child into his family: Abigail Ann Judson. Two years later, his revision of the New Testament was complete, and their little family continued to grow (they would end up having eight children together, six of whom survived, in addition to the three Sarah had borne to George Boardman).


After the Burmese Bible was finished, Adoniram tried to return to missionary preaching, to press forward his great goal of sparking a movement toward Christ among the majority Bamar people. But a chronic medical condition was affecting his throat and preventing him from public speaking, so he gave himself over to a project that would prove of service to the many missionaries yet to come: a Burmese dictionary. Adoniram’s family was once again struck by illness: Sarah suffered through serious bouts of fever, as did several of the children. Eventually the decision was made that all of them should make a return voyage to America, as Ann had done so many years before, to regain their strength in a healthier clime before returning to the work in Burma. Sarah passed away during the voyage, so Adoniram continued on for America with his young children, feeling very much alone once again.


For a few brief months in 1845 he toured the northeastern United States, finding, much to his surprise, that he was a celebrity everywhere he went. The letters and memoirs of his wife Ann, along with scraps of news from many other members of his mission team, had been published, read voraciously, and expanded into multiple editions and printings. His presence in America for those few months helped to confirm the direction and excitement of the Baptist missionary enterprise. 1845 happened to be the year that the Southern Baptist Convention split off from the Northern Baptists, leaving those in the north with much of the debt of the mission enterprise. Adoniram was at a convention meeting where the churches were on the verge of scaling back their missionary work because of this occurrence, but Adoniram spoke up, and his voice carried the day: even in the face of immense financial difficulties, the Baptist missionary enterprise of the northern churches would be expanded, not scaled down. It was also in America that he met and married his third wife, the Christian writer Emily Chubbuck (who had attained significant popularity writing under the pen name of Fanny Forester).


Bringing his new wife back to Burma, Adoniram decided to leave Moulmein behind. The mission team there had swelled to more than thirty, while there was not even one missionary serving in the Burmese-controlled areas upriver. So in 1847 he decided to settle back in Rangoon. The officials there were still deeply suspicious of foreign influence, and the people still largely uninterested in the Gospel (Adoniram described it as a “land of darkness and intolerance”), but there was enough high-level interest in his dictionary project to make it feasible for his family to live there. Sadly, it was not to be: Adoniram was struck with a debilitating disease, and cuts to the mission budget prevented them from any missionary tours upriver. They returned to Moulmein after just seven months, with little to show for their attempt at ministry in the Bamar heartland. But the removal to Moulmein did not improve Adoniram’s health: he continued to decline steadily until, on April 12, 1850, he attained his rest.
Posted by Matthew Burden at 5:00 AM