The Christian Emperor and the Church's Counter-Revolution 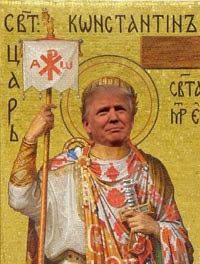 Imagine this political scene for a moment: the Christian portion of the population has just come through a period where some of them have felt marginalized, even oppressed in outright ways. Suddenly, a new leader emerges who, despite a frankly unchristian lifestyle in his earlier years, now claims to represent the interests of Christians and pledges to carry out their hopes for national life at the highest level. Some Christians are excited about his ascendancy, because it heralds a new day of authority and influence for their faith. Other Christians are very wary of this new leader, who see deeply troubling signs in his character and deportment, and who suspect that his ascendancy will do more to harm the cause of Christ than to help it.

OK, clearly by now you should have guessed the man I'm talking about: that's right, it's Emperor Constantine. After a series of bloody civil wars in the early years of the 4th century AD, he defeated his co-Caesars and became the undisputed ruler of the Roman Empire. And in doing so, he marked a radical change for Christians in the Roman Empire--he was the first emperor to favor them outright, and granted them religious freedom after a long period of murderous persecution under the previous ruler. More than that, he began to claim--only hintingly at first, but later explicitly--that he himself was a Christian. He took a direct interest in the affairs of the church, helping Christian leaders organize the first great ecumenical council (Nicaea, 325 AD), which condemned the dangerous Arian heresy and reaffirmed the foundations of true Christian theology. He awarded massive benefices to parishes across the Empire, resulting in the construction of many impressive new church buildings. For all these things, he was embraced as an answer to prayer by many Christians in the Roman world. Even today, this legacy continues to earn him recognition as a canonized saint in several branches of Christianity. 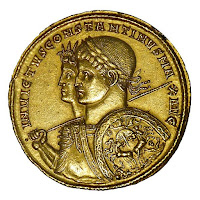 But there were issues with Constantine that continued to trouble many believers. His personal life and conduct, as one might expect from an imperial ruler in the ancient world, was less than compellingly Christian. At one point, well after his personal support of Christianity was long established, he went so far as to order the murder of his wife and son. He was also very slow in disavowing his earlier pagan devotion. He continued to use the imperial title for the head of the pagan religious priesthood, pontifex maximus. He also continued to use the imagery and rhetoric of one particular god, Sol Invictus, as a personal identification marker.

For many Christians, though, it wasn't even Constantine himself that made the problem truly serious. It was the way that Christianity was changing because of Constantine's influence. A lot of believers began to look around at the church they had grown up in, the church they had loved and suffered with through long years of persecution and mission, and they felt like they didn't recognize it anymore. All of the sudden, churches were no longer places marked by the humble gratitude of simplicity, but by opulence and wealth. The imperial state was associating itself with Christianity, leading to some worrying syncretistic ties between church and state. Further, the outside world was looking hard at these developments, and was coming to accept Constantine's association that to be Roman was to be Christian. As a result, the Christians in Rome's enemy empire, Persia, suffered a brutal persecution several times worse than what Roman Christians themselves had undergone. But the biggest concern was about the nature of true devotion. What did it even mean to be a Christian anymore, when suddenly Christianity was at the center of power, and churches were being flooded by new converts that had no real intention to walk the way of the cross, but just to bask in the glow of imperial favor and social respectability? It was too hard now to discern true Christians from false ones, bemoaned the church father Basil--much harder than it had been in "the good old days" when the church was being violently persecuted. 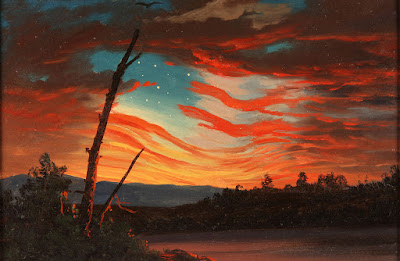 This situation strikes me as somewhat akin to what's happening right now in America, in the wake of our presidential election. A new leader, ostensibly Christian but marked by a rather obvious lack of Christian character, has been swept to power. And while there is some hope among many Christians that his influence will roll back a bit of social policy away from what was perceived as an anti-Christian direction, and that his Supreme Court picks might be able to accomplish one of the great hopes of many American Christians--the curtailing of our ongoing Herodian crime, the massacre of the holy innocents--still, despite all those hopes, there is a great deal of wariness among many Christians about this leader and what his rule will mean for Christianity in this country. What will happen, for instance, to the very biblical and Christian value of being faithful stewards of God's natural creation? Or of the love of our neighbors (including our neighboring countries)? Or, quite simply, of the Christian virtues of kindness and gentleness? A great many believers have stumbled across Paul's warning in 2 Timothy 3:1-5 this year, and found it hard not to think of our new president-elect: "...In the last days, people will be lovers of themselves, lovers of money, boastful, proud, abusive...ungrateful, unholy, without love, unforgiving, slanderous, without self-control...rash, conceited, lovers of pleasure rather than lovers of God--having a form of godliness but denying its power. Have nothing to do with such people."

So what should the Christian church do in such a place? I would suggest that, whatever your views of Mr. Trump may be, it is not an appropriate response to simply sit back and hope that he'll muddle through to enough right choices that his presidency will balance out toward the good. Now, to be clear, I am certainly hoping for that and praying for that. I'm praying for more, in fact--that he, too, like Constantine, might, in his own stumbling way, so encounter the transforming grace of Jesus Christ that he might one day be looked back on as a saint. That certainly does not appear to be where he is right now, but God can change any willing heart, so that's what I'm praying for. 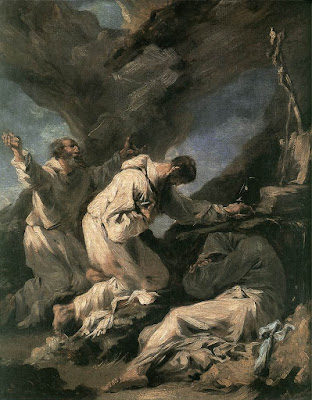 But there's more that we can do, and we can draw an instructive lesson from the church in Constantine's day. In the midst of all those split opinions about Constantine and his legacy, a massive counter-revolution of true devotion took shape. When Christians felt that they could not be completely true to the Gospel in the form that their contemporary church was expressing it, they didn't just resign themselves to a halfhearted, milquetoast Christianity. They became radical followers of Christ, and did so by raising up an institution that would become one of the main arms of true Christian devotion for the next thousand years: monasticism. There had been ascetic hermits and monks before the reign of Constantine, it's true, but it was after his political revolution that the religious revolution took shape in all its power. It was very much a Christian backlash against the less-than-Christian developments that had followed from Constantine's reign. In a sense, then, it was a Christian protest movement that chose to look in a different direction than to their "Christian" emperor. Monasticism became a primary movement in the church, marked by men and women who had made the decision to devote every single aspect of their lives to living out the Gospel in its entirety. It is hard to overstate the positive impact of monasticism on the story of Christianity--throughout much of the medieval period, it was the one great institution of the faith that kept the church rooted, at least in part, to the values of the New Testament. In the end, it reformed and preserved true Christian faith far, far more effectively than any of the merely political reforms of emperors like Constantine.

We stand today at a similar opportunity. Do we simply sit back and see what this ostensibly-Christian loose cannon is able to accomplish for the sake of the faith? Or do we pray for him while, at the same time, devoting ourselves anew to truly being the Christians that we are called to be? I'm not sure if our response today will be the exact same one as back then (although it might be--see my series of essays on Neo-Monasticism under the "Full Series" heading on the sidebar). But whatever form the response takes, I want to encourage my Christian readers that we stand at a moment of opportunity here, to pursue God with such passion and resolve that the love of Christ becomes a visible, impactful reality in our local communities. Go forth and be the Basils and Benedicts of our generation (both famous monastic founders), because they achieved lasting triumphs for the Kingdom of God where Constantine could merely tweak the temporary policies of one isolated empire. God can do far, far more through one true Christian, thoroughly devoted to him, than he can do through any mere emperor or president.

(Picture credits: Icon/Photo, top--Mosaic of Saint Constantine from Saint Isaac's Cathedral, St. Petersburg, Russia, with a superimposed photograph of Donald Trump's face, licensed by "Transition 2017" under the Creative Commons Attribution 4.0 International license; use of this work does not imply that the author or licensor of this photograph agrees with the content of this post; Coin, left - Double bust of Constantine and Sol Invictus, 313 AD; Painting, right - "Our Banner in the Sky," by Frederic Edwin Church, 1861; Painting, left - "Praying Monks," by Alessandro Magnasco, early 18th cent.)
Email ThisBlogThis!Share to TwitterShare to FacebookShare to Pinterest
Labels: Church Life, Culture, History
Newer Post Older Post Home