Short Poems from My Obscure Marginalia

The poetic muse was ignoring me this week as I tried to come up with a bit of poesy for this post. But then I remembered that when I was in college and seminary, I used to scribble down short poems in the margins of my notebooks when three-hour lectures began to lose their power to hold complete attention. (My apologies to all my professors for being a less than fully attentive student at times.) To make the exercise more interesting, I would write these marginalia in the orthography of another language--usually Arabic or Hebrew. I wasn't quite good enough at these languages to write poetry in Arabic or Hebrew themselves, but I would borrow their alphabetic script to write coded English messages. (This is, by the way, one of the many fun possibilities for inventive pastimes that arise from learning languages with non-Roman alphabets.) Some such notes were, as you might imagine, just time-killers. Here's one in modified Arabic lettering that appears to be a quote from the sci-fi TV show "Babylon 5."

"If you fight, fight without fear; if you love, love without reservation."

Occasionally, I would also write out snippets of prayers and devotional thoughts. Here's a bit of marginalia in a modified Hebrew script: "When will I be wholly Thine?"

But sometimes I would have time, in a long enough and boring enough lecture, to pen out an actual poem of a few lines' length. Here's one I wrote in a modified Hebrew script: 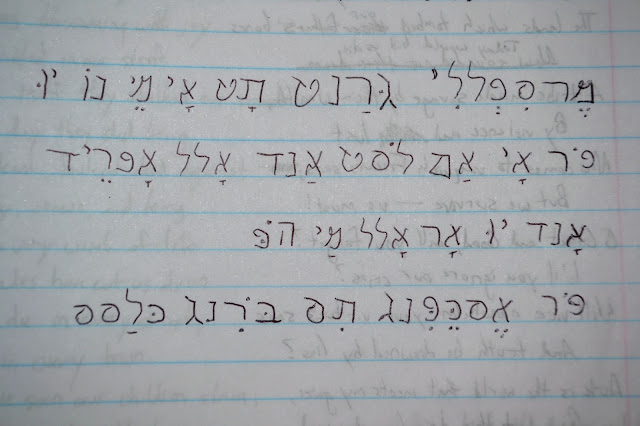 The first three lines are a good start to a marvelous little poem-prayer:


"Mercifully grant that I may know You,
For I am lost and all afraid,
And You are all my hope..."
Unfortunately, it appears that my rather dull wit won out over my artistic and devotional instincts, because the final line reads:

"...for escaping this boring class."

I hope you've enjoyed this taste of my obscure marginalia. Feel free to try some yourself if you like. Not only is it a pretentiously intellectual exercise that appeals to people like me, who find humor in gentle absurdities, it's also a long and venerable tradition, passed down from many generations of bored scribes in the ancient and medieval periods. Further, it's worth saying that it engages the mind in a far more interesting way than by playing stupefying smartphone games. And, if you're the sort of person who keeps journals or diaries, this is a good way to add the zest of a little mystery to them, for the benefit of whatever poor descendant of yours tries to read them.
Email ThisBlogThis!Share to TwitterShare to FacebookShare to Pinterest
Labels: Poems, Recollections
Newer Post Older Post Home