What Do Those Funny Letters Mean? A Guide to Symbolic Abbreviations in Church

I was recently asked by a woman in my Baptist church, "What do those letters on the cross mean?" At first I wasn't quite sure what she was referring to, until she gestured to the brass cross that sits on our communion table. Sure enough, cryptically engraved in the center of the cross were three mysterious letters: IHS. Thankfully, I happened to know the answer to her question, mostly due to Greek classes in seminary and a penchant for liturgical art. But I suspect that a good many of my fellow evangelicals don't know, despite the fact that this and other symbolic abbreviations regularly appear on crosses and in artwork, even in their own churches. So here I offer this helpful guide for any weird letterings you might find around your church. If nothing else, it'll give you a few classic Christian options for your doodling while you're pretending to take sermon notes. 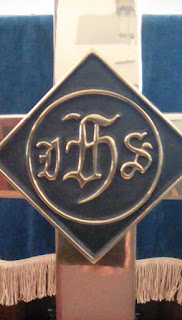 IHS: These three letters are an abbreviation of the name of Jesus. They may look like our English letters "I," "H," and "S," but in fact they are not. They are the Greek letters Iota, Eta, and Sigma. (Iota and Sigma are rough equivalents to our "I" and "S," but Eta is rather like an "E," not an "H"). These happen to be the first three letters of the name of Jesus in Greek, Iesous (or, more properly, IHΣΟΥΣ or Ιησους), which is what the symbol is meant to represent. There are also a few false backronyms floating around about this one, but they are later interpolations. Some medievals, who knew Latin but not Greek, thought it stood for Iesus Hominum Salvator ("Jesus, Savior of Mankind"), and some English backronyms include "In His Service" or "I Have Suffered." But it's actually from the Greek, and because it's a Greek abbreviation, you can find other variants around, too, such as IHC (because there were two forms for sigmas in Greek, one of which looks like our "s," the other like our "c"), JHS, or IHΣ. Any way you write it, the meaning is the same: Jesus.

INRI: This is another one that I've often seen on crosses, even in evangelical churches. This set of letters is an acronym that comes to us from Latin. It's the first letters of the words that make up the famous message posted above Christ on the cross: "Jesus of Nazareth, King of the Jews." In Latin, this is Iēsus Nazarēnus, Rēx Iūdaeōrum. So if you take the first letter of each word, it's INRI. Occasionally, you might see the Greek variant pop up, which would be INBI (the difference being that the word for "king" is Rex in Latin but Basileus in Greek). 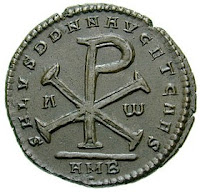 Chi-Rho Monogram: This symbol, which looks to us like a "P" stuck into the middle of an "X," is in fact another Christogram, that is, an abbreviation of the name of Jesus Christ. It signifies the first two letters of the name "Christ" in Greek, Christos (or, more accurately, Χριστος). As you can see, the first Greek letter is Chi (which looks like our "X" and is written out in English by "Ch"), followed by Rho (which looks like our "P" but is roughly equivalent to our "R"). Thus, these two letters begin the name "Christ," and, when written together, make a handsome little abbreviation for it. 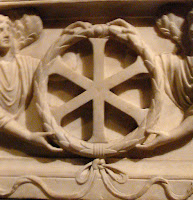 IX Monogram: Similar to the Chi-Rho, this ancient symbol of the name of Jesus is also two letters jammed together, though it looks more like the spokes of a wheel to us. In fact, it's the Greek letter Iota (I) stuck into the letter Chi (X). Again, these are, respectively, the first letters of the Greek names for Jesus and Christ. A similar symbol is the IH monogram (the I bisecting the H), which stands for the first two letters of "Jesus."

Ichthys/Ichthus: The Ichthys is a very familiar symbol in evangelical Christianity (the profile of a fish drawn with two arcs that cross at the tail). It's often affixed to car bumpers and sometimes even devouring misbegotten Darwinian creations there. Occasionally, you'll even see the Greek lettering inside that familiar outline of a fish: ΙΧΘΥΣ, or, in lowercase, ιχθυς. These five letters constitute the noun "fish" in Greek, and thus the pictorial symbol. But it has also, since ancient times, been understood and used by Christians as an acrostic for the name and title of Christ: "Jesus Christ, God's Son, Savior" (Ίησοῦς Χριστός, Θεοῦ Υἱός, Σωτήρ). 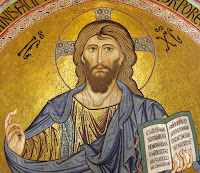 IC XC: Just when you think the early church couldn't think up another way to abbreviate the name of Jesus, here's another one for you. This one you won't often see in evangelical churches, but if you're ever looking at an Orthodox icon, you'll likely see it there, often with the two parts on either side of Jesus' head. Remembering that "C" is an alternate form for the Greek letter sigma (equivalent to our "S"), you'll find that these are the first and last letters of "Jesus," and the first and last letters of "Christ": Ιησους Χριστος. Occasionally, you'll see this partnered with another Greek word, NIKA, giving a message that reads: "Jesus Christ conquers." 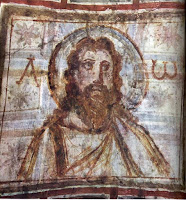 AΩ (or Aω or αω): This is the symbol for "Alpha and Omega," the first and last letters of the Greek alphabet, and one of the biblical names for God (Rev. 1:8). Many Christians can recognize the capitalized variant, but I include it in this list because the lowercase omega, which looks like a curvy "W" to us, sometimes appears in symbolic abbreviations, and may be harder for many English-speakers to recognize. 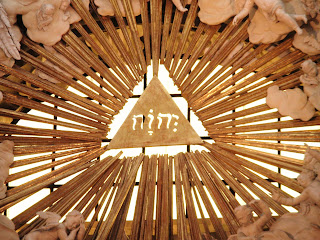 So there you go. And, as a bonus, I'll even let you in on the secret of why "Jehovah" is not actually the best rendering for the name of God. It's derived from the tetragrammaton, the Hebrew 4-letter name of God as revealed to Moses: YHWH. Since the vowels for this word were never written down, or sometimes the wrong vowels were deliberately written in (Jewish scribes wanted to preserve its sanctity), experts have tried various ways of reconstructing it. Many modern Bible scholars will render it as "Yahweh." But old medieval Bible scholars tried their hand at it, too, and since the "Y" sound in Latin is shown with the letter "J," and the "W" sound interchangeable for "V," we ended up with JHVH. Jam some vowels in there, and you get "Jehovah"--the Anglicized Latinized version of the Hebrew name for God, and almost certainly not the way Moses heard it on the mountain.
Email ThisBlogThis!Share to TwitterShare to FacebookShare to Pinterest
Labels: Church Life
Newer Post Older Post Home