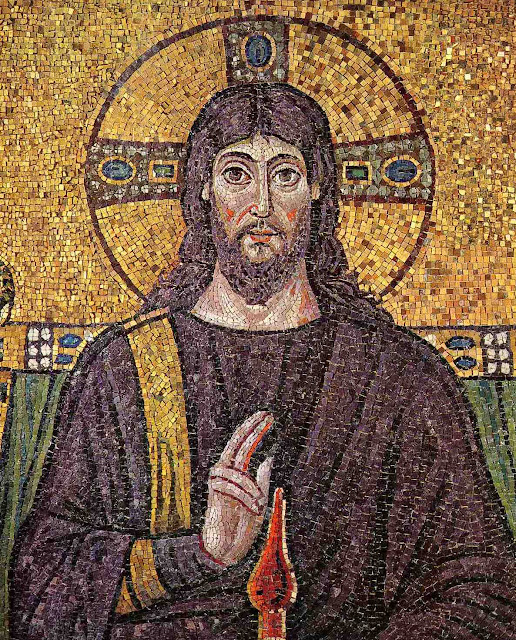 (Mosaic of Christ from the Basilica of Sant'Apollinare Nuovo, Ravenna, Italy, c.526 AD)

Last week I shared with you some of the compelling ways in which the Cross of Jesus Christ was prefigured in the Old Testament. That line of reflection led me to wonder: if the symbolism of the Cross was so firmly entrenched within the biblical tradition, in both the Old and New Testaments, why would the Protestant Reformers have given up on the common use of that symbolism in the daily prayer-lives of ordinary Christians? If God was writing the symbol of the Cross into Jewish experience without them even knowing what it meant, then surely it should be permissible for those of us who do know what it means to honor it by using one of the most ancient traditions of the Christian faith: praying with the sign of the Cross.

"Crossing" oneself in prayer was such an early development of Christian practice that we can't actually trace where it comes from. We know for certain that Christians were already using the sign of the Cross in the mid-3rd century, and by that time it seems to have already been regarded as an ancient and venerable practice. It continues to be used, of course, in the Catholic, Orthodox, and Anglican traditions, as well as a few others. Most Protestants, however, have long since rejected it as part and parcel of medieval Catholic superstition: the idea that waving our hand in a certain way will somehow give us magical protection or curry greater favor with God. But that's not really the essence of the sign of the Cross--it is simply a "body prayer," a way to profess with our physical form (which is as much a part of us as our soul/spirit is) the truth of what we believe, and to implore the continued application of the all-saving grace of Christ over our lives.

So if you've never used the Sign of the Cross in your prayers before, give it a try. You will probably very quickly come to like it; I certainly have, to the point where I miss being able to use it when I'm praying in the corporate worship of my Baptist church. A couple pointers on form, if you're inclined to give it a try: the oldest variant, which comes to us from the Eastern Orthodox churches, is as follows--to place the tips of your thumb, index finger, and middle finger together (signifying the Trinity), keeping your ring finger and pinky pressed together into the palm of your hand (signifying the two natures of Christ in the Incarnation); with your hand thus arranged, tap your forehead, then down to the center of your chest, then up to your right shoulder, and finally across to your left. You can finish by bringing your fingertips to your lips if you desire (a motion recalling the burning coal that touched Isaiah's lips in Is. 6). A variant on this motion is the common Western method, used by Catholics and Anglicans, which modifies the right-shoulder-to-left-shoulder motion preferred by the early church to the more familiar left-to-right of their contemporary practice. Both Orthodox and Catholics can come up with intriguing symbolic meanings for these variations. For both groups, the forehead-to-chest motion signifies Christ's descent from heaven to earth for our sakes. For the Orthodox, the right-to-left motion indicates the scope of the Gospel, for Jews and for Gentiles (reflecting a common early concern of the New Testament period). For Catholics, the left-to-right variant indicates the movement of redemption, that we who were far away from God have now been brought near. Either way is acceptable; I tend to favor the Orthodox method, as being historically the older one, but many people find the Catholic method to be a more natural motion. These are just the basic outlines of the method; but the prayer of the Cross is flexible. Many Orthodox believers use a wide, sweeping motion that reaches almost all the way down to the floor and resembles bowing. Or, for Protestants who want to use the sign of the Cross in corporate worship while not drawing attention to themselves, it is entirely permissible to simply trace a small cross-shape with the tip of your thumb, either in the center of your chest or on your forehead. (This is a nice way to work it into your public prayer-life without being too overt, because the unfortunate fact is that in many evangelical churches, it is still something of a stigma to be perceived as "too Catholic," and this method of making the sign of the Cross is easily disguised as an idle scratch.)

So, in my daily devotional life, I've come to use and treasure the sign of the Cross, and I've also incorporated it into the prayer-practices of my church, using the sign of the Cross to anoint with oil during prayers of healing, as laid out in James 5. It's a practice I would recommend to anyone looking to find ways to refresh their prayer-lives.
Email ThisBlogThis!Share to TwitterShare to FacebookShare to Pinterest
Labels: Church Life, Devotional Reflections, Prayer
Newer Post Older Post Home