The Sign of the Cross in the Old Testament 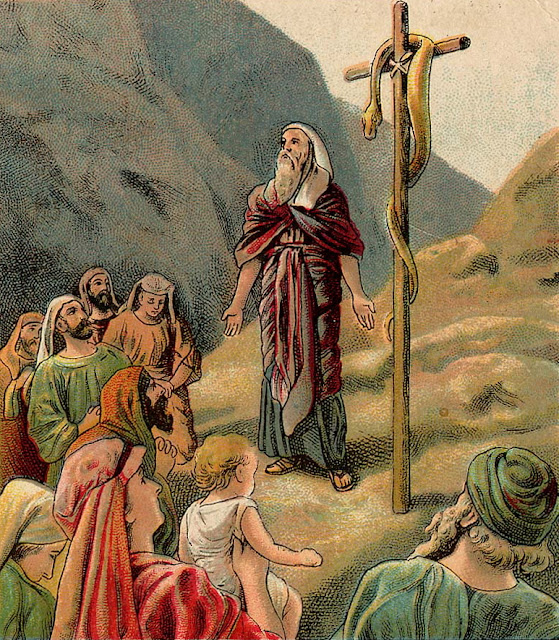 (Image: "The Brazen Serpent," by the Providence Lithograph Company, 1907)

At certain points in my life, I've come across the spine-tingling realization that God had written into my experience certain tantalizing hints of his future work in my heart. Specifically, I had an awakening, just a couple years ago, where I realized that a major moment of spiritual growth in my life had been prefigured by a scene in one of my own earlier fictional writings, without my knowing it at the time, but, when looking back on it years later, the connection comes through with eerie specificity.

Such things, rare as they are, have given me confidence and consolation in my journey of faith. But what if I told you that God had already done the very same thing, on a much larger scale, with his entire work of redemption? In this past week, my historical research has led me to just such another spine-tingling realization of the masterful artistry of God's plan in history.

In our Wednesday night Bible study, we've been tracing our way through the Old Testament, reading it through the eyes of the early church. One of the distinctives of the early Christian hermeneutic, though too often overlooked in today's immediate preference for the historical-critical method, was to look for foreshadowings of Christ and the church in the pages of the Old Testament. Of course, it's always good to read Scripture with the intention of discovering what it would have meant to its original audience. But, since God knew from before all ages his plan to save the world through Christ, shouldn't we expect to find that plan hinted at through every stage of God's story of salvation history? Indeed we should, and a few texts have been clung to as clear foreshadowings of Christ--the unmistakable parallels in Psalm 22 and Isaiah 53, for instance.

It's not just verbal prophecies that hinted at Christ, though--God also seems to have worked pictorial representations of his coming salvation into the experience of the ancient Israelites. Specifically, the sign of the cross pops up with remarkable frequency, if you know what you're looking for. God instructed the Israelites to make the sign of the cross over their doorways, using the blood of a sacrificed lamb, no less, during the Passover event (Exodus 12:22)--the instructions were to take some blood from "the basin" (and there's a scholarly argument to be made that this refers to the hollowed-out depression at the base of the doorway that naturally occurs in dirt-floor homes), then to put that blood on the top and both sides of the door frame: down, up, right, left--the Sign of the Cross. Later, Moses himself forms the sign of the cross with his arms outstretched, as he prays for the people from the top of a hill (Ex. 17:8-16). As long as he holds his arms outstretched in prayer, standing cruciform above them, the Israelites prevail in their battle. Later on, in the same narrative of the Exodus journeys, Moses is instructed by God to fashion a bronze serpent and lift it up on a pole, and anyone who looked up and saw it would be saved from their impending death (Numbers 21:4-9). This is a story that is explicitly claimed in the New Testament as a foreshadowing of the cross (John 3:14-15), and it's easy to see why: the most natural way to affix a fake snake on a pole is to add a crossbar to drape the serpent over. Thus, simply put, God told Moses to make a wooden cross and put it in view of the people as a sign of their salvation. Add to these stories the symbols of the cross seen in the redemptive efficacy of Moses' staff, in the "tree" thrown into the bitter water to render it sweet, and in the miracle of the budding of Aaron's staff, and you have a multilayered series of visible symbols, all throughout the Exodus narrative, the prototypical story of God's redemption, all pointing to the Cross.

Most of these I already knew after years of Bible studies and sermons. But in the past few weeks I've been made aware of a new such symbolic appearance of the cross in ancient Israelite history. In the book of Ezekiel, chapter 9, the prophet sees a vision in which an angel is tasked with going about and marking out the people who belong to the Lord by applying a mark to their foreheads. The Hebrew version of the Old Testament (based on the Masoretic Text) doesn't identify the mark, and neither do most modern English translations. But the Masoretic Text tradition isn't the only version of the Old Testament that remains to us. Another tradition, the Septuagint, though a translation of the Old Testament from Hebrew into Greek (and thus one more step removed from the originals), written around 200 BC, is actually available to us in more reliable early manuscripts than the full Hebrew text, and also happens to have been the preferred version of the early church. Anyway, in the Septuagint version of the Ezekiel story, it actually does tell us what the mark was that the angel applied to the foreheads of the Lord's people--it was the Greek letter tau--that is, in effect, a simple cross. Ezekiel witnessed an angel using the sign of the cross to mark out those who belonged to the Lord.

If that itself wasn't cool enough, here's the kicker. Recent archaeological evidence, analyzed over just the past few decades, has brought to light a heretofore unknown quirk of ancient Jewish scribes. It seems that some groups of Jews (such as, for instance, the Qumran community that produced the Dead Sea Scrolls), adopted this "cross" symbolism from Ezekiel as a helpful shorthand way to designate Messianic expectations. Thus, if a Qumran scribe was transcribing a passage from the Old Testament, and felt like it might contain a prophetic indication of the Messianic age, he would put a small symbol of a cross in the margins to indicate his assessment. So it all comes down to this: apparently, even without the Jews' full knowledge of what that symbol really meant, God had worked the sign of the Cross into the very fabric of Jewish expectations for their Messiah and for the coming redemption of God, long before Jesus ever stepped onto the scene! I don't know about you, but that gives me chills of wonder, and moves me to praise at the artistry with which God's plan was wrought.

Next Friday I'll follow these reflections up with an exhortation to my Protestant friends to bring back one of the oldest and most venerable of Christian traditions: using the Sign of the Cross in prayer.
Email ThisBlogThis!Share to TwitterShare to FacebookShare to Pinterest
Labels: Devotional Reflections, Theology
Newer Post Older Post Home