Beneath Muhammad's Crescent Moon: The Church of the East, Part 2

This is a continuation of a poem I'm writing on the history of the Church of the East (also known as the Nestorian or Assyrian Church). Part 1 of the poem, from the church's apostolic foundation to the coming of Islam, can be found here. Part 2 takes the story up to the desolations of Tamerlane in the Middle Ages, and then the final installment will come in a future Wednesday post. 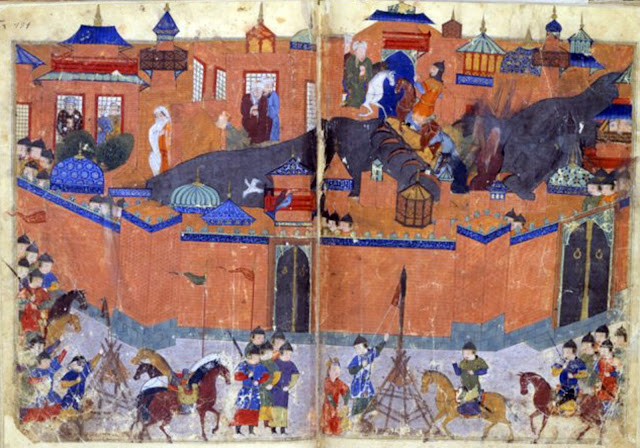 Beneath Muhammad's Crescent Moon: The Church of the East, Part 2

Our Western world owes much to them,
Those holy ancients of the East;
They kept alight the past's great flame
When in the West there long had ceased

The clarion voice of Socrates,
The science, math, and medicine--
The patrimony of the Greeks
Was gone from Rome to Ireland.

It thundered back into the West
When Renaissance's light would come;
'Twas borne on tongues of scholars from
Syria and Byzantium.

Earlier still, the West was heir
To Aristotle's phoenix rise,
When Thomas's "Philosopher"
Was brought to us in Arab guise.

But who had taught the Arabs this,
Logic and Perip'tetic ways?
'Twas scholars of the Eastern church,
Who'd ne'er forgot the ancient sage.

Beneath Muhammad's crescent moon
They worked and lived distinguished lives:
With Christian scholars, doctors, aides,
The Muslim caliphate would thrive.

For half of a millennium
They dwelt in peace 'neath Muslim lords;
Teaching, praying, serving God,
They bore the Gospel, not the sword.

Then tragedies began to mount
All round their churches, homes, and lands;
Crusades that made their Muslim lords
See enemies where they'd seen friends.

Then came the Khan and Golden Horde,
Which wiped away in one great crash
The civ'lization they had known--
All rendered swift to dust and ash.

Next Tamerlane, the Mongol's kin
Who also bore Muhammad's sword,
Would drive them through a nightmare hell
Of churches savaged, blood outpoured.

'Twas Tamerlane who took the church
O'erspanning half a continent
And drove it back to Syrian hills
Where once the great Addai was sent.

And there they stood, steadfast in prayer,
In lands now shared with Turk and Kurd,
Still trusting in Messiah's grace
And leaning on His holy Word.
Posted by Matthew Burden at 5:00 AM