On Taking Holy Orders: What is Ordination All About? 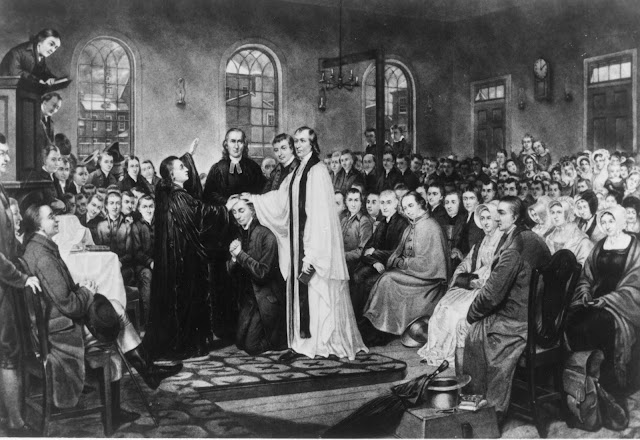 (The Ordination of Francis Asbury, 1784)

This past Sunday, August 2, I was ordained as a minister of the American Baptist Churches (USA). Over the past few weeks, I've had a number of people ask me what ordination is all about. This is a good question, especially in the Baptist context, where ordination is often undertaken after a person is already in pastoral ministry (as with me, five years into my pastorate), and changes nothing, at least in the practical sense, of his relationship with the local church. So what is ordination, and why is it important?

It's important, first and foremost, because it is part of the practice of the church from its very earliest days: to recognize those who are called to ministry, to set them apart, and to commission them, often with the laying on of hands. This course of action is seen throughout the New Testament, from Jesus calling his disciples to Paul encouraging Timothy to remember his own ordination. This process was known in the early church, and still today in the old magisterial traditions, as "taking holy orders." Orders (from which we get the term ordination) referred simply to categories of civic officials in the ancient world; these particular orders, however, were "holy" in that they were the officers of the church of Jesus Christ. In the ancient church, three orders were recognized: deacons, presbyters ("elders," the office that came to be associated with priests/pastors), and bishops ("overseers"). It's worth noting that in many Baptist traditions, pastors are seen as overseers, the church leadership team as elders, and the service-oriented ministers of the church as deacons. In any case, ordination is the biblically-attested process of affirming a person in one of these offices.

Among Baptists, ordination is the final step of the church's affirmation of a minister's calling. We believe that people are not merely called by God through some kind of mystical inner experience, but also through the discerning work of the Holy Spirit as it speaks through the whole body of believers. And we Baptists take that process of discernment seriously. This means that we are not in a rush to ordain someone who shows some gifts at preaching, because we recognize that the calling to ministry requires more than just a facility in preaching. It calls for a certain kind of virtuous character, for a whole range of activities and offices which do well to have some oversight and practice before they are fully affirmed. Thus, our practice as Baptists has always been to license a gifted person for ministry in the church, such that they can exercise their God-given gifts for preaching, teaching, pastoral care, etc., as the opportunity arises. This often takes the form of their being installed as the pastor of a local church so that they can minister their gifts while they and the congregation explores their calling. If, in the course of this early stage of ministry, the gifts of the pastoral office are demonstrated, then the pastor is expected to proceed toward ordination. This usually includes an educational requirement, because we believe, based on our collective experience, that the best pastors are those that have a firm grounding in the Bible, its interpretation, and the traditions of Christian theology and practice. After the educational requirement is filled, the actual course of ordination in my denomination includes two rounds of theological and personal assessment, first with a board of other pastors and then with a council of delegates from our local association, followed by the proclamation of ordination and the laying on of hands at an ordination service performed by the church that has discerned and affirmed one's calling to ministry.

What, then, does my ordination mean, and what does it accomplish?

1.) It means that, after having observed and assessed my spiritual gifts in action over the past five years, the local church, through the discernment of the Holy Spirit, has affirmed that I am indeed called by God for the purpose of pastoral ministry.

2.) It means that I have been officially set apart and consecrated for this work by the action of the local church, commissioned as an under-shepherd of Jesus Christ.

3.) It means that I have completed all of the studies that our Baptist family requires of its ministers, and have been approved in the theology and practice that I teach.

4.) It means that I'm now accredited to work as a minister with our larger family of Baptist churches on a number of communal initiatives, including the work of our denominational committees and institutes of theological education here in the state of Maine.

5.) For me as a writer, it also means that any future works of theology or practice that I produce will be able to recommend themselves as coming from a higher standard of accreditation than if I were unordained.

6.) And, on a personal level, it is a valuable affirmation of who I am and who God has called me to be. Pastoral ministry is such a challenging endeavor, filled with calls for such a broad range of skills, that even the best pastors in the world often falter and doubt that they are cut out for this kind of work. I, too, have had to labor through seasons of doubt, as an introvert and an academic working in a field that calls for many extravert skills and doesn't always appreciate academic ones. But with my ordination in place, I now have the affirmation not only of my own general sensibilities as to the spiritual gifts God has given me, but the clear voice of the Holy Spirit speaking its affirmation towards me through my fellow pastors, my fellow churches, and the people of my own congregation, who have observed my ministry and who know both my strengths and my weaknesses nearly as well as I do. And that affirmation is priceless.
Email ThisBlogThis!Share to TwitterShare to FacebookShare to Pinterest
Labels: Church Life, Devotional Reflections, Theology
Newer Post Older Post Home