A Simple Act of Faith 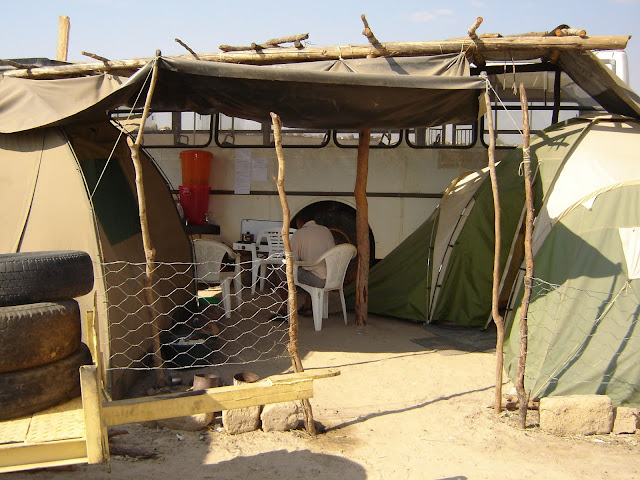 Home, sweet home: Our mission camp in Angola, where I lived for 6 months

Here's a story from my missions work in Menongue, Angola back in 2006. Menongue was a backwater city that had been known as "the place of no return" during the civil war, and its surrounding countryside was still littered with active land mines. Over the course of my six months there, I engaged in a number of projects for my missions team, from building projects to discipleship classes, but the one goal that I hadn't accomplished was to find some way to be active in personal evangelism. This goal was a stretching one for me, both as an introvert and as someone laboring through cross-cultural interactions, but I had learned in previous years the promise and reward of pushing myself out of my comfort zone. After a few months in Menongue, my missions team ran across a box of gospel tracts in our storage, written in both Portuguese and Luchazi (one of the local tribal languages), and I asked my team leader for permission to hand some out. I was feeling like I had hidden too long behind my poor mastery of Portuguese, and that this was one way that I could finally reach that goal of personal evangelism in Angola. I had a fair guess that tracts would be a good way to do it, because there was a general dearth of reading material for any literate person in that city, and because everyone was interested in finding out what the white people were up to. Still, as an introvert, going up to a stranger and initiating contact, even for something so simple as handing out a tract, terrified me. But with a deep breath for courage, I took a handful of the tracts and prayed for the courage to hand out at least one—that was my only goal for the day. I walked down to the World Food Programme tents, praying that God would direct me to someone. There I saw a mute man sitting by the gate. I asked him, in my memorized Portuguese phrase, if he would like a tract, and he nodded. So I handed him one, invigorated that I had accomplished my goal. Just then I heard someone shouting at me from the street. There, just a few paces away, was a parked bus full of Angolan soldiers, all armed with assault rifles. Calling to me in Portuguese, the soldier made clear that whatever I had just given to the mute man, he wanted one too. So I walked over and handed him a tract. And then, in the space of about five seconds, a wave of arms reached out from the bus windows and a host of passersby surrounded me, demanding their share of whatever I was giving. I started shelling the tracts out left and right to all the soldiers on the bus and crowd around me. So, just like that, in about thirty seconds I had given the whole stack away, after thinking it would be an accomplishment just to hand out one! Sometimes God's response can surprise us, if only we would be willing to step out and dare to do something, even something small, for him.
Email ThisBlogThis!Share to TwitterShare to FacebookShare to Pinterest
Labels: Devotional Reflections, Recollections
Newer Post Older Post Home