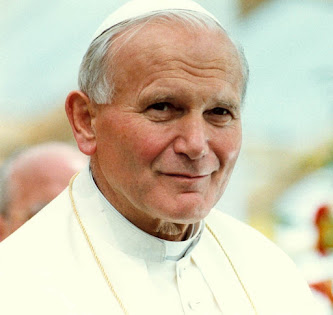 (Click here for an introduction and other installments of this series)
Lecture audio: John Paul II & Mother Teresa
(click here to listen or right-click to download)
Without warning, a furious storm came up on the lake, so that the waves swept over the boat. But Jesus was sleeping. The disciples went and woke him, saying, “Lord, save us! We’re going to drown!” He replied, “You of little faith, why are you so afraid?” Then he got up and rebuked the wind and the waves, and it was completely calm. - Matthew 8:24-26

Then the righteous will answer him, “Lord, when did we see you hungry and feed you, or thirsty and give you something to drink? When did we see you a stranger and invite you in, or needing clothes and clothe you? When did we see you sick or in prison and go to visit you?” The King will reply, “I tell you the truth, whatever you did for one of the least of these brothers of mine, you did for me.” - Matthew 25:37-40
Pope John Paul II (Karol Wojtyla): Basic Facts
- Karol Wojtyla (1920-2005) was a Polish priest who rose through the ranks of the Roman Catholic church to become Pope John Paul II. He was instrumental in sparking a nonviolent protest movement that led to the fall of Communism in eastern Europe, and he strove to rebuild connections between estranged Christian denominations. He is regarded as one of the most inspirational Christian leaders of the past century.

- Wojtyla saw his native Poland fall successively under Nazi and Communist rule. Much of his training as a priest had to be done covertly. He later became the first non-Italian pope in 450 years.
Themes of Wojtyla's Ministry:
- An Attitude of Hope – John Paul II made his primary theme one of hope and encouragement rather than criticism or judgmentalism. Perhaps his best-known message was “Be not afraid.”

- Nonviolence – He continually encouraged peaceful means of reconciliation rather than war, even in the Cold War conflicts which affected his homeland of Poland.

- The Church as an International Community – He was by far the most well-traveled pope in history, making personal visits to all corners of the globe, even areas that had often been hostile to Catholic Christianity. He saw the entire world as the parish of the Christian church.

- Interfaith Reconciliation – John Paul II blazed new territory by entering into dialogues of reconciliation with leaders of other denominations and faiths, including the Eastern Orthodox Church, Lutherans, Anglicans, evangelicals, Jews, Muslims, and Buddhists.

- The Importance of the Family – In contrast to much of Catholic history, where the laity’s role had been neglected in favor of priests and monks, John Paul II affirmed the role of laypeople. He placed special importance on parenthood and the traditional family as a God-given vocation.

- The Sanctity of Human Life – He was a constant champion of human rights for all people, and thus became a powerful voice against abortion and the death penalty.

- Healing the Past – He overturned Roman Catholic culture and tradition by offering apologies for many of Catholicism’s errors, including the church’s involvement in medieval persecutions of heretics, wars against Protestants, slavery, the exploitation of Third-World peoples, persecutions of Jews, and the Holocaust.

- The Value of Science – John Paul II accepted the place of scientific research as a legitimate way of learning about God and His creation. He apologized for the church’s treatment of Galileo five hundred years earlier, and he opened the way for a cautious dialogue with evolutionary theory.

Quotes:
“Do not abandon yourselves to despair. We are the Easter people and hallelujah is our song.”

“Christ’s answer to our question ‘why?’ is above all a call, a vocation. Christ does not give us an abstract answer, but rather he says, ‘Follow me!’ He offers us the opportunity through suffering to take part in his own work of saving the world.”
Mother Teresa (Agnes Gonxha Bojaxhiu): 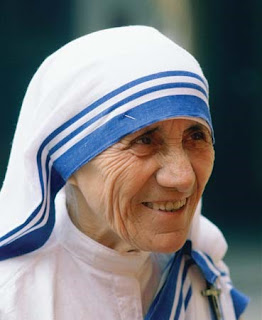 - Mother Teresa (1910-1997) was an Albanian nun in the Roman Catholic church who committed her life to missionary service early on. She was sent to Calcutta, India, to serve as a teacher with the Sisters of Our Lady of Loreto. In 1946, she felt God calling her to leave the shelter of the convent and minister to the poor by living among them. Four years later, Rome approved the founding of a new order—the Missionaries of Charity. From that point on, Teresa and her sister nuns devoted themselves to helping the poor, and especially focused on caring for lepers and the dying. Throughout the remainder of the 20th century, the Missionaries of Charity founded new care-houses around the world. Mother Teresa was honored with a Nobel Peace Prize. She is known not only for her selfless service to the poor, but for her writings on humility and spirituality.
“Being unwanted, unloved, uncared for, forgotten by everybody, I think that is a much greater hunger, a much greater poverty than the person who has nothing to eat.”
Email ThisBlogThis!Share to TwitterShare to FacebookShare to Pinterest
Labels: History
Newer Post Older Post Home