Heroes of the Faith: Billy Graham 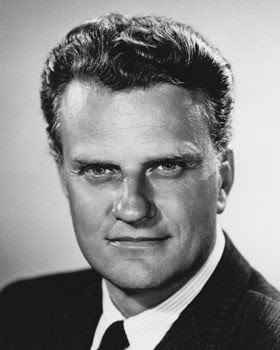 (Click here for an introduction and other installments of this series)
Lecture audio: Billy Graham
(click here to listen or right-click to download)
[This is] the word of faith we are proclaiming: That if you confess with your mouth, “Jesus is Lord,” and believe in your heart that God raised him from the dead, you will be saved. For it is with your heart that you believe and are justified, and it is with your mouth that you confess and are saved.
- Romans 10:8b-10
Billy Graham: Basic Facts 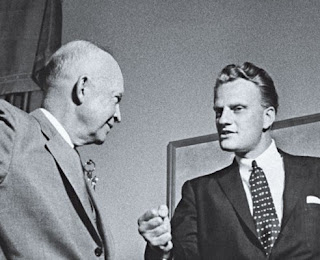 - Billy Graham (b. 1918) is a world-renowned evangelist, perhaps the most prominent voice for the Gospel of salvation in the second half of the 20th century. He has spoken in 187 countries or territories, has written 29 books, has presented his message through radio and television to a global audience of 2.2 billion, and has had more than 3.2 million people respond in faith to invitations at his crusade events.

- Graham perfected many of the revival-crusade techniques passed down to him by Whitefield, Finney, and Moody: the practice of an altar call, of using Gospel music, and of staging multiple-day events in open-access public arenas.

- Graham has been a prominent voice of spiritual guidance to many US presidents. He also aided the campaigns against communism and apartheid, and at times added his support to the civil rights movement in the ‘60s.

1934 – At age 16, Graham is converted to faith in Christ after attending a revival service by the evangelist Mordecai Ham. He applies for membership in a youth group of a local church, but is turned down for being “too worldly.”

1936-38 – Graham studies at Bob Jones College and Florida Bible Institute before transferring to Wheaton College. It is at Florida that he receives his calling as a pastor/evangelist.

1939-43 – Graham studies at Wheaton College and graduates with a degree in anthropology. At Wheaton he meets a fellow student, Ruth Bell, and they wed shortly after graduating. Ruth described Billy at that time as “wanting to please God more than any man I’d ever met.”

1943-45 – Graham pastors a local church and takes over a faltering radio program, Songs in the Night. Graham recruits a baritone named George Beverly Shea to help him with the musical part of the program. (Shea would later go on to perform Gospel music at many Billy Graham crusades.)

1947 – At age 30, Graham becomes the youngest person to serve as a sitting college president during his tenure at Northwestern Bible College.

1949 – Graham becomes a traveling evangelist with Youth for Christ International. He organizes a revival crusade in Los Angeles which stretches on for 5 weeks and garners national attention in the media. This catapults Graham into a prominence which will last for the rest of his life.

- During his ministry, Graham met with 12 different US presidents, sometimes acting as a special advisor on spiritual matters. He is often seen as the “national pastor,” officiating at special services and memorials of national importance.

- While traveling for his worldwide crusades, he was often invited to speak in places where no one else would have been permitted, including behind the Iron Curtain during the Cold War, and in North Korea in 1992.

- Graham’s legacy continues in his family. Many of his children and grandchildren are in ministry. Most prominent are his son Franklin Graham, president of Samaritan’s Purse and Graham’s successor in the BGEA; daughter Anne Graham Lotz, an author and speaker; and grandson Tullian Tchvidjian, pastor of the Coral Ridge megachurch. 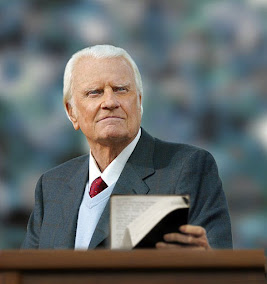 “Being a Christian is more than just an instantaneous conversion - it is a daily process whereby you grow to be more and more like Christ.”

“God is more interested in your future and your relationships than you are.”

“God proved His love on the Cross. When Christ hung, and bled, and died, it was God saying to the world, ‘I love you.’”

“Man has two great spiritual needs. One is for forgiveness. The other is for goodness.”

“My home is in Heaven. I'm just traveling through this world.”