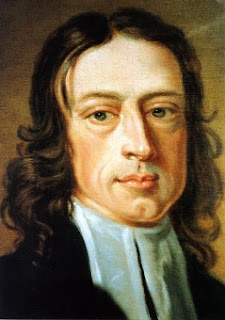 (Click here for an introduction and other installments of this series)
Lecture audio: John Wesley & George Whitefield
(click here to listen or right-click to download)
“When I preach the Gospel, I cannot boast, for I am compelled to preach. Woe to me if I do not preach the Gospel!....Though I am free and belong to no man, I make myself a slave to everyone, to win as many as possible….I have become all things to all men so that by all possible means I might save some.”  – 1 Corinthians 9: 16, 19, 22

“Thanks be to God, who always leads us in triumphal procession in Christ and through us spreads everywhere the fragrance of the knowledge of him….And who is equal to such a task? Unlike so many, we do not peddle the word of God for profit. On the contrary, in Christ we speak before God with sincerity, like men sent from God.”  – 2 Corinthians 2: 14, 16b-17
John Wesley: Basic Facts
- John Wesley (1703-1791) was the fourteenth child of Samuel and Susanna Wesley (they had 19 children, but only 7 survived). John’s younger brother, Charles, would become a co-leader of the Methodist movement and one of the greatest hymn-writers in church history.

- Wesley was a minister in the Anglican Church, but by the end of his life he had become the leading figure of what was quickly becoming a new denomination—the Methodist movement. Today the Methodists and the Wesleyans both claim direct descent from Wesley’s ministry.

- Wesley’s ministry was characterized by some new innovations: (1) a targeted ministry to non-churchgoers (especially the poor); (2) open-air preaching; (3) an emphasis on cleanliness, thrift, and human dignity; (4) an emphasis on social ministries; (5) religious societies centered around a small-group format; and (6) circuit-riding preachers who kept up the network of the denomination. His theological work centered on ideas of holiness and “perfection.”
Timeline of Wesley's Early Life & Ministry 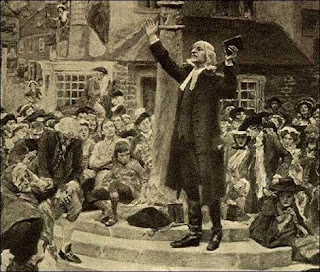 - 1709 – Six-year old John is saved from a fire; for the rest of his life he would consider himself a “brand plucked from the burning” and set aside for a special work of God.
- 1725 – ordained to ministry as a deacon after studying at Oxford University

- 1735 – John and Charles go to Georgia as missionaries; on the crossing over the Atlantic, the ship is caught in a storm, and the two brothers are impressed by the faith and confidence of a group of Moravians who were with them.

- 1737 – After a disappointing end to their Georgia ministry, the brothers return to England

- 1738 – John Wesley has his “Aldersgate Experience” at a meeting of Moravians—he hears a reading from Luther’s Preface to Romans, and feels his heart “strangely warmed.”

- 1744 – After five years of itinerant preaching along with Charles, they hold the first Methodist Conference and set up the organization and network of the new movement
- During his ministry John Wesley rode over 250,000 miles on horseback (a distance equal to ten times around the globe along the equator!) and preached over 40,000 sermons (averaging more than 2 per day!). He was also a productive writer who published more than 5000 books and pamphlets. It was not uncommon for him to draw crowds of up to 20,000 when preaching.
Quotes from John Wesley
“I continue to dream and pray about a revival of holiness in our day that moves forth in mission and creates authentic community in which each person can be unleashed through the empowerment of the Spirit to fulfill God's creational intentions.”

“Give me a hundred men who fear nothing but sin and desire nothing but God, and I will shake the world.”

“The world is my parish.” 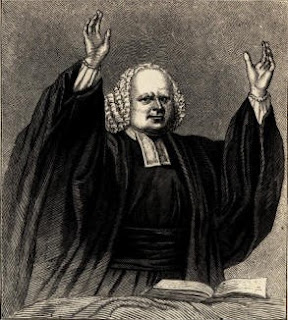 - George Whitefield (1717-1770) was a member of the Wesleys’ “Holy Club” and remained John’s friend for life, despite a disagreement over theology.
- He was the first to attempt the practice of gathering massive crowds for outdoor preaching, a tradition which prepared the way for evangelists like Charles Finney, D.L. Moody, and Billy Graham. He was one of the first to bring some methods of acting to preaching, and was widely regarded as the greatest preacher of his day, sometimes gathering crowds up to 30,000. He spoke to a total of 10 million people in his lifetime.

- He did massive preaching tours in the American colonies, becoming the first true “celebrity” in American history and sparking a revival known as “The Great Awakening.”
Quotes from George Whitefield
“If your souls were not immortal, and you in danger of losing them, I would not thus speak unto you; but the love of your souls constrains me to speak: methinks this would constrain me to speak unto you forever.”

“God forbid that I should travel with anybody a quarter-hour without speaking of Christ to them.”
Posted by Matthew Burden at 5:36 AM