Heroes of the Faith: The Maccabees 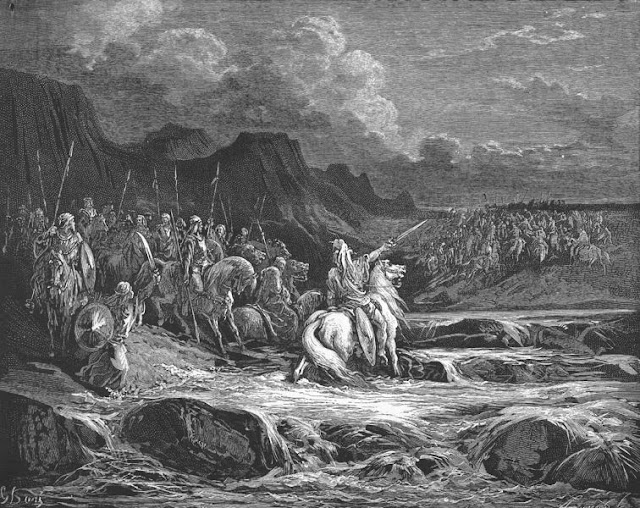 And what more shall I say? I do not have time to tell about [those]…whose weakness was turned to strength; and who became powerful in battle and routed foreign armies. Women received back their dead, raised to life again. There were others who were tortured, refusing to be released so that they might gain an even better resurrection. Some faced jeers and flogging, and even chains and imprisonment. They were put to death by stoning; they were sawed in two; they were killed by the sword. They went about in sheepskins and goatskins, destitute, persecuted and mistreated— the world was not worthy of them… These were all commended for their faith, yet none of them received what had been promised, since God had planned something better for us so that only together with us would they be made perfect.      - Hebrews 11:32-40 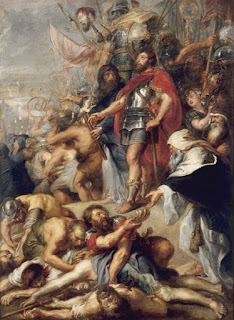 - The Maccabees (2nd century BC) were a faithful Jewish family before the time of Christ who raised a successful revolt against a pagan Greco-Syrian emperor who had tried to eradicate the worship of the God of Israel. Their name comes from the nickname of one of their first leaders, Judas “Maccabeus” (which means “the Hammerer”). They eradicated Greek paganism from Israel, restored the worship of God in the Temple, and ultimately achieved full political independence for Israel until the time of Rome’s ascent to power.

- The story of the Maccabees is found in the books of 1 and 2 Maccabees in the Old Testament Apocrypha, which is included in Catholic and Orthodox Bibles, but not in Protestant ones. Protestants do not consider these books to be inspired Scripture, but great Protestant Reformers like Martin Luther and John Calvin praised them as being recommended reading for all Christians.

175-171 BC – Antiochus IV (“Epiphanes,” i.e., “God made manifest”) becomes the ruler of the Seleucid Empire based in Syria, one of the many successor-states to Alexander the Great’s conquest of the Middle East. Israel is at this time under Seleucid rule, and quite a few Jews want to abandon certain aspects of the Jewish Law and instead adopt the popular Greek cultural fashions flooding through their region. The high priests in Jerusalem begin to appeal to Antiochus for more power, arranging bribes, tributes from the Temple treasury, and even assassinations of one another. Many other Jews, disgusted by all this, begin to resist.

170-168 BC – Antiochus Epiphanes attempts an invasion of Egypt, but is rebuffed by Roman military intervention. Embarrassed, he takes it out on Jerusalem on his way back home, slaughtering many civilians and defiling the Holy of Holies in the Temple. He then decides that he is going to outlaw the Jewish religion—he forbids circumcision and reading biblical books, and forces many Jews to eat unclean foods.

167 BC – Antiochus Epiphanes has his agents go into the Temple in Jerusalem and sacrifice a pig to Zeus on its altar. (Many Jews see this as the “abomination of desolation” foretold by Daniel.) The Temple is renamed in honor of Olympian Zeus, and Seleucid soldiers are sent throughout Israel to force every Jew in the country to make a public sacrifice to the Greek gods. This was the last straw. Out in the countryside was a family of small-town Jewish priests, led by their aged father, Mattathias. When soldiers tried to force him to sacrifice to Zeus, he refused. And when one of his Jewish neighbors went forward and ate a piece of pig-flesh from the sacrifice, Mattathias killed him on the spot. Facing arrest, Mattathias and his five sons fled into the wilderness and raised a ragtag guerrilla army to resist Antiochus and to force all Hellenized Jews (that is, Jews who had gone over to Greek customs) back to observance of the Jewish Law.

166-165 BC – Mattathias dies, and leadership of the group passes to his oldest son, Judas “Maccabeus.” Antiochus dispatches his chief general, Lysias, to deal with the revolt, but Judas, with only 3000 men, wins a series of astonishing victories over the much larger Seleucid army. Judas is able to force a settlement in which Antiochus agrees to revoke his anti-Jewish laws.

164 BC – Judas and his men capture Jerusalem out of the hands of Hellenized Jews, and they rededicate the Temple to the Lord. (This act is remembered and celebrated every year during the Jewish festival of Hanukkah.) Meanwhile, Antiochus Epiphanes dies.

163-161 BC – Judas and his men successfully push back a few more attempts by Antiochus’ successors to re-establish their control of Israel, and they continue to drive out or forcibly convert the Hellenized Jews. Eventually, in a final battle against the Seleucids, Judas dies.

160-134 BC – The other sons of Mattathias continue to lead the Israelites—first Jonathan (160-143 BC), who brings some peace to their relations with the Seleucid Empire, and then Simon (143-134 BC), who in his first year of command wins full political independence for Israel. His successors, the Hasmoneans, would lead Israel as kings and high priests for the next eighty years. 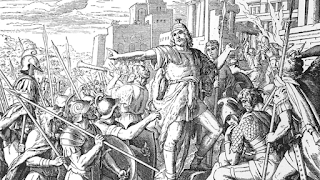 Mattathias: “So observe, from generation to generation, that none of those who put their trust in God will lack strength…My children, be courageous and grow strong in the Law, for by it you will gain honor.” (1 Macc. 2:61, 64)

Judas: “In the sight of Heaven there is no difference between saving by many or by few. It is not on the size of the army that victory in battle depends, but strength comes from Heaven.” (3:18-19)

Jewish martyrs: “Even if for the present I could avoid the punishment of mortals [by worshiping Greek gods], yet whether I live or die I will not escape the hands of the Almighty. Therefore, by bravely giving up my life now, I will show myself worthy of my old age and leave to the young a noble example of how to die a good death willingly and nobly for the revered and holy laws.” (2 Macc. 6:26-28)

“You dismiss us from this present life, but the King of the universe will raise us up to an everlasting renewal of life, because we have died for his laws.” (2 Macc. 7:9)
Email ThisBlogThis!Share to TwitterShare to FacebookShare to Pinterest
Labels: Devotional Reflections, History, Quotes
Newer Post Older Post Home