Glimpses of Grace: The Ladder of Divine Descent 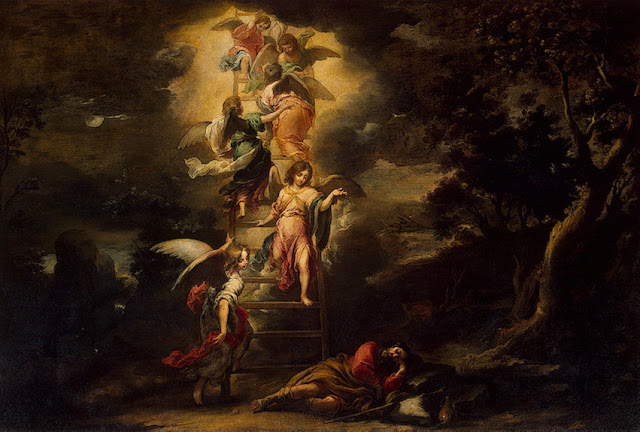 In Genesis 28, we come to the famous story of Jacob's dream, in which he sees a stairway from heaven with angels ascending and descending on it. At the time, he was essentially a homeless outcast, having fled his own family out of fear of his brother Esau's rage. Scripture even tells us that he used a rock for his pillow, which underscores the desperation and deprivation of the moment. Then, as he sleeps, he dreams of a ladder set up on the earth and reaching up to heaven, and angels of God going up and coming down on it. Not only does the ladder reach to heaven, but the dream also specifies that God himself is standing above it, and he speaks to Jacob: this vision becomes the basis of God making his covenant-promise to Jacob, the same one he made with Abraham. At the end of the dream, Jacob interprets it as a sign that God himself was actually present in that place, and he marks the spot with a stone pillar which he anoints, and declares the place to be "the house of God."

This story has produced a number of interpretations throughout the course of Christian history. Several popular possibilities view the ladder as an allusion to the Virgin Mary (as one who, through her pregnancy, becomes the means by which God becomes connected to humanity), or to the communion of saints (the fellow-pilgrims who, having already passed on and made their ascent to heaven, still, in some traditions, offer a connecting link to the heavenly Kingdom), or to a scale of virtues which one must "ascend" in one's Christian practice in order to grow closer to God (as in John Climacus' spiritual classic, The Ladder of Divine Ascent). But all of these connections seem at best to be merely hints, or to be intimations that must be read between the lines. Certainly for those in the evangelical Protestant tradition, allusions to the Virgin Mary and the communion of saints are a bit less compelling than they would be to those of the Catholic and Orthodox traditions. There is, however, one interpretation of this vision which points toward the New Testament and which is actually confirmed by Scripture itself. This vision is all about Jesus.

How, you might ask, is this vision about Jesus? The only person of the Godhead who appears here is the Father, standing in heaven above the ladder. Well, the ladder represents a physical connection between heaven and earth, between God and man (and more specifically, between God the Father and Jacob's family). More than just a physical connection, it is a living, vital link, an active agent through whom the powers of heaven are visibly moving. When we reduce it to its basic meaning in this way, it becomes startlingly clear that this is a vision of the Incarnation of Jesus Christ. Jesus himself is the ladder, and in his human body he is the physical connection-point between God and man, the one thing in the  whole universe that unites us intimately with God the Father. In fact, the text even adds a hint as to the real human body and real human nature that Jesus possessed by specifying that the ladder was "set up on the earth" (LXX version of v.12). Add to this the fact that this vision is the basis of God's covenant-promise to Jacob, which is ultimately fulfilled in Christ alone, and it becomes clearer yet that this dream is all about Jesus. But, if you're still in need of convincing, the New Testament gives us further backing for this interpretation. In John 1:51, when Jesus is speaking for the first time to his disciple Nathaniel, he says, "You will see heaven open, and the angels of God ascending and descending on the Son of Man." This is an unmistakable reference to the Jacob story; Jesus even quotes part of Genesis 28:12 word for word. Here he is declaring to his disciples: "Do you remember the vision of Jacob's ladder? I am that ladder!" Jesus is our connection to God, the link between heaven and earth that makes our covenant-relationship with God the Father possible.

There's one further symbol in Gen. 28 that deserves mention. After Jacob awakes, realizes the import of what he's seen, and declares the presence of God to be in that place, he erects a stone pillar, anoints it, and calls it Bethel--"the house of God." Early Christian teachers took this to be a clear symbol of the church. The place where Jesus meets humanity, the grounding-spot for the reality of the incarnation in our world is the church--"the Body of Christ." We who are mystically united to Christ in his body are the ones who are in contact with the stairway of his incarnation, the ladder of divine descent. A few clues point in the direction of this interpretation. The New Testament regularly refers to the church with both the imagery of a rock (and sometimes even as a stone pillar) and of the house of God, which are the main identity-markers of the stone in Jacob's story  (see Matt. 16:18; 1 Pet. 2:4-8; Eph. 2:19-20; 1 Tim. 3:15; Heb. 3:6). Further, Jacob anoints the stone, which can easily be taken as a foreshadowing of the divine presence of the Holy Spirit poured out upon the church. In this chapter, then, we see two compelling symbols of the plan of God through Jesus: the ladder connecting heaven to earth, which is Christ himself, and the rock on which the ladder rests, which is the church.