Glimpses of Grace: Reading the Old Testament through Early-Church Eyes 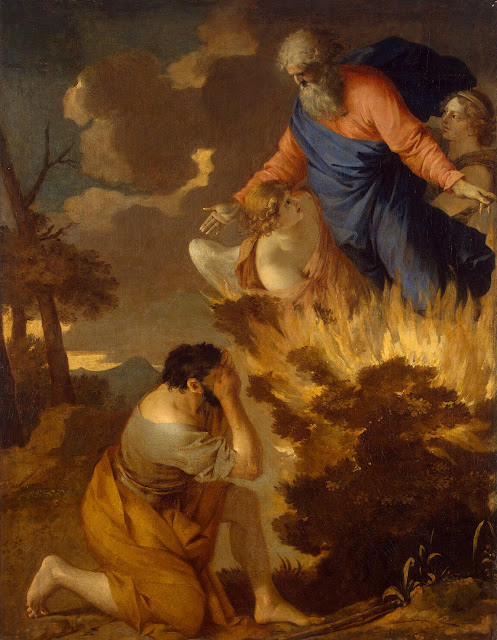 Starting next week, I'll be launching a new series in the "Friday Feature" slot. It will be a Bible study that makes its way through the books of the Old Testament, seeking to find hints and foreshadowings of Christ, the New Covenant, and the Church in those ancient, sacred pages. This course of study was presented to my church's Wednesday night Bible study last year, and was received with excitement and joy.

But it requires some explanation at the outset. Why? Well, because it's not the way that most of us were taught to read the Old Testament. Sure, we might mention a Messianic prophecy here or there (say, when we run into the "Suffering Servant" passage in Isaiah 53), but on the whole we don't set out with the primary goal of finding Jesus in the Old Testament. We evangelicals have been trained in a good and admirable school of hermeneutics: we interpret our Bibles by trying to understand their passages in the context of their own times, with reference to the actual historical events that were happening in the stories themselves. We seldom go looking for hidden threads, and for very good reason: the people who do go looking for hidden threads, most often in search of allegorical spiritualizations, clues to end-times prophecy, or numerological significance, tend to end up very far off track. Such approaches show a penchant for reading whatever they want into the text of the Old Testament.

By contrast, evangelical Protestants have traditionally had such a high regard for Scripture that we have made it our goal to understand what it is actually saying, rather than merely imagining into the text what we might wish it were saying. The great early English Bible translator Miles Coverdale put it this way: "Study [the Bible] carefully. Pay attention to more than the words. Ask who the original subjects and readers were. Consider the circumstances surrounding the passage. Read it in context, noting what comes before and after." This philosophy of biblical interpretation, set out five hundred years ago, is essentially the same method practiced today. It was the method I was taught to follow in seminary: interpreting Scripture in terms of what it would have meant to its original audience. I would affirm that method, and say that it must necessarily be one of the primary lenses through which we read the Old Testament.

But it is not the only primary lens. Certainly, the Old Testament Scriptures were intended to be understood and applied by their original audiences, and we need to understand that message if we are to have any hope of applying the Scriptures to our lives today. But to say that the only thing that the Holy Spirit was inspiring the biblical authors to write to those audiences was a message limited to their own particular time is to give the lie to the whole scope of Christian biblical theology. We believe, and have always believed, that Jesus Christ is the full and final Word of God, the ultimate and unsurpassable revelation of God to man. The Scriptures, as essential as they are, do not have the same revelatory status as Jesus himself does. Rather, they stand as authoritative witnesses to God's great plan, of which Jesus is the summit. As such, Christians have always read the Old Testament through New Testament eyes, and properly so. We recognize that the Old Testament is not a self-contained story, but is the exposition that leads naturally and directly to the narrative climax of the Son of God dying on a cross outside Jerusalem. As such, we can only understand the early exposition with a view to the story as a whole. The Old Testament can only truly be understood in light of Jesus Christ.

But let's push the matter even further. If we believe that the Old and New Testaments constitute one great story, of which Jesus and his New Covenant Kingdom are the climax, then wouldn't we expect hints and foreshadowings of that story to be woven into the very fabric of the story's early structure? Particularly when we consider that Christians have always believed in the Holy Spirit's role of inspiring, guiding, and shaping the holy texts into fit and useful instruments of God's purpose and plan, then it becomes a matter of simple reason that we should expect to find significant markers pointing towards the ultimate direction of the grand narrative, strewn here and there along the way. All that to say, if we believe that God is the author of the story that Scripture narrates, then we must believe that he, as a good author, will have told the story in a way that prepares every one of Scripture's audiences for the ultimate meaning of that story. We should expect to find Jesus everywhere in the pages of the Old Testament.

Interestingly, this was, in fact, the primary lens through which the early church read the Old Testament. Though they would have certainly agreed with our modern evangelical emphasis on a historically-grounded, original-audience reading of the texts, they would not have made the Jesus-centric model of the Old Testament subservient to it. Even within the New Testament itself, it becomes very evident that the earliest Christians were blessed, amazed, and delighted at finding clues to Jesus popping up throughout their ancient texts. For hundreds of years, this was the standard way to read the Old Testament. It was a book of preparation, clearly pointing the way to Christ and the church. (The early Christians' favorite version of the Old Testament was the Septuagint, or LXX, a pre-Christian Greek translation that remarkably preserved an ancient Hebrew tradition of the Old Testament that pointed to Christ in some rather remarkable ways, ways which unfortunately do not always come through quite as clearly in the later Hebraic texts that are now usually used in OT translation.) As such, the scholars of the early church discovered many intriguing signposts that pointed in Christ's direction, signposts that we evangelicals have largely forgotten or overlooked.

For those of us who love the Bible, who have treasured its stories for decades, it can be a joy-giving, wondrous thing to see those stories with new eyes, to find out the delicious secret that lay within them from the very beginning: that all of these wonderful old Sunday School tales, from Adam to Noah to David to Daniel, were stories that told, in whispers of sacred wonder, of the great desire of all longing hearts: our Savior and Friend, Jesus the Christ.
Email ThisBlogThis!Share to TwitterShare to FacebookShare to Pinterest
Labels: Biblical Interpretation
Newer Post Older Post Home