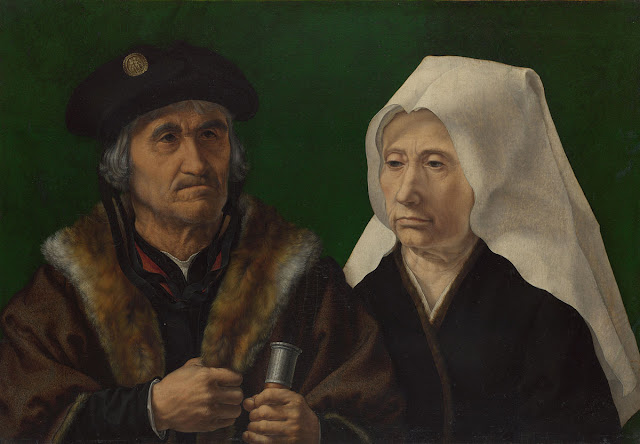 (Note: This article was originally published in 2010)

This week I’ve been thinking about aging. Not that I’m feeling particularly old—I’m far younger than many of my parishioners, not to mention my fellow pastors in the Calais area. But it’s been on my mind, partly because of some reflection I've been doing on 1 Peter 1:23-24, and partly because of a conversation I had with some fellow ministers this week. I was introducing our local Catholic priest to one of the other Baptist ministers, and in the course of mentioning that he and I had gone to the same high school, I added: “At different times, of course.” The Baptist pastor laughed and told me I was “throwing the priest under the bus,” as if pointing out our age difference was a way of shaming him. I hadn’t meant it that way at all, but it got me to thinking about the strange cult of youth in our American culture.

It’s no secret that we Americans worship youth. We fight wrinkles and other signs of aging with every new technique and technology we can think of—creams, poisons, surgeries, and so on—until rather than looking like a respectable, natural 70-year-old, some of our celebrity 70-year-olds look like freakish, pseudo-human 40-year-olds. We pine for the lost days of our youth. We watch movies about idealized young people and their adventuresome way of life. We sequester our elders away in nursing homes and assisted living facilities that, while taking care of them, also serve the purpose of removing them from the daily rotation of our communal lives. Our culture is driven ever more powerfully by the market interests of teenagers (and, increasingly, pre-teens). We glorify the attributes associated with youth—hyperactive sexuality and athleticism—while paying no attention to the classical attributes of old age—wisdom, virtue, and respect. We seldom think of death; and when we do, we claim that we’d rather go out in a blaze of glory than in a long, downhill slide into senility and weakness. We consider it an offense against our dignity that we are obligated to lose our physical and mental prowess before we die. Our culture has a deep-seated dread of aging.

Contrast this attitude with the perspective of Seneca: “Moving to one’s end through nature’s own gentle process of dissolution—is there a better way of leaving life than that?” (Letter XXVI) This is a rhetorical question, and the answer Seneca is shooting for is “No.” The slow, gentle dissolution involved in the natural process of aging is, according to Seneca, the best way to die.

In the vast majority of traditional cultures around the world (including the cultures of the Biblical world), old age is not something to be feared, but something to be venerated. Elders (rather than teenagers) are at center-stage of the culture. They are sources of wisdom and guidance, leaders of family groups, worthy of constant respect. Aging and death are viewed as natural parts of the human life-cycle.

The slow process of aging is helpful both for us and those around us. For us, it teaches us humility—that strength, beauty, and sharpness of mind were gifts of God to us, not permanent possessions worthy of our preening pride. It teaches us dependence on God, rather than the willful independence of those who can do everything for themselves. It teaches us the futility of the hurried pace of modern life, forcing us to live slowly and gently on the earth. And it reminds us that we are not our own; that we belong in community and need other people to help us through life. We come into this life unable to care for ourselves, recipients of tremendous love; and we leave in much the same way. This says to me that that is the natural condition of mankind—to be leaning on each other, to grow in the strength of family and friendship, and not to be ashamed of the fact that we need each other.

The process of aging is also helpful for those around us. It teaches those same lessons to the younger members of our society, if they are open to hearing them. It gives them the opportunity to extend love and care and respect, to be forced beyond a selfish way of living. And the slow process of aging is really a merciful transition for the family we leave behind—rather than having their beloved friend ripped away at the height of his powers, they are able to prepare themselves for the coming of death by walking with him down the long road of age and weakness.

And, of course, we Christians know that this is not the end. While God has ordered death, even in the midst of our fallen state, to be a blessing to us in these many ways, it is still a tragedy. We know, deep down, that it ought not to be this way. It ought not to be the case that the people we know and love are gone forever. And this deep, instinctual feeling that something is inherently wrong with death is one of the pointers towards the truth of eternal life. As C.S. Lewis argued, the fact that we are hungry for food indicates that something to meet that need actually exists (and food does exist). The fact that we desire sexual intimacy points to the existence of such a thing as sex. And the fact that we long for immortality points us toward believing that there is such a thing as immortality. As good and as healthy as the natural aging, dying process can be, it is not the end of the story. And the lessons we learn in age, here and now, will lend an even richer beauty to the immortal, imperishable life that we will one day receive.

It seems to me that the church is one of the few remaining sanctuaries in our society for this cultural practice of honoring the elderly. I’m blessed to be living in a small, rural-area town, where older folks still hold tremendous cultural influence. And I’m blessed to be in a church that honors its older members and harnesses their gifts and passions for the ministry of the church. I was blessed to grow up in extended families and churches which incorporated all age groups, and I learned to love and honor my elders, to respect their tremendous power and potential in the Kingdom of God.

With that rich experience of blessing in my background, I intend to grow old gracefully, to abstain from idle complaints about my failing health, to add to my wrinkles by smiling often on sunny days, and to be a burden of blessing to those who will have to care for me in my debility. I will aim for constant personal and spiritual improvement, so that I am looking forward to my best days and my most effective ministry in the latter days of my life. I will cultivate the incomparable treasure of wisdom, so that the strength of my character in my final years will be so rich and powerful that I would never think of trading it for the mere physical prowess of my younger years. I will embrace the “gentle process of dissolution,” and not bow to the lie that youth must be the best and highest time of life.

Aging is not the enemy. The way we sinfully covet a different phase of life—that is the real enemy.
Email ThisBlogThis!Share to TwitterShare to FacebookShare to Pinterest
Labels: Church Life, Culture, Devotional Reflections, Theology
Newer Post Older Post Home