Jesus' Baptism as a Re-Enactment of Creation 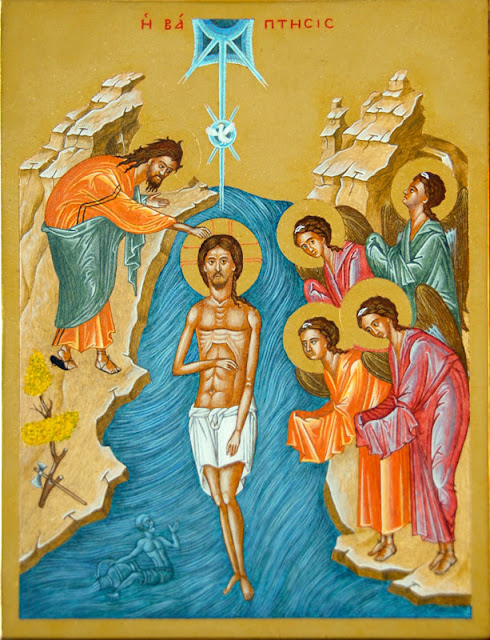 Every now and then I’ll choose to follow the Revised Common Lectionary’s cycle of texts for my evening services (though, truth be told, using the lectionary “now and then,” rather than all the time, is rather like enrolling in an academic course and then dropping in on a class only when the mood suits you). I appreciate the way the lectionary strives to hold together threads of continuity that bind together the Psalms and the Gospels, the Old Testament and the New. This past week, as part of an ongoing reflection on the holiday of Epiphany, the account of Jesus’ baptism was paired with the Genesis 1 account of creation, with particular focus on the Trinitarian presence in the first few verses of that chapter, with the Father creating, the Spirit “hovering over the waters,” and the Son, “the Word,” being the agent by which creation is brought into existence. The more I reflected on this union of passages, though, I began to see more and more linkages between the two, to the point where it began to suggest a rather inspiring answer to a biblical question that I’ve never really seen answered to my full satisfaction.
That annoying little question is, “Why did Jesus get baptized?” In my evangelical tradition, I’ve heard a number of answers thrown out—“He was using it as a sign of radical, full-hearted commitment to God the Father,” or “He was using it as a way to mark the beginning of his ministry,” or “He wanted to be a model of baptism for the generations of Christians to come.” There is, likely, some truth to all of these propositions, but it still doesn’t really break through the dissonance of this act, which John the Baptist sees as glaringly obvious: “I need to be baptized by you, and do you come to me?” (Matt. 3:14) The inherent problem in this situation is that John was clearly preaching and practicing a baptism of repentance—that is, the act of baptism signified a turning away from one’s sins and toward God, and the symbolism of the water was to denote the way in which God would honor such repentance by washing us clean of our sins. Jesus, according to orthodox Christian theology, had no sins from which to repent, so it was exceedingly odd that he would choose John’s baptism as the marker for the beginning of his ministry. And it doesn’t just seem odd to us; it clearly seemed odd to John the Baptist as well. Jesus’ answer, which appears rather vague, doesn’t offer much explanatory power at first glance: “Let it be so now; it is proper for us to do this to fulfill all righteousness.” What could this mean? Was Jesus saying that he was in need or righteousness, or that the act of his baptism would somehow bring righteousness to something else?