Should We Say "Merry Christmas"? 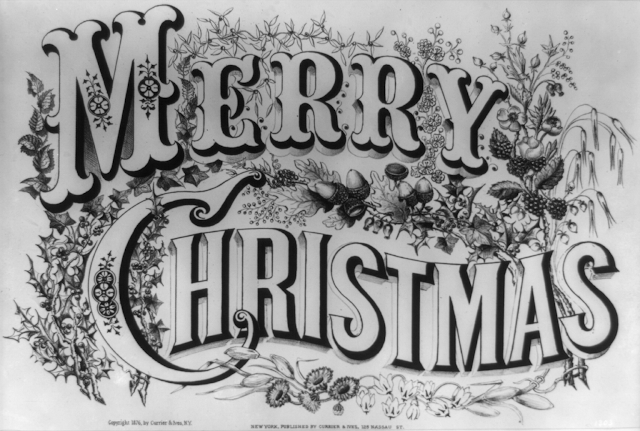 (See the bottom of the post for image credits)

We live in an interesting age, don't we? (Perhaps not quite as interesting as the patristic age, but that's a topic for another day.) This time of year, we break out the holly and the mistletoe, we listen to brazenly theological songs being played on public radio stations, and we vex our troubled minds about the horrors of the "War on Christmas" (not to be confused with the war on Christians currently ongoing in the Middle East, which is not only real but legitimately horrifying). The explosive fulcrum of this dicey debate is the issue of whether one ought to say "Merry Christmas!" to strangers and passersby at this time of year (as opposed to other traditionally festive salutations like "Happy Holidays!" or "Bah! Humbug!").

As wars go, the War on Christmas has the peculiar attribute of inflaming passions while causing almost no casualties, and so it's probably among the most respectable wars ever fought. Why does it inflame passions so? Well, many of my fellow Christians are under the impression that being forbidden to say "Merry Christmas!" is a not-too-subtle attempt by our wider society to forcibly remove the glorified Lord of heaven and earth from the holiday celebrating his birth. And the truth is, they may be right. One of the two main reasons given for the removal of "Christmas" from our seasonal vocabularies is that it is too religious for a widely-celebrated civic holiday, and that it might give offense to the many in our society who are not Christians. (The other main reason--that we live in a pluralistic society, and so saying "Merry Christmas!" instead of "Happy Holidays!" implicitly denies a right of place to other contemporaneous holidays like Hanukkah, Kwanzaa, Saturnalia, and Festivus, thus constituting a form of religious prejudice--is dealt with in this companion post.) 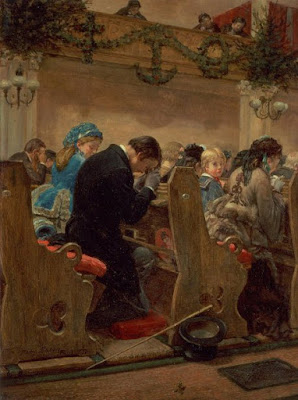 Christmas is, of course, a religious holiday, and perhaps the most wildly religious holiday imaginable, in that it celebrates the astonishing story of the God of the universe becoming a helpless human baby. (A couple days ago my sons, five and six years old, were playing with a nativity set and singing a hip-hop Christmas carol of their own design, which all centered around the various things that they were making the figure of Jesus--whom they called "Baby God"--do: dancing, riding on a donkey, etc. But what struck me in their play was the mind-blowing, ridiculous-but-true nature of the Christmas story, fully present in the simple name "Baby God.")

So, all that to say, of course Christmas is religious. One can't, and one ought not to, pretend that it isn't. That would be rather like the rest of the world all deciding to adopt the 4th of July as their own holiday, but to keep all references to the USA out of the event, and reserve it simply for barbecue, fireworks, and idle lounging beside bodies of water. (Or, I suppose, nearly as absurd as celebrating Saint Patrick's Day by paying homage to an odd syzygy of beer, clover, and the color green, while never casting a thought to the saint himself.)

One point of contention from the other side of the debate is that some poor, hapless non-Christian might be wished a "Merry Christmas," and be so offended by the mention of the God they have chosen not to worship, that their emotions simply would not be able to bear the strain of all that festive goodwill. Thus, (so we're told), one shouldn't wish people a "Merry Christmas," unless one knows for certain that they actually celebrate Christmas. This position seems to assume that the message itself might prove offensive. But that's a rather large assumption. One would be hard pressed to find any offense in celebrating a story about how God, motivated by unimaginable love, reached out to humanity in a breathtakingly beautiful way. Perhaps, then, the contention is that some people are offended simply by being confronted with the reality that other people hold different theological ideas than they themselves do. If so, such people are probably not emotionally fit to be roaming about freely in any society, since differences of belief are a simple fact of human life. Or perhaps some intellectually-sheltered secularists are under the impression that every single sin ever committed by anyone claiming to be a Christian is implicit in the very mention of Christmas. For such people, a good dose of reading is usually a reliable cure, particularly in the fields of reputable history, the philosophy of human nature, the doctrine of hamartiology, and basic logic. Or perhaps the assumption is that the mere phrase "Merry Christmas" is intended to imply a forceful theological imperative: that the hearer should immediately bow the knees of his impious life at the altar of the Baby-God of Bethlehem. 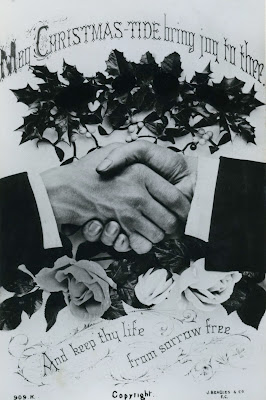 The only trouble is, that's not what 99% of people who say "Merry Christmas" are intending. It's a popular phrase which is intended, almost invariably, as a sentiment of goodwill. It functions in much the same way as that classically Christian statement of farewell, "Goodbye," (derived from "God be with ye"), which sparks almost no protests nowadays because everybody understands that its meaning does not usually involve a significant theological subtext. Merry Christmas, likewise, is usually just a sentiment of simple goodwill. (Now, there may be a few renegade culture-warriors out there who go out of their way to launch volleys of Merry Christmases at vulnerable passersby in the bowels of secular entrenchments out of playful spite, but my experience has told me that the use of "Merry Christmas" as a form of theological artillery is relatively rare.) Since it is intended, far and away, as a statement of goodwill, then simple courtesy would bear upon the recipient to do one of three things: (1) to say "Merry Christmas to you, too," (2) to say "Thank you," or even simply nod and smile, or (3) to say, "Thank you for your kind holiday greetings. I don't celebrate Christmas myself, but I hope you and your family have a wonderful time this year." I myself have lived in a Muslim area where I was offered a customary friendly greeting on the occasion of an Islamic holiday, and I found that it was not too hard to smile and say "Thank you" (Shukran!), rather than to make it a forum for doctrinal polemicism or to file a report of religious persecution. So, to all my secular friends, the wisest course (as is almost always the case) is courtesy. You don't have to say "Merry Christmas," but you shouldn't revile anyone else for saying it to you. Using someone's holiday well-wishes as an opportunity for the display of your own poor manners will probably not make our society any more keen on your position. 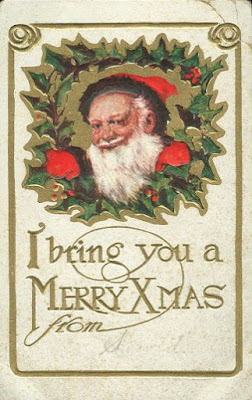 Also, it should probably be noted here that resorting to "Happy Holidays" as your standard greeting suffers from the fact that you are tacitly accepting the idea of "holy days," and also that the common excision of Christ from Christmas by writing it as "Xmas" suffers on two points, (1) in that the abbreviation was originally a Christian invention, an honest-to-goodness Christogram in which the X represents the first Greek letter of the name of Christ, and (2) in that it still retains the reference to a "mass"--that is, a church service--which is proper to the observation of the day. And, while we're at it, if you're really shooting for a secular observance of the holiday, you can't use Santa Claus, because his historical roots are just about as Christian as it gets. Just to be safe, you should probably also avoid holly, wreaths, evergreen roping, candles, Christmas trees, bells, stars, and gifts, since all of those have roots in the Christian tradition of Christmas symbolism. But, on the bright side, you can keep the flying reindeer.

So that's my advice to my secular friends. Now here's my advice to my Christian friends: Don't be jerks. It's pretty simple. The vast majority of people in our country do celebrate Christmas, and will be happy to receive and return your greeting of "Merry Christmas!" But if you happen to greet someone who you think might celebrate a different holiday at this time, or who might be from among the sort who take offense at such things, then it's not too much to ask to simply say "Happy Holidays!" (you are, after all, still sneaking in a little bit of "holy" in there), or to revert back to the common-time courtesy of saying "Have a nice day." For instance, I have some Roman Catholics in my family, a very kind and thoughtful group of people, and they've had the courtesy never once to wish me a "Happy Assumption of the Blessed Virgin Mary Day" (Aug. 15). Likewise, I've only once, in jest, wished them a "Happy Reformation Day" (Oct. 31). 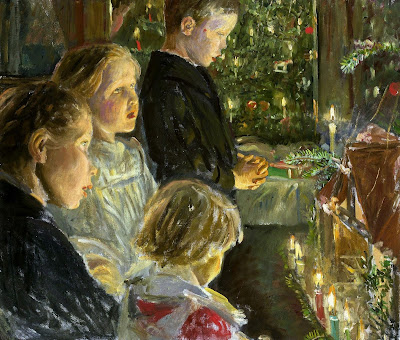 But on a more serious note: let's move our focus from the "Christmas" part to the "Merry" part for just a moment. Christmas may not be a particularly merry time for a great many people, even if they're Christians. Many people actually do have serious emotional difficulties with this holiday--not because they're offended at the idea of Christmas' religious nature, but because their own experience of this holiday may be painful, tragic, or lonely. Many people suffer from deep depression at this time of year, or from wrestling with very hard memories, or from the loneliness of missing loved ones that are gone. So we Christians need to remember that we can't just stop at throwing out a simple "Merry Christmas!" as an expression of goodwill. It's our calling not just to bear witness to the light of the world, but to actually shine that light into the lives of those around us. Let's do everything we can to make Christmas merry, not just for ourselves and our own families, but for everybody else too.

Bottom line: You're not betraying your beliefs by the mere act of being thoughtful to the sensitivities of another person; if anything, you are living out your faith as it was meant to be lived out--in kindness and humility.