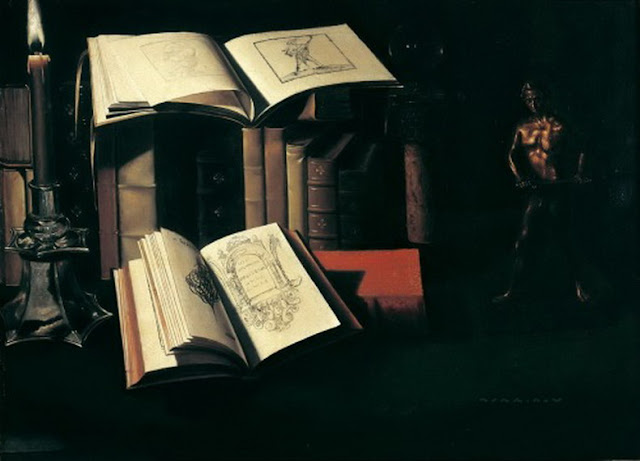 (Painting: "Still Life with Books and a Bronze Statue," by Sebastian Stoskopff, 17th cent.)
I'm sometimes asked for book recommendations, but the truth is that all my recommendations, while hopefully reflecting something of the innate value of a book, are also deeply rooted in my subjective personal experience. So, for my Friday essays during these summer months, I'm going to be giving some brief book reviews and recommendations by relating the works that have been most influential in the various stages of my life. This post represents the final installment in these summer book reviews.

It was a rather natural movement for me to go from reading the fathers and mothers of the early church, into the reading of Eastern Orthodox theology. There's an organic link between the Eastern tradition and the patristic age, as typified by a motto from a prominent 20th-century Orthodox theologian, "Forward, to the Fathers!" It's no exaggeration to say that God has used Orthodox theology to revitalize my personal faith in ways that I never expected, and for which I remain unspeakably grateful. My wife tells me that I may not make it to the end of my life without actually converting to Orthodoxy, but for the moment, I simply stand as a grateful evangelical Protestant, happily in conversation with some of the greatest minds of the Eastern tradition of Christianity, drinking from their deep wells of reflection. Through Orthodoxy I've come to a new and deeper understanding of Christ's atonement, of the nature of humanity, of the shape and destiny of human beings in the salvation wrought by Christ, of mankind's relation to the natural world, of angels and demons, of the sacraments, of the Virgin Mary, and of the end of the world. If that sounds like just about everything in the scope of Christian doctrine, well, it is. Eastern Orthodoxy, having been largely separated from our English-speaking Western Christianity for quite some time, has the power to speak to us about old truths that we've always held in new ways that we've never considered. And many of those new ways of conceiving Christian theology are the direct legacy of the patristic age, preserved through millennia in the Orthodox churches. So if you, like me, have lived as a thoughtful evangelical and still find yourself scratching your head over certain intractable theological problems, then take a gander at Eastern Orthodox theology, and you might walk away with some surprising answers.
Email ThisBlogThis!Share to TwitterShare to FacebookShare to Pinterest
Labels: Book Review, Recollections
Newer Post Older Post Home