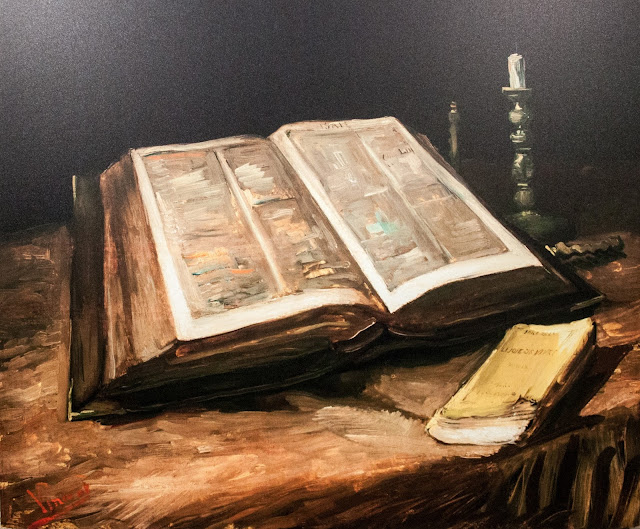 Part of the journey of my seminary education was to be introduced to a whole new genre of books for my reading: works of biblical studies. I had done extensive Bible study on my own throughout the years, making use of commentaries and systematic theologies and other exegetical resources; but until seminary I'd never picked up a volume of scholarly biblical exposition for my own reading pleasure. But it was a natural fit--my love for books and my love for scholarship dovetailed nicely with this academic field, which overlapped so fully with my chosen vocation. Further, biblical studies, with its in-depth analysis of ancient languages, enabled me to put to use the linguistic skills I had gained in my undergraduate studies.

Both of the authors listed for this category stand at the summit of New Testament scholarship, and both are faithful believers in Christ (which is not always a given in biblical studies). I also happened to be a student at a seminary where some of my professors were on a first-name basis both "Jimmy" (James Dunn) and "Tom" (N. T. Wright). So I took to reading their books. Both have the marvelous strength of having their scholarship invigorated by their faith, but at the same time of not having their faith cloud their scholarship (and that's a rarer combination than you might think). Both also stand as voices within what is called the "New Perspective" in New Testament studies, which is concerned with re-evaluating the biblical theology of justification and Law according to ancient Jewish categories of thought rather than through the Lutheran lens which is so instinctive for many Protestants. Dunn is my favorite because of the level of care and clarity in his scholarship, but I deeply appreciate Wright as well--his lay-level commentaries are marvelously accessible, but his scholarly works require a bit more concentration. His strength, which comes with its own particular blind spots, is that he has developed a cogent, overarching biblical theology which ties the New Testament into Second Temple Judaism through the lens of "return from exile." Both are well worth studying, and both have deeply enriched my understanding of the Bible.

Apologetics is the scholarly field concerned with a rational defense of the faith. It has a long pedigree within the Christian tradition, going back as far as the 2nd and 3rd centuries, where major figures in the early church, such as Justin Martyr, Tertullian, and Origen, undertook to answer arguments made by pagans and Jews against the Christian religion. Even after Christianity had become the overwhelming majority religion of Europe, major scholars like Thomas Aquinas still issued works of apologetics (in Aquinas' case, to answer some objections made by Muslims against the Gospel). This tradition remains alive and well within contemporary Christianity, and is amply represented in the fields of science, philosophy, history, archaeology, and interfaith dialogue. As in many such disciplines, there tends to be an upper layer of scholarly work (typified by intellectuals like Alvin Plantinga, Conor Cunningham, and William Lane Craig), as well as a popular-level dissemination (from the works of apologists like Ravi Zacharias, Josh McDowell, and Lee Strobel). Despite the popular conception of intellectual circles, there are several prominent Christian voices at the highest levels of scholarly pursuit in most fields of science and philosophy.

The first work I've listed here is Miracles, by Craig Keener. I didn't actually enjoy this book very much; at the time, I found it annoying. But it was annoying in exactly the way I needed. Like a mallet beating against an anvil, it layered well-documented account after well-documented account of miracles, until it was quite literally impossible to get out of the implication: that miracles happen, especially in Christianity. Keener's overall argument is to state a historical case for the trustworthiness of the biblical account of Christ's miracle-working (Keener is himself a prominent New Testament scholar), and he makes that case brilliantly; but it is his massive account of contemporary miracles that really gives this volume its power. If you're a doubter, read this book, and don't make any final decisions till you've read it all the way through to the end.

The second book, New Arguments for the Existence of God, is a powerful reframing of some of the classic arguments for God, many of which have been around since Aristotle's day (and Aristotle, it must be remembered, was not a Christian, yet by logic alone, he was convinced that he could prove the existence of a Creator-God, a "First Mover"). It's rather technical in places, but with a little concentration, even I, a non-philosopher, could follow it. The idea is that the existence of God can be proved simply from the internal logic of existence itself, from principles that everyone can agree on. Even without the Bible or Jesus or miracles or any other direct revelation, you could still figure out that God exists. If that sounds like a dubious proposition, then read this book--you may be surprised.
Email ThisBlogThis!Share to TwitterShare to FacebookShare to Pinterest
Labels: Book Review, Recollections
Newer Post Older Post Home