Apologetics: Babel and the Nations - from Curse to Blessing 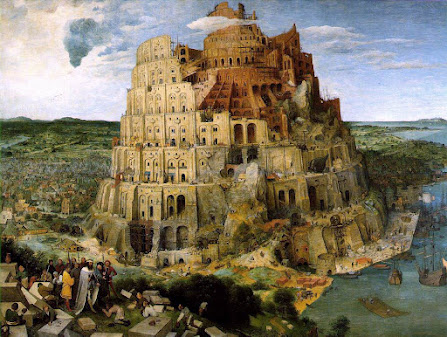 (Click here for an introduction and other installments of this series)
Lecture audio: Babel and the Nations
(click here to listen or right-click to download)
What was the sin of Babel?
- Twofold: pride ("make a name for ourselves") and disobeying God's will (neglecting the command to "fill the earth")
Historic parallels: ziggurats, intended as stairways to reach heaven (complete with a single room at the top for a god to step down and mingle with humans if they so chose), but with no interior rooms. Ziggurats were built simply as massive stairways to reach the heavens, just as the Bible describes. The Tower of Babel, then, was likely a large representative of this kind of structure. To sum up: this exact kind of building was being built in this exact location in the ancient world, just as Scripture says.
Linguistic evidence: Language tends to be more complex in "primitive" language groups, not less complex. Languages tend to simplify their grammar as they get larger and more developed. This means that if you trace languages back to their roots, you should not expect to find them all developing from one simple source, and gradually accruing complex differences from there (as a linguistic theory of evolution might suggest). Rather, the evidence indicates that today's languages go back to a dozen (or more) very complex original proto-languages. Where did they come from, and why did they all appear and develop independently but also concurrently in the distant past? So far, linguistic science has no compelling answers to this question.
Immediately after the Babel story, the narrative shifts from curse to blessing. Although the nations are now dispersed, God reveals his intent to Abraham to bring them all back together in the spiritual blessedness of Abraham's family. Babel, we must remember, is a mirror image of Pentecost, and what God has separated into languages at Babel he will bring back together in the miracle of tongues at Pentecost, healing our divisions through the unity of the Body of Christ.
Email ThisBlogThis!Share to TwitterShare to FacebookShare to Pinterest
Labels: Apologetics
Newer Post Older Post Home