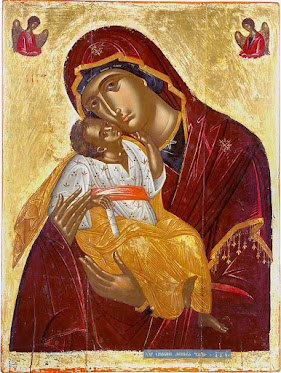 (Click here for an introduction and other installments of this series)
Lecture audio: Prophecy & the Virgin Birth
(click here to listen or right-click to download)
Q & A Supplement
(click here to listen or right-click to download)
Genesis 3:15 - God's curse against the serpent directly foretells the coming of Messiah, born of a woman in a special way:
And I will put enmity between you and the woman, and between your offspring ["seed"] and hers; he will crush your head, and you will strike his heel. (NIV)
- Long accepted as a Messianic prophecy in both Jewish and Christian sources
- Addressed with a view toward Eve, not Adam, which is contrary to what one might expect--it signals the important place of a woman in the Messianic story
- It refers to a woman's "seed"--extremely rare, considering that the terminology of "seed" as "offspring" was usually in the context of a man's fathering of children, never of a woman's--this hints toward a woman bearing a child without the normal context of a human father
Isaiah 7:14 - the prophecy of the virgin:
Therefore the Lord himself will give you a sign: The virgin will conceive and give birth to a son, and will call him Immanuel. (NIV)
- Skeptics often object that the Hebrew word here, "almah," does not refer to a virgin specifically, but to a young woman
- Some scholars (like Eugene Pentiuc) argue that, in point of fact, the word refers to a betrothed young woman living in chaste seclusion from her fiance--exactly the context of Mary's condition!
- Further, the Septuagint translation from Hebrew to Greek, which was written two hundred years before Christ, used a word that specifically refers to a virgin: "parthenos"
Jeremiah 31:22 - a strange detail included in a broader set of prophecies about the coming of the New Covenant:
For the Lord has created a new thing on the earth: A woman will shelter ["encompass"] a man. (NASB)
- The words used here are notable: the word for woman is "nequba," not the normal word, and often used in a gynecological sense--that is, with a focus on female reproduction. The word for man is also unusual--"geber," meaning "strength" or "power," and sometimes referring to a hero or a mighty man.
- So here, in the middle of a prophecy about God's promised New Covenant, we have a reference to a woman's body encompassing a mighty hero, apparently a prediction of the pregnancy of the Messiah's mother.
Email ThisBlogThis!Share to TwitterShare to FacebookShare to Pinterest
Labels: Apologetics, Theology
Newer Post Older Post Home