Heroes of the Faith: the Early Baptists 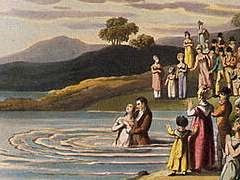 (Click here for an introduction and other installments of this series)
Lecture audio: the Early Baptists
(click here to listen or right-click to download)
Therefore go and make disciples of all nations, baptizing them in the name of the Father and of the Son and of the Holy Spirit.  – Matthew 28:19

Render unto Caesar what is Caesar’s and to God what is God’s.  – Matthew 22:21b
The Early Baptists: Basic Facts
- The Baptists emerged out of the Puritan movement in England in the early 1600s (and from its offshoot, Congregationalism), with a bit of influence from the Anabaptists of Holland.

- The story of Baptists is not a story of any individual “heroes,” but the story of whole congregations. The first Baptist church was a congregation from England who, because of religious pressure, fled to Holland and adopted believers’ baptism.
From Protestant to Baptist
- Most early Protestant traditions, including Anglicanism, continued to hold to infant baptism, participation in sacraments as the mark of a true Christian (rather than individual piety), a parish church system (in which everybody in a geographic area was considered to be part of the local church), and authority invested in a church hierarchy.
- Puritans emerged from mainstream Anglicanism partly by saying that individual piety, not simply participation in the sacraments, is the mark of a true Christian.

- Congregationalists emerged from Puritanism by rejecting the principle of a church hierarchy, instead investing authority in the local church.

- Baptists distinguished themselves from Congregationalists by rejecting the parish system in favor of having a church membership composed only of people who demonstrate the marks of a true Christian life, and also by rejecting infant baptism and arguing for the separation of church and state.
Prominent Early Baptists
- John Smyth, ordained as an Anglican minister, helped lead his Puritan-leaning congregation toward a Baptist position through rigorous study of the Bible. Facing religious pressure in England, they fled to Holland, where they met some Anabaptists and became convinced that infant baptism was improper. Smyth baptized himself, then his whole congregation, in 1609.

- Roger Williams was a minister who emigrated to New England and, in the 1630s, protested against the Congregationalist associations with the state in Massachusetts Bay Colony. He founded the city of Providence, Rhode Island, and built the first Baptist church in North America there. He was also an early advocate for the rights of Native Americans and African slaves.
Baptist Distinctives
- The Freedom of the Believer – Baptists believe that each individual person is free to choose for themselves what they believe, and that they alone are accountable for that decision. Thus no one else can make the decision for you to be a Christian; only you can do that—hence infants are not to be baptized, only believers mature enough to make the decision for themselves. Believers are also competent to read and interpret Scripture for themselves, and they are not compelled to obey any outside authority on religious matters beyond their own conscience (as informed by the life and practice of their local church).

- The Freedom of the Local Church – Every local church is a full representation of the whole Church, with all the spiritual gifts and authority designated to the whole. Thus the local church has authority to read and interpret Scripture, to manage its own property and ministries, and to organize its own practice of faith. It is not beholden to any church hierarchy above it, though it should maintain voluntary associations with other churches for the purpose of mutual edification and for the pursuit of wider ministries. The church is also free from any interference from the state in its organization, practice, and doctrine.
The Early Baptist Movement in Maine: Isaac Case 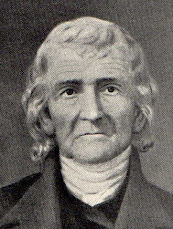 - Rev. Isaac Case (1761-1852) was a Baptist preacher from Massachusetts who felt called by God to minister in the frontier towns of Maine. He served both as pastor and missionary throughout his career, and his preaching-tours took him all over the coast of Maine. Almost all of his travels were done solely on foot. It is said that more than 300 Baptist churches in Maine can trace their roots to his influence (including many in our own association, such as Brooklin, North Sedgwick, and Blue Hill), and that he personally baptized more than a thousand people. Although mainly concerned with evangelism, he would also try to impress the truth of Baptist doctrine on any Congregationalists he came across; on one occasion he caused an entire Congregational church to switch its affiliation and become Baptist. By the time of his death, he had spent 72 years in active ministry.
“He appeared to enjoy religion. Progress, praise, and love to Christ, and defense of the Gospel, seemed to be the happy elements of his everyday life…His general bearing bespoke the reign of peace within…When he came to Maine, he was a young man, only twenty years old. He gave his time and all his energies to the work of the ministry, without any salary from any quarter. Everywhere, among our churches, his memory is blessed.” – Adam Wilson, writing about Rev. Case
Email ThisBlogThis!Share to TwitterShare to FacebookShare to Pinterest
Labels: History, Theology
Newer Post Older Post Home