Glimpses of Grace: The Prophecy of Judah's King

(Note to readers: This is the last "Glimpses of Grace" post from the book of Genesis. I'm planning on taking a break before continuing the series into Exodus. In the meantime, I'll be posting a series of memoir-essays in the Thursday slot about my recent pilgrimage to the Holy Land.) 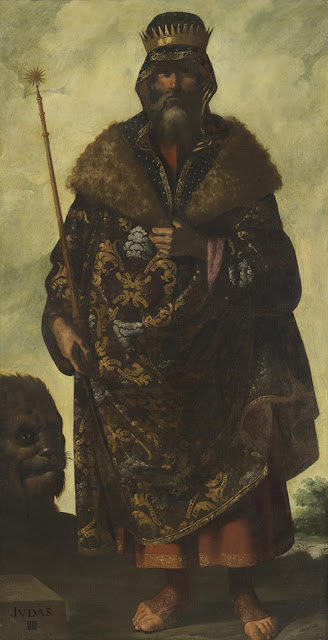 In Genesis 49, we have a series of prophecies made by the dying Jacob over his twelve sons, the patriarchs of the tribes of Israel. Thus far Genesis has been mainly concerned with the character and story of only one of them--Joseph--but in this chapter another son, Judah (who heretofore had not really been a laudable character in the brief events narrated about him), earns a surprising spotlight. Of all the prophecies rendered, Judah's is the most startling (Gen. 49:8-12), not least because it speaks of a future kingship for his tribe.

So what is the content of this prophecy? In verse 8, we see that Judah is prophesied as receiving praise, victory over enemies, and the submission of his brothers. Then in verse 9, a famous image is introduced: "like a lion"--here we have, for the first time, an allusion to the "Lion of Judah." (And, of course, this would come to be one of the titles that the early church ascribed to Christ as the Messianic King.) The end of that verse says, "and who shall rouse him?"--clearly a reference to the obvious dangers of waking a sleeping lion, but early Christians also saw in this phrase a hint of Christ's resurrection.

It's in verse 10 that this passage takes a dramatic turn: the specific promise of an enduring kingship, with one particular Messianic figure in mind: "The scepter will not depart from Judah...until he to whom it belongs shall come." Indeed, the royal house of Israel was reckoned through the tribe of Judah from David's time onward. But the phrase "until he to whom it belongs shall come" is one that presents a tantalizing, multilayered set of prophetic possibilities. Christians and Jews alike have both seen in this phrase a promise of the Messiah: that one day someone would come to whom the whole line of Judah's kingship had always been pointing. Christians, naturally, believe that Christ fulfills that role in its entirety: he is both David's heir and David's Lord, the King of kings. But that particular phrase ("he to whom it belongs") is also a tricky one to translate; most modern translations will note several different possibilities. Another potential rendering is one that says, "until he to whom tribute is due shall come," or, more evocatively yet, "until he who is the gift offering shall come"--if that latter reading is correct, then we have a powerful foreshadowing of the role of the Messianic king as a sacrificial victim. Still other translations will attempt to render the Hebrew more directly, by simply saying "until Shiloh comes." If this reading is correct, it is rather more opaque, but certainly no less poetic and compelling. One possible interpretation would be that it is a reference to the physical location known as Shiloh, which appears most prominently in the Old Testament as the spot where the Tabernacle was placed upon the Israelites' entry to the promised land in the book of Joshua. Thus "Shiloh" would seem to refer to the actual presence of God among his people in the physical space of the land of Israel. If that reading is true, then this turn of phrase seems to indicate that the Messianic king from Judah's line will also be, in some sense, the abiding presence of God in the midst of his people. Whichever way you read that haunting line of "until he comes," it seems to point to Christ, either as the King of kings, as a sacrificial offering, or as "God with us."

And it doesn't end there. Verse 11 speaks of this Messianic king of Judah "tethering his donkey to a vine, his colt to the choicest branch"--a prophecy that is apparently literally fulfilled during Jesus' triumphal entry into Jerusalem and his subsequent teaching of the church as the branches of his vine. Verse 11 also says that he will "wash his garments in wine." That might seem a little odd--washing in wine will not really succeed in washing anything; it will simply leave stains. But if Christ is in view here, then we have a fulfillment of this line that makes perfect sense, for it is through the blood of Christ that we are washed clean from our sins. Here, as in the New Testament, wine is taken as an allusion for blood, and so we have a prediction that the Messianic king will offer cleansing through the shedding of blood. To whom could this be pointing but to Jesus?
Email ThisBlogThis!Share to TwitterShare to FacebookShare to Pinterest
Labels: Biblical Interpretation
Newer Post Older Post Home