Glimpses of Grace: The Sacrifice of the Beloved Son (Part 2 - Symbols of Christ) 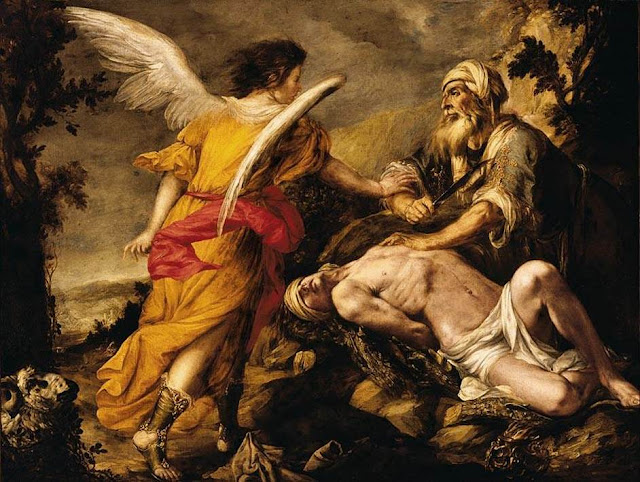 Last week we began our study of Genesis 22, the story of the sacrifice of Isaac, and I offered some explanations as to why God is asking Abraham to do this awful deed. With those considerations in place, we move to an analysis of the specific symbols within this story. And as we'll see, almost every single line points directly to a fulfillment in the sacrifice of Jesus Christ.

Verse 2, right at the outset of the story, has three such hints. First, God tells Abraham, "Take your son, your only son, whom you love..." This language finds a direct corollary in the way that the New Testament talks about Jesus' relationship with God the Father. This occurs in multiple places, not least at the beginning of the Gospels, when God announces over Jesus' baptism, "This is my Son, whom I love" (Matt. 3:17). This connection is strengthened by considering why God refers to Isaac as Abraham's only son, when Genesis itself shows that Abraham has another biological son, Ishmael (though he is largely disinherited). What is only partly true of Isaac, though, is entirely true of Christ--he is the "one and only Son" (John 1:14). Second, in verse 2 God instructs Abraham to go "to the region of Moriah...on a mountain I will show you." Though the region of Moriah was apparently uninhabited in Abraham's day, we now know that site very well. It refers to the mountains of Jerusalem, the place where the Temple sacrifices for sin would one day be set in place, and where Christ himself would die. The only other reference to Moriah in Scripture is 2 Chronicles 3:1, where it is identified with the mount on which Solomon builds the Temple. Therefore, there is a longstanding tradition that Abraham was led to sacrifice Isaac on what would one day be the Temple Mount. A number of Christian commentators, however, have conjectured that, given the number of symbols pointing to Christ in Gen. 22, it might actually be the case that God led Abraham to a different mountain, although close by: the hill of Calvary, along the ridge in Jerusalem that would come to be known as Zion. After all, Gen. 22:2 specifies a mountain in the region of Moriah, and not necessarily Moriah itself. Given that Isaac's sacrifice is a foreshadowing of the cross, it would be eminently fitting for this drama to be played out upon the heights of Golgotha. Third, verse 2 makes clear that Isaac is to be sacrificed as a "burnt offering," a special kind of sacrificial offering that usually had to do with the remission of sins. Not coincidentally, this is the same exact function that Christ's sacrifice enacts for us.

The symbols continue to come thick and fast. Isaac approaches the region of Jerusalem with a donkey, just as Christ would do (v.3). Abraham sees the place where God is leading him "on the third day," which is an oblique but interesting allusion to the story of Christ's passion (v.4). The accompanying servants are left behind, just as Jesus had to face his passion without the presence of his disciples (v.5). As they ascend the mountain, Isaac himself actually carries the wood for the sacrifice, just as Jesus bears the wood for his own sacrifice (the cross) on the mountain of Golgotha (v.6). Abraham's answer to Isaac's question about the sacrificial lamb, "God himself will provide the lamb," puts the words of holy prophecy in Abraham's own mouth (vv.7-8). Abraham may have just been trying to settle Isaac's spirit by not disclosing the whole truth of the situation, but in so doing, the Holy Spirit speaks through him a profound prophecy that will find its fulfillment in Jesus: God does, in fact, provide the lamb for the sacrifice--Christ, offered up on the cross. The binding of Isaac and his placement atop the wood recall the nailing of Jesus to the cross (v.9).

At this point the Angel of the Lord (which, as we have seen in previous studies, may be the pre-Incarnation Christ himself) interrupts Abraham and keeps him from actually killing Isaac. But the hints pointing to Christ just keep coming, even after Isaac's part of the drama is over. Simply in receiving Isaac back, there is a subtle hint of the resurrection of Jesus, as Heb. 11:19 recognizes: "Abraham reasoned that God could even raise the dead, and so in a manner of speaking he did receive Isaac back from death." Instead of offering Isaac up, God provides a ram, caught by its horns in a thicket, which serves as the sacrifice. It's worth noting that the sacrifice here is substitionary, just as Christ dying on our behalf is an example of substitionary atonement--he takes the place for the death that we should have died. In this way, both Isaac and the ram stand as symbols of Christ. Further, the manner of the ram's appearance--caught in thorns about its head--recall the crown of thorns placed on Jesus' head at the crucifixion. (Some early church fathers even liked to point out that the Greek word for ram, as it appeared in their preferred version of the Old Testament text, sounded remarkably close to the Greek titles for both "Christ" and "Lord").

At almost every step of this dramatic story, there is a startlingly clear allusion to the crucifixion of Jesus Christ. As such, although the story clearly also serves as a testing of Abraham's faith, many Christian commentators have taken its primary meaning to be a stark and brilliant foreshadowing in the coming redemption that would be enacted on Calvary two thousand years after Abraham.
Email ThisBlogThis!Share to TwitterShare to FacebookShare to Pinterest
Labels: Biblical Interpretation, Theology
Newer Post Older Post Home