Heroes of the Faith: Lancelot Andrewes and the KJV

(Click here for an introduction and other installments of this series)
Lecture audio: Lancelot Andrewes & the King James Version
(click here to listen or download)
Have mercy on me, O God, according to your unfailing love; according to your great compassion blot out my transgressions. Wash away all my iniquity and cleanse me from my sin.  – Ps. 50:1-2

For the word of God is living and active. Sharper than any double-edged sword, it penetrates even to dividing soul and spirit, joints and marrow; it judges the thoughts and attitudes of the heart.  – Hebrews 4:12
Lancelot Andrewes: Basic Facts
- Lancelot Andrewes (1555-1626) was a prominent bishop in the Anglican church, renowned as the greatest preacher of his day, a scholar of international standing, and a man of intense personal devotion. He helped guide the English church during a divisive period where fights were ranging back and forth between Puritans and Anglo-Catholics about how the church should be constituted.
- Lancelot Andrewes’ main impact in his own day was through his sermons and his advocacy for a church polity that supported the rule of monarchical law in England. Today, he is largely appreciated for his “Private Devotions,” which were published and which have come to be regarded as a spiritual classic.

- His greatest legacy, however, is as one of the “directors” of the translation team that produced the King James Version.
Scholarship – Andrewes was recognized as a linguistic genius early in his life. By the time of the KJV translation, he could speak fifteen modern languages and six ancient ones. He is regarded by some as the best writer of the English language in terms of understanding the power of its vocabulary and the harmonies and rhythms of its syntax. In addition to being a bishop, he was also the founder and dean of several prestigious colleges throughout his career.

Ministry – Andrewes took his ministry quite seriously. He refused to give in to the corruption so common in clergy of his time, turning down prestigious new positions if they came with strings attached. He preached courageous sermons against corruption at the royal courts. Despite his busyness, he always took time to counsel his parishioners, even at a moment’s notice.

Devotion – Andrewes began every day by spending five hours in prayer, nearly as much time as he gave to his scholarship and to the administration of his ministerial duties. His “Personal Devotions” continue to inspire many today. The private chapel where he prayed became so widely known as a place of remarkable holiness that many people asked to be buried there.
A Selection from Lancelot Andrewes' "Private Devotions"
“Two things I recognize, O Lord, in myself: nature, which Thou has made; sin, which I have added…Take away from me that which I have made; let that which Thou hast made remain in me…O Lord my God, if I have destroyed my innocence, have I at all thence destroyed Thy mercy? If I have committed that for which Thou mightest condemn me, hast Thou at all lost that by which Thou are wont to save? Truth, Lord: my conscience meriteth damnation, but no offense equals Thy compassion. Spare me therefore; because it is not unbefitting Thy justice, nor unwonted to thy mercy, nor difficult to Thy power, to spare the penitent…However unclean, Thou canst cleanse me; however blind, enlighten me; however weak, restore me; yea, though dead, raise me. Of what kind soever I am, be it good or bad, I am ever Thine…More canst Thou remit, than I commit; more canst Thou spare, than I offend…Infirm I come to the Almighty, wounded I hasten to the Physician: reserve for me the gentleness of Thy compassion.”
The King James Version 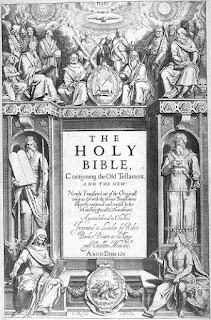 - The KJV was conceived of as a way to bring some healing and unity to a Christian nation that was deeply divided—it was intended to be an “irenicon” that made peace between the Puritans and the high-church advocates in England.
- As such, it was invested with a majestic tone and terminology which avoided thorny theological issues.

- The KJV was produced by a network of scholars (some of them good and saintly Christians, but some of them more politically-minded and a few even dissolute) operating in different translation teams over a period of almost a decade. It used a highly bureaucratic method of correspondence about every line of text until an agreement could be reached on terminology and phrasing. The translators began by consulting the Hebrew and Greek manuscripts available to them at the time in an attempt to make the new translation faithful to the original, inspired documents. (However, they did not have access to the best and earliest manuscripts, which we are now able to consult, and many of the translators were better acquainted with classical Greek than with the koine Greek of the New Testament.) They also consulted previous English translations, hoping to make the KJV acceptable to both the Puritans (who preferred the “Geneva Bible” translation) and the high-church advocates (who used the official “Bishop’s Bible” translation). The KJV translators ended up borrowing heavily from the phraseology of William Tyndale’s earlier translation.

- Interestingly, the KJV did not win immediate acceptance or popularity. Even some of its own translators continued to use their preferred versions (Andrewes, for example, continued to preach from the Geneva Bible). It was only after the English Civil War, after people moved on from the messy political and religious squabbles from which the KJV was born, that it was widely taken up. It became especially valued as a formative text in the new American colonies. Though many new translations can now be more faithful to the original Greek and Hebrew texts because of more widely available resources, new translations have struggled to match the compelling power of the majesty and beauty of the KJV’s prose.
Posted by Matthew Burden at 5:00 AM