Heroes of the Faith: John Knox & the Scottish Reformation 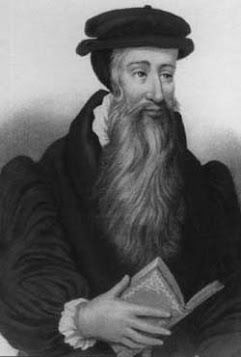 (Click here for an introduction and other installments of this series)
Lecture audio: John Knox & the Scottish Reformation
(click here to listen or download)
You must be on your guard. You will be handed over to the local councils and flogged in the synagogues. On account of me you will stand before governors and kings as witnesses to them. And the gospel must first be preached to all nations.  - Mark 13:9-10

God’s word is in my heart like a fire, a fire shut up in my bones. I am weary of holding it in; indeed, I cannot.  - Jeremiah 20:9b
John Knox: Basic Facts
- John Knox (1513-1572) was an incendiary preacher, pastor, and theologian whose labors took him all across Europe during the height of the Reformation, led him to stand against numerous monarchs, and eventually paved the way for the Bible-based doctrines of the Reformation to permeate his home country of Scotland. The Presbyterian denomination is a direct product of his ministry.

- Knox was courageous and unrelenting, but his hard-edged nature led him to be disliked by many of his contemporaries. Nonetheless, he is probably best understood as being like one of the Old Testament prophets—often reviled by the world because they courageously delivered, without compromise, the word of God. - Knox also promoted radical ideas about politics, including the permissibility (and sometimes duty) of Christians to revolt against an unrighteous monarch. His ideas would have a major impact on the American Revolution.
Timeline of Knox's Life and Ministry: 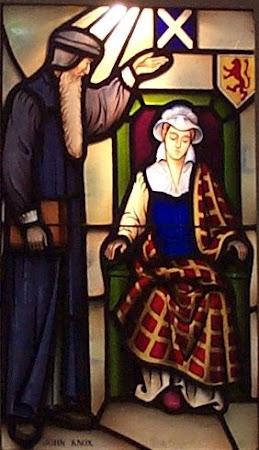 1543-1545 – John Knox, a young Catholic priest working as a private tutor, hears the Reformation doctrines flooding into Scotland from its trade contacts with Germany and France, and is converted to Protestantism. He becomes a disciple of George Wishart, a grace-filled and empowered preacher of the Gospel, and appoints himself as Wishart’s sword-bearing bodyguard.
1546 – Cardinal Beaton, the ruling Catholic prelate in Scotland, is alarmed at the growth of Protestant doctrine. George Wishart is arrested and put on trial. Knox wants to stay and defend Wishart, but the great preacher tells him, “One is sufficient for a sacrifice at this time,” and sends Knox away. Wishart is burned at the stake, and in response, a group of angry Scottish noblemen conspire to assassinate Cardinal Beaton. The French Catholic monarch of Scotland at the time, the regent Mary of Guise, raises an army to punish the assassins, and they flee to the castle of St. Andrews and lock themselves inside. There John Knox joins the revolutionaries.

1547 – The leaders of the rebellion see John Knox’s potential as a preacher and an inspiration to their revolution, so they ask him to become the pastor of the church in St. Andrews. Knox declines at first, but when the whole congregation publicly requests that he take the post, he decides (with tears) to comply, the last straw being a challenge from a Catholic preacher in a nearby village church. He takes up the mantle of preaching and quickly becomes one of the most influential Scotsmen of his day. Unfortunately for him, the French navy blockades St. Andrews until it surrenders, and Knox and many other Protestant prisoners are taken to work as galley-slaves on a French vessel for more than a year and a half.

1549-1553 – Finally released from the galleys, Knox goes to England (Scotland being still too hostile for his return) and is given a pastorate in Northumbria, near the Scottish border. There he meets and marries his wife, becomes famous for his bold sermons, and is eventually appointed to be a royal chaplain, preaching at the king’s court. He involves himself in finalizing the English Book of Common Prayer, the foundational document of Anglican Protestantism. Then Mary Tudor (“Bloody Mary”) ascends the throne and quickly makes clear her aim to return England to Catholicism. Knox, like many other Protestants, is forced to flee to continental Europe.

1554-1558 – Knox travels to the heart of the Reformation, partnering with John Calvin in Geneva and Henry Bullinger in Zurich before taking up the pastorate of an English-speaking church in Frankfurt. There he is embroiled in a debate over which liturgy to use—he composes his own, The Book of Common Order, which is later to become the foundational document of Presbyterianism—but his congregation rejects it, and he returns to Geneva (interrupted by a short, secretive mission trip back to Scotland during which he managed to be condemned for heresy and burned in effigy). While in Geneva, he writes an inflammatory tract against the rule of women as monarchs of Christian nations, which wins him no favor with the queens of England or Scotland.

1559-1572 – Knox is finally permitted to return to Scotland, but one of his first sermons sets off a revolutionary riot aimed against the Catholic church. This movement is so successful that it manages to take over the Scottish Parliament, to outlaw the Catholic Mass, and to compose the “Scots Confession,” a statement of doctrine to guide the new Scottish Protestant church. In 1561, the new monarch, Mary “Queen of Scots,” returns and regularly butts heads with Knox over her practice of her Catholic faith and her desire to marry a Catholic prince. Knox, though respectful of her authority, shows no fear (and no mercy) in these confrontations. Because of his tenacity, Scotland manages to establish a nationwide Protestant church that is independent of the authority of the monarchy (unlike the Reformation movements in Germany or England). Knox pastors the leading church in Scotland, St. Giles of Edinburgh, until his death.
Quotes from John Knox:
“A man with God is always in the majority.”
“Resistance to tyranny is obedience to God.”