The Quest for the King, Scene 19

(Forgive the brevity of this week's installment; the busyness of the season is catching up with me. Nevertheless, we're approaching the climax of the story, with just a few installments left to go!) 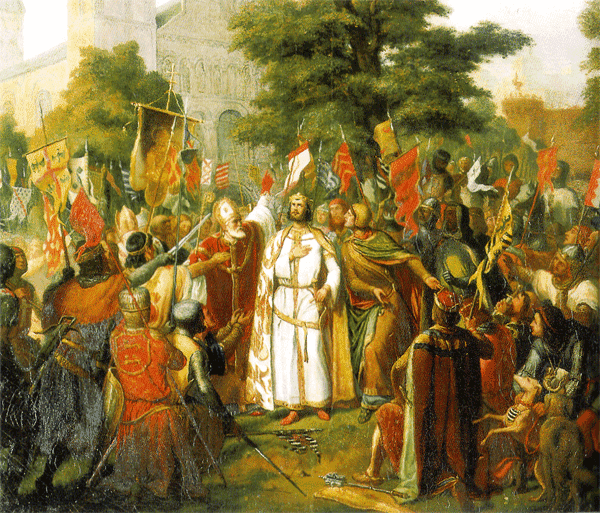 A cascade of drumbeats broke out over the plains, pounding out the rhythms of the Prince’s return. All across the fields of Arrens they could be heard, from every corner where the supporters of the royal house had pitched their tents. And in the center of those fields stood the great city itself: the walls of Arrens, shining amber in the morning light, and the tall, gleaming citadel at its center. The thick lumber of the doors and drawbridges stood tight against the walls, drawn up and fastened. Along the ramparts, in the spaces between the stone battlements, were the bristling forms of the Steward’s army: thousands of spears, javelins, and arrows, sharpened and ready for the fight.
Prince Halbrinnon regarded the city with a quiet gaze. Joe didn’t think he looked much like the leader of an army in that moment. He looked like a mother, tense with the danger of seeing one’s child on the verge of a heartbreaking mistake. His eyes showed the soft strain of compassion and disappointment, backed by the fire of a love that seemed to hold everything together.
“What do we do now?” asked Sim, looking up at the Prince. They had all walked together to the edge of the encampment of his supporters, and from that vantage-point the leaders of the army were all looking out toward the city.
“Now,” said Sir Mack, “we lay a siege around the city and starve the Steward’s men into submission.”
Prince Halbrinnon shook his head. “Those men are my men, too,” he said. “And those people in there, my people. I did not come to starve them, but to set them free.”
“It wouldn’t work anyway,” said Sir Kobi, as the captain of the guard tugged thoughtfully at his chin. “We’d need an army at least twice this size to mount an effective siege. We have a lot of men, it’s true, but Arrens is perhaps the largest city in the world. If we tried to encircle it, we’d be strung out too widely, and the Steward’s men could break through at almost any point.”
“To say nothing of the fact that the vast majority of your supporters here appear to have fled the city with no armor, no weapons at all,” added Captain Drave. “It would be a stretch to call it an army, save for the troops you brought across the sea yourself, my lord.”
“Truth be told,” Kobi continued, “the Steward has the stronger hand here. He has the fortress, and he has the larger army. If he knows that we’re lacking in weapons, he’d be well advised to drop one of those drawbridges and send his cavalry out after us.”
Prince Halbrinnon was silent through the end of this discussion on tactics, his eyes still fixed on the city walls. Then he motioned toward it with a nod of his head.
“Perhaps your prediction has come true, my friend. The Shepherd Gate is opening.”